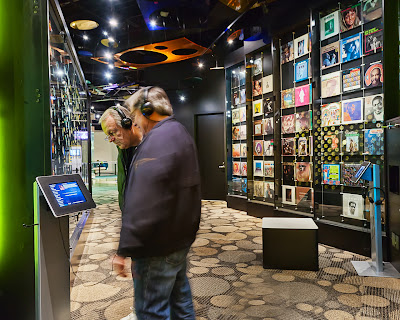 Memphis, TN, USA (February 10, 2012) — The Stax Museum of American Soul Music has just added a half-dozen new super-stars to its musical galaxy — six new iPad Kiosks to give their visitors a musical look inside the phenomenal Stax story.

Last summer, the Stax Board of Directors approached Mr. Reek Havok of Sounds Amazing and asked him to create a musical Stax “star-chart” kiosk for visiting fans.

Reek developed a custom iPad app that showcased the many stars who recorded at Stax and to present samples of their works.

Visitors using the kiosks search for their favorite Stax stars, such as Otis Redding, Isaac Hayes, Sam & Dave, Rufus & Carla Thomas, and Booker T & the MGs. They are rewarded with a synopsis of the artists’ careers, and the artists’ soul hits — just a few feet from the near-exact recreation of the historic Stax Studio itself.

The legacy of Stax Records is a unique one that spans more than half a century. Stax Records has a place in American music history as one of the most popular soul music record labels of all time – second only to Motown in sales.

In 15 years, Stax placed more than 167 hit songs in the Top 100 on the pop charts, and a staggering 243 hits in the Top 100 R&B charts. Among the many artists who recorded on the various Stax Records labels were Otis Redding, Isaac Hayes, Rufus & Carla Thomas, Booker T. & the MGs, Albert King, Johnnie Taylor, Eddie Floyd, the Staple Singers, and many others. All of these artists are included in the new iPad listening station, as well as dozens of more obscure Stax Artists many visitors have likely never heard.

Reek Havok stated, “Design concepts should allow the user to experience the content or the activity in multiple ways. This will facilitate the best learning style for that individual. We put a lot of thought into providing excellent visual and sonic feedback so that it works with children, adults and visitors with various disabilities and unique requirements.”

“We contacted Mike James at Kiosk Group, Inc. Mike and his team put together a custom iPad kiosk design for the museum that was exactly what we needed.”

Located in Memphis, Tennessee, the Stax Museum of American Soul Music is open for visitors seven days a week from April to October and closed on Monday during the winter months. Visit http://www.staxmuseum.com for more information.

Joe Kleimanhttp://wwww.themedreality.com
Raised in San Diego on theme parks, zoos, and IMAX films, Joe Kleiman would expand his childhood loves into two decades as a projectionist and theater director within the giant screen industry. In addition to his work in commercial and museum operations, Joe has volunteered his time to animal husbandry at leading facilities in California and Texas and has played a leading management role for a number of performing arts companies. Joe has been News Editor and contributing author to InPark Magazine since 2011. HIs writing has also appeared in Sound & Communications, LF Examiner, Jim Hill Media, and MiceChat. His blog, ThemedReality.com takes an unconventional look at the attractions industry. Follow on twitter @ThemesRenewed Joe lives in Sacramento, California with his fiancé, two dogs, and a ghost.
Share
Facebook
Twitter
Linkedin
Email
Print
WhatsApp
Pinterest
ReddIt
Tumblr
Previous articleThe main Attraktion!
Next articleSoyuz Spacecraft To Be Displayed Next to Shuttle Trainer at Museum of Flight