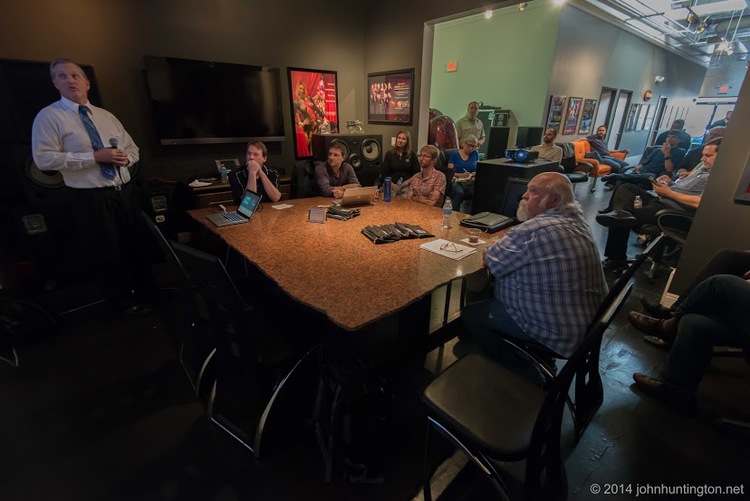 The annual case studies session/Geekout is organized by consultant John Huntington, author of the book, “Show Networks and Control Systems,” and professor of entertainment technology at CUNY (and an extraordinary photographer, and a storm chaser, and…) and Jim Janninck of Timberspring.  The Geekout was held to coincide with InfoComm in Las Vegas this year, and hosted at the offices of All Things Integrated (ATI). We’re indebted to Tommy Bridges of ATI for enabling IPM to attend.

About 25 people from the show control industry gathered for the presentations in which four companies shared show control stories from three recent projects. Don Nolan and Ben Holmes of Entertainment Sciences Group (ESG) talked about the Field of Screams haunt and The Purge:Breakout – a touring, interactive experience promoting the eponymous movie, Stephan Villet and Mitch Schuh of Smart Monkeys talked about the Tom Bradley International Terminal at LAX, and Kevin Ruud of Design Horizons along with Scott Harkless of Alcorn McBride talked about the new High Roller observation wheel at The LINQ in Las Vegas. 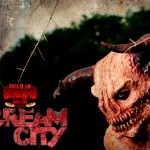 Field of Screams, located near Baltimore, features 4 attractions: Lusion Manor, Hades Hayride, Paintball Apocalypse and Trail of Terror. Nolan and Holmes discussed how ESG met the challenges of setting up asynchronous timelines for these areas, using the company’s proprietary, DMX show control software, VenueMagic. The Purge:Breakout presented a different task – integrating VenueMagic with a controller board running 69 individual audience triggers. Visitors must solve puzzles and interpret clues in order to escape and survive.

“We love show control so much, we work hard to get on very big projects to show the potential and capability of show control,” said Stephan Villet in reference to the work of Smart Monkeys on the new terminal at LAX, described as “an integrated environmental media system in which each feature was part of the architecture.” To meet the scale of the project with its large, high-resolution video walls and other media features with multiple content streams and sources, and need for robustness and security, Smart Monkeys used its ISAAC (Integrated Scheduler and Automated Controller) platform to build a Medialon Manager-based, intelligent show control system, creating an enterprise solution that simulates a network of PCs – without the reliability risks of using actual PCs.

The ISAAC platform at the heart of the system is a Virtualization cluster, comprising enterprise servers and a SAN (storage area network). “The technology allows for unparalleled reliability, redundancy and scalability in an incredibly compact system,” says Eric Cantrell, North American sales manager of Medialon. Villet observed that the airport’s IT department is very comfortable with the system. More details here.

On March 31, Caesars Entertainment opened the High Roller, which ranks as the tallest observation in the world. Kevin Ruud was AV and show control systems designer for a system featuring Alcorn McBride V16 Pros. Ruud was contracted to National Technology Associates. Ruud discussed some of the inherent challenges of communications, power distribution and emergency protocols for a 550-foot-high, moving structure that has no connection to the ground (the wheel). To ensure dependable wireless communications between the wheel’s 28 cabins and the control tower, each data packet is sent more than 100 times. Power distribution is via electrical shoes similar to the way a streetcar operates, and transformers step the power down inside the cabins. Emergency preparation includes redundant backup systems, special communications channels and roof hatches. More information here.

4D effects aren’t just for entertainment anymore, and there’s at least one company demonstrating the power of the olfactory. At the InfoComm opening reception, we chatted with SensoryCo about their work and their recent project, which vice president Michael Mulqueeney and business development manager Cassandra Hoisington refer to casually as “Hazmat City.” It’s the 160-acre Del Valle Regional Training Center, and it simulates a variety of hazardous materials emergency scenarios for training fire departments and other responders.

Hoisington and Mulqueeney explained the reasons that that training simulation environments are now beginning to include aroma with other special effects. Olfactory stimuli connects to the limbic brain, which is associated with longterm memory and emotions. It is thought that this deep conditioning may help emergency responders call up their training more readily when it is needed, and that conditioning will also help to lessen the trauma of real-world versions of these experiences. SensoryCo also works in the visitor attractions market and has done several museum projects. In addition to its aroma products, the company specializes in fog, spray, smoke and water effects.

Judith Rubin
Judith Rubin ([email protected]) is a leading journalist, publicist, strategist, blogger, content marketing specialist and connector in the international attractions industry. She excels at writing about all aspects of design and technical design, production and project management. Areas of special interest include AV integration and show control, lighting design and acoustics, specialty cinema, digital video and world’s fairs. Judith has ties to numerous industry organizations. From 2005-2020 she ran communications, publications and social media for the Themed Entertainment Association (TEA). In 2013, she was honored with the TEA Service Award. She was development director of IMERSA, and co-chair of the 2014 IMERSA Summit. She was publicist for the Large Format Cinema Association in the 1990s, now part of the Giant Screen Cinema Association (GSCA) and has also contributed to the publications of PLASA, IAAPA and the International Planetarium Society. Already making her mark as a magazine and book editor, Judith joined World’s Fair magazine in 1987, which introduced her to the attractions industry. Launching as a freelancer in the mid 1990s she has contributed to dozens of publications and media outlets including Funworld, Lighting&Sound America, Sound & Communications, Urban Land, The Raconteur and The Planetarian. She joined InPark in 2010. Judith earned a Bachelor of Fine Arts from Pratt Institute. She has lived in New York City and the San Francisco Bay Area, and now makes her home in Saint Louis, where she is active in the local arts and theater community.
Share
Facebook
Twitter
Linkedin
Email
Print
WhatsApp
Pinterest
ReddIt
Tumblr
Previous articleEntertainment Design Corporation Announces Macau Subsidiary
Next articleTEA Eastern Division Hosts Mixer August 14 at Discovery Cove