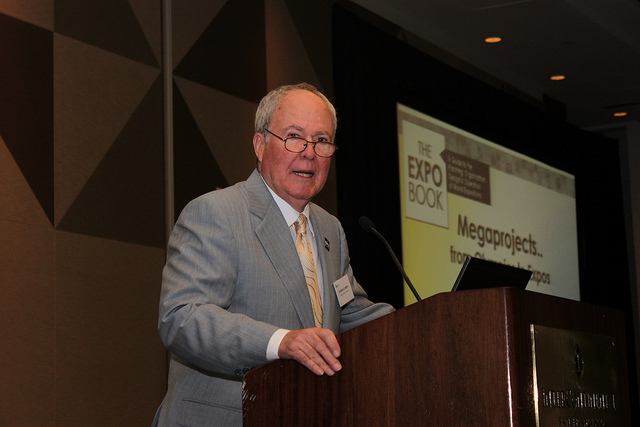 World’s fair specialist and consultant Gordon Linden has just completed “The Expo Master Plan Book” (co-authored with Arman Akdogan) and InPark Magazine is pleased to be first to interview him about it. Linden’s previous title on the subject, “The Expo Book – A Guide to the Planning, Organization, Design and Operation of World Expositions,” was first introduced in serial chapter form in these pages several years ago, edited for IPM by Judith Rubin. Copies of “The Expo Master Plan Book” may be ordered at www.lulu.com. Download sample pages from the book:

How did the new book project come about?

Some years ago I was consulting for the organizers of Seville Expo ’92. They had just completed a “competition of ideas” for the Master Plan for Expo ’92. In reviewing the submissions, they were challenged by the diversity of the proposals, which ranged from the highly fanciful to the very conventional. They were also concerned about how the proposals addressed the legacy phase and how the site could be utilized after closing day. During my meeting with the Director of Site Development, the late Jacinto Pellon, he asked  how past Expos had resolved various master planning issues. This seemingly simple inquiry turned into a study assignment which our team undertook over a period of several months. During that study effort we learned how little information is (even now) readily available about the master plans of prior Expos. A guidebook here, an old newspaper diagram there, a photo book or two, but really, there was very little to be found in the way of detailed plans and descriptions. We successfully completed the study, but as additional consulting assignments came up at later Expos, the need for additional research came up time and again. More recently, in 2012, when I was working as an adviser to the Izmir (Turkey) Expo 2020 Bid Committee, I met Arman Akdogan of IND [Inter.National.Design]. The Izmir Master Planning team included Zaha Hadid, West 8, IND, supported by engineering and environmental consultants. Arman had put together a booklet illustrating the Zaha Hadid Concept Master Plan for Izmir which also included numerous diagrams and graphics of prior Expos. I could see that they were on that same path of inquiry that I had been on for Expo ‘92. Subsequently, Arman and I agreed to collaborate on a book that would expand on his initial work and incorporate the substantial body of additional material which I’d collected in my own research over the years. 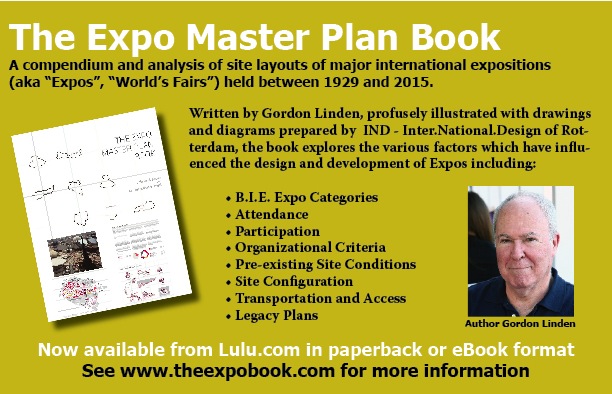 What were the challenges you encountered in producing the book?

Over the years, conducting research for various world’s fair organizers and would-be organizers, I found the materials contained many inconsistencies and contradictory statements that, once published in a magazine or book, tended to be repeated and carried forward to other, later publications. Also, from one unique event to another, the style and language of information presentation differed, making it difficult to compare one to another. In embarking on this effort, I felt that it would be important to try to move past these shortfalls and obstacles, and deliver the most accurate information we possibly could, along with a clear, consistent method of comparison. Once we’d embarked on the project, Arman’s team did a great job in sorting through the various styles of maps, plans, and diagrams and coming up with a graphic style which was then utilized to draw new versions of all of the master plans. These new versions utilized a similar legend of elements that enables the reader to compare the various types of land use as well as other features. We also came up with an extensive typology of data for the Expos which Arman’s team, led by Teresa Papchristou, then produced as a series of infographics which allow the reader to quickly and easily compare and contrast the various features of the different Expos. 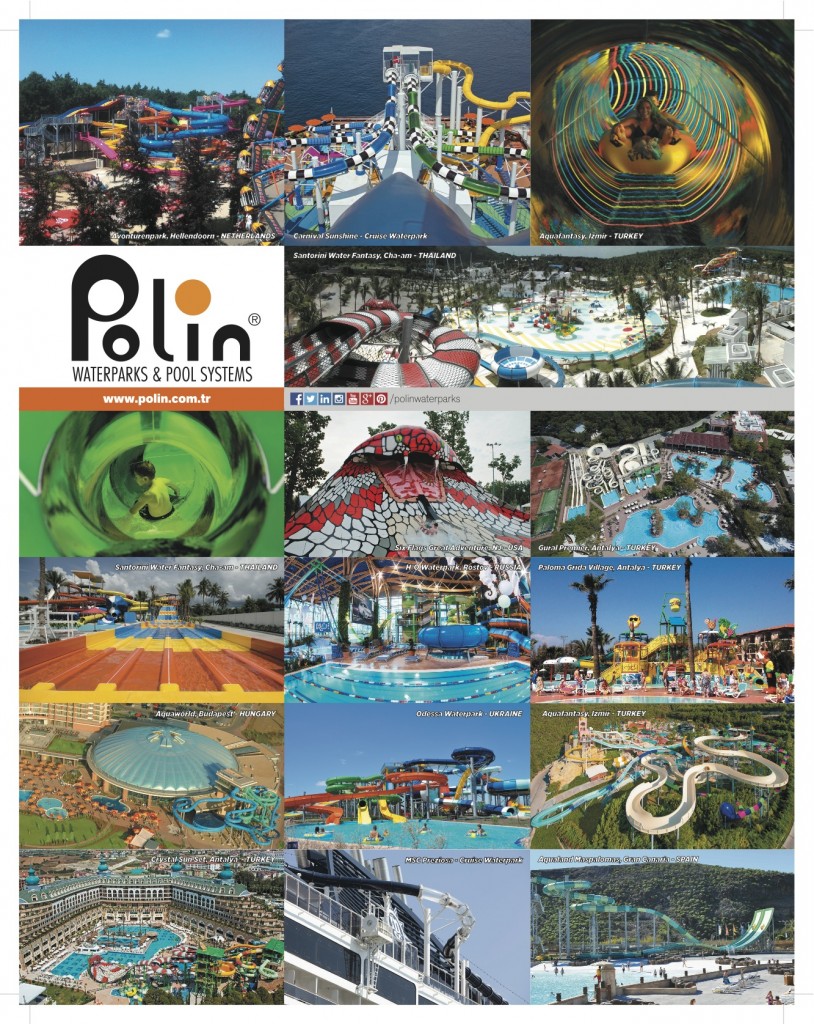 Of all the Expo Master Plans, is there one that stands out?

When you look at the various plans in the book it’s clear that there is no typical or standard Expo Master Plan. Each plan is responsive to a variety of factors which we have analyzed in order to provide a comparative framework for the reader to understand what they’re looking at and why things turned out as they did. Thus, it’s really not possible to say that one is necessarily better than the others, rather that each responds in different ways to the forces which shape the Plan. Our research revealed that most of the Universal Expos (this category is now labeled Registered and refers to larger scale events of 6 months’ duration), such as Expo ’92 in Seville and Shanghai 2010, had orthogonal plans with rectangular or square plots. This made it easier to subdivide the overall site into various sizes of plots for development of pavilions and buildings. However, this formal structure has, perhaps, diminished opportunities for pavilions to capture the character of a special or unique site, instead being compelled to adapt to a fairly rigid framework. Perhaps, having this wealth of historical information now readily to hand in the form of our new book, the organizers of a future Expo will be inspired to explore a different, more organic, layout. I should also mention that the new Recognized Expo format (which has replaced the Specialized Expo category and refers to smaller scale events of 3 months’ duration) has imposed a very specific maximum area requirement of 25 Ha. (60 Ac.) for the international participants which has had a significant impact on master plans. In theory, the area restriction reduces the footprint – and the costs – of the buildings which are to be provided by the organizers to accommodate the international participants. In practice, this has resulted, at Zaragoza 2008 and Yeosu 2012, in three-story structures that require escalators and elevators to move guests and goods between the levels – and the capital and operating costs of such offset any potential savings in site development. I think that the master plans for this Expo format can be improved upon with a little ingenuity.

What else is in the book?

The Expo Master Plan Book also contains relevant material on the subject of Expo buildings and facilities. This is another area where the organizers and planners of today can greatly benefit from studying the experience of prior events, and as an architect it is a natural direction for me. When you look at most picture books of Expos, it’s usually the theme and international pavilions that are featured. Of course, these are the most impressive and dramatic features of the Expo environment. However, the more basic facilities which are also part of an Expo, such as guest services, are usually not shown or discussed. It’s important that Expo committees and designers have access to information about all of the buildings and facilities requirements. It’s also important that readers understand how the requirements vary from one Expo category to another.

Have you got another book in mind for a continuing series?

We’re planning one about Expo Guidebooks. While gathering materials for the Master Plan Book, I added to my collection of guidebooks acquired at various Expos and realized that there is some interesting history in the evolution of guidebooks in terms of design, graphics, and information provided. Some of the recent Expos have explored other means of communicating with guests, such as mobile phone apps, so future guidebooks may take on different forms than we have known in the past, so it will be useful to understand this part of the history of Expos.  • • •