The Franklin Spirit: US participation in Aichi Expo 2005 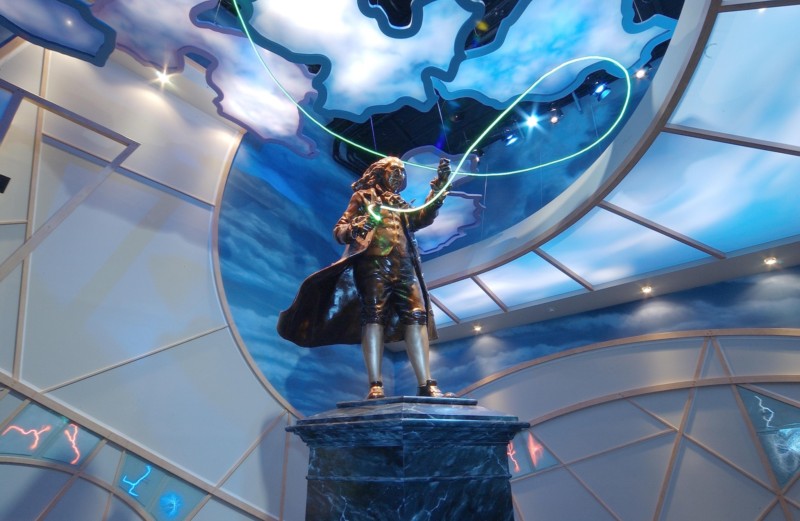 This article, originally published in August 2014, is part of “Tales from the Expo,” an InPark Magazine online book written by James Ogul and edited by Judith Rubin.

The Japanese government’s invitation to the US to participate at Aichi arrived at the State Department on September 17, 2001. On October 4, the Secretary responded that the US would not participate. This was primarily because the US Government (USG) was severely limited by legislation in its capacity to financially support participation in a world’s fair. The Government of Japan reiterated its invitation. Some two years after initially having declined, with the support of Ambassador Howard Baker the President gave his commitment to Prime Minister Koizumi on the occasion of a visit to Japan on October 17, 2003, that the US would “be present” at the 2005 World Exposition in Aichi, Japan.

Several months later, on February 13, 2004, the State Department issued an RFP inviting private US individuals, firms, associations and organizations (for profit and non-profit) to compete to create the US presence for Aichi 2005. The winning organization would have the authority to raise money for and develop and manage a US pavilion/exhibition covering 15,000 square feet. The Department indicated it would provide a letter authorizing it to proceed, on behalf of the USG raising the funds necessary to complete the project – then estimated at $20 million. I was named the Project Coordinator in the RFP and continued in that capacity throughout the endeavor.

A group incorporated as Aichi USA 2005 World Exposition, Inc. went through the RFP process and was selected after an expert panel was called to review its proposal. Following that review, a Letter of Intent was sent (at the end of March 2004) along with a list of conditions to meet before a Memorandum of Agreement could be signed. I put together the list of conditions based in part on comments of the review panel. On July 29, 2004, the US Department of State signed the Memorandum of Agreement officially tasking Aichi USA 2005 with raising all the funds necessary for the project and designing, building and operating the official US Pavilion.

Aichi USA 2005 raised more money ($32 million) and built a larger pavilion (22,230 square feet) than had been anticipated in the original RFP, enlisting 19 state partners and 56 corporate sponsors. Aichi USA 2005 was headed up by auto industry executive Douglas M. West. At the time, West was senior vice president of government affairs at Toyota Motor North America. More than half of the funding for the US Pavilion came from Toyota suppliers, including Coach, Rolls Royce, Dupont, and others (full list below).

Some eight-and-a-half breathless months later, on March 25, 2005, the expo’s opening day, the US Pavilion opened its doors to visitors.

The US Commissioner General was Lisa Gable, the first woman to hold that position in the history of US participation in world’s fairs. President Bush accorded her the personal rank of Ambassador for the duration of the expo.

The 22,230 square foot US exhibit was housed in a building provided by the organizers. The exhibits were produced by BRC Imagination Arts. Holloman Architects designed the building façade, a stylized rendition of the American flag featuring a 12-foot by 33-foot screen presenting America’s people, land, and culture. This was the first application of an outdoor large screen video on a US Pavilion.

The US Pavilion honored American statesman, diplomat, entrepreneur, and innovator Benjamin Franklin to showcase American culture, values, and technological achievements. Visitors followed an illuminated string of Franklin’s red kite (the kite motif evoked the famous story of his flying a kite in a storm to investigate the conduction of electricity)  into “The Franklin Spirit,” a multimedia presentation which featured a virtual Franklin, returned to celebrate his 300th birthday and provide a uniquely American perspective on the “Nature’s Wisdom” theme of the expo.

Visitors next entered the American Journey gallery, which featured exhibits of American innovation from the past, present, and future. These exhibits included:

— A 27 foot high display area where visitors could view same-day images of Saturn and its rings, received from NASA’s Cassini-Huygens mission

— A futuristic concept vehicle, AUTOnomy, the first vehicle designed from the ground up around a fuel cell propulsion system manufactured by General Motors

A highlight of America’s Aichi 2005 expo participation was US National Day on June 20, a major media event that re-affirmed the bi-lateral relationship between Japan and the US. This celebration of youth gave visitors a chance to see a parade with the University of Southern California marching band, hear tenor Daniel Rodriguez sing the Star Spangled Banner, experience the Voices of Eve‚ N Angels (VOENA) children choir, and see a performance of Sesame Street Live. With the help of baseball giant Tommy Lasorda and former Texas Rangers president, Ambassador Thomas Schieffer, the day closed with events focused on baseball, a favorite American and Japanese pastime. US National Day was attended by a special delegation that had been named by President George W. Bush.

The US Pavilion also played host to business and political leaders from around the world in The Franklin Room, a VIP suite overlooking the entire pavilion floor. In the Franklin Room, the US pavilion facilitated international business and goodwill. It hosted 16 of the 19 state partners, eight of which had delegations led by governors (the number of state partners was a record that still holds). A US-Japan Innovation Summit was held focusing on mutual investment, cooperation and innovation.

There was extensive press coverage in national and local publications in the US and Japan, and total circulation was tabulated at 285,990,766 readers (media impressions) for newspapers and 65,067,186 readers for magazines, with more than 91 articles printed in Japan during opening weekend alone.

Attendance at the US Pavilion was 2,014,648‚ exceeding the initial target of 1.5M by more than 33% – and the pavilion was twice rated #1 in a survey conducted by a major television affiliate of the Asahi newspaper. Additionally, the US pavilion was honored with the Bronze Medal from the Expo Association.

US Pavilion Aichi from James Ogul on Vimeo.

National Fuel Cell Research Center in Association with the Pacific Rim Consortium on Energy, Combustion, and the Environment

Judith Rubin
Judith Rubin ([email protected]) is a leading journalist, publicist, strategist, blogger, content marketing specialist and connector in the international attractions industry. She excels at writing about all aspects of design and technical design, production and project management. Areas of special interest include AV integration and show control, lighting design and acoustics, specialty cinema, digital video and world’s fairs. Judith has ties to numerous industry organizations. From 2005-2020 she ran communications, publications and social media for the Themed Entertainment Association (TEA). In 2013, she was honored with the TEA Service Award. She was development director of IMERSA, and co-chair of the 2014 IMERSA Summit. She was publicist for the Large Format Cinema Association in the 1990s, now part of the Giant Screen Cinema Association (GSCA) and has also contributed to the publications of PLASA, IAAPA and the International Planetarium Society. Already making her mark as a magazine and book editor, Judith joined World’s Fair magazine in 1987, which introduced her to the attractions industry. Launching as a freelancer in the mid 1990s she has contributed to dozens of publications and media outlets including Funworld, Lighting&Sound America, Sound & Communications, Urban Land, The Raconteur and The Planetarian. She joined InPark in 2010. Judith earned a Bachelor of Fine Arts from Pratt Institute. She has lived in New York City and the San Francisco Bay Area, and now makes her home in Saint Louis, where she is active in the local arts and theater community.
Share
Facebook
Twitter
Linkedin
Email
Print
WhatsApp
Pinterest
ReddIt
Tumblr
Previous articleLos Angeles Zoo Partners with TE2 to Develop Virtual Docent
Next articleMuseum of Contemporary Art Chicago Brings “David Bowie is” to Young Americans