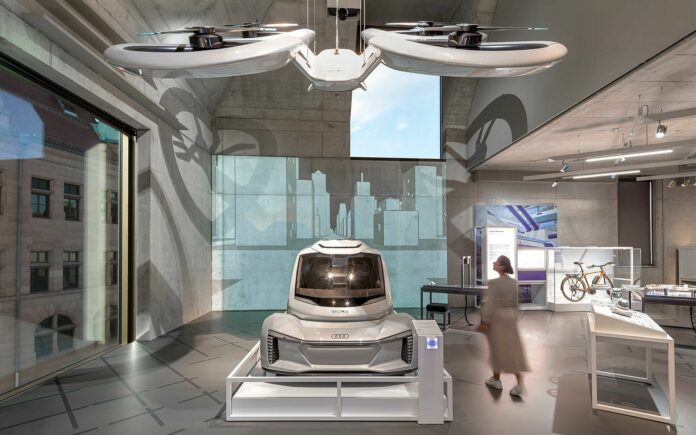 In the center of Nuremberg’s historic district, “Das Zukunftsmuseum” (The Future Museum) — an offshoot of the Deutsches Museum Munich — opened on Sept. 18. The inviting museum on the banks of the Pegnitz is located in the Augustinerhof, a new building locality created by Staab Architekten. ATELIER BRÜCKNER designed the permanent exhibition. It covers an area of 2,900 square meters (about 31,000 square feet). Generously dimensioned window openings, which illustrate the two-storeyed nature of individual parts of the museum, allow light into the new building and enable views towards the outside.

Five color-coded theme-based areas invite visitors to take a close look at what the future has in store: ‘”Work and Daily Life”, “Body and Mind”, “City System”, “Earth System” and “Space and Time”. The exhibition emphasizes the juxtaposition of science and fiction and shows how they interact with each other. They include inventions of science fiction in literature and films but also thought experiments and ideas from scientific theory.

The modular exhibition elements fit into a basic pattern, which can be envisaged as a grid on the floor. This triggers associations with a virtual 3D space that provides scope for one’s own imagination and design ideas. The three-dimensional layout that is presented has an industrial and clearly structured look. Fair-faced concrete surfaces, suspended light rails and technical connecting elements have an industrial character. All the exhibition elements follow the basic grid pattern, the matrix of the museum.

In addition to the exhibition areas on the first, second and third floors of the building, there are laboratories on the ground floor, a robot workshop and a tinkering area, called future workshop, on the first floor as well a section enabling VR time travel (project in cooperation with Cologne University) on the third floor.

The starting and end point of the tour through the museum is a spacious, two-storey forum which has steps for sitting on and is surrounded by LED strips with news tickers. Suspended centrally in the space, there is a kinetic media cube with an edge length of 3.75 meters (12 feet) that awakes curiosity and stimulates people’s interest in visiting the exhibition. The cube is fitted out with nine LED screens, each of which can independently be moved and rotated by 180 degrees. At a certain point, they all face forwards together, outward beyond the frame, and form a single screen surface that is suitable for presentations.

As a summary of the visit to the exhibition, the screens show the themes, objects and the color scheme of the exhibition areas. Evaluation of the museum game is envisaged for the presentation mode: while walking through the exhibition, the visitors collect selected exhibits with their wristband. At media stations, they can then process their selection and submit an estimate of the opportunities and risks of the new technologies.

The exhibition invites people to explore the world between science and fiction in a lighthearted manner and makes an offer to all the senses: How heavy is “light concrete”? How will our food smell in future? Are we able to discern whether our digital interlocutor is a form of AI (artificial intelligence)? Large exhibits include the prototype of a flying taxi from 2018 that visitors can experience additionally with the help of a haptic 3D model, a research capsule with powder burns that was in space in 1985 and a quantum computer from the year 2020 that has the appearance of an artwork installation. The fact that science and fiction exert an influence on each other is illustrated by the classical comparison of two exhibits: the communicator from Star Trek (1993/94) and the first folding mobile phone from Motorola, called StarTAC, from the year 1996.

Science fiction fans and visitors who are interested in technical solutions to questions about the future will not be disappointed with their visit to this museum. More than 150 informative exhibits, 90 media stations and numerous large-format film projections take them into a world of experience between science and fiction.