The Transformative Power of Despicable People 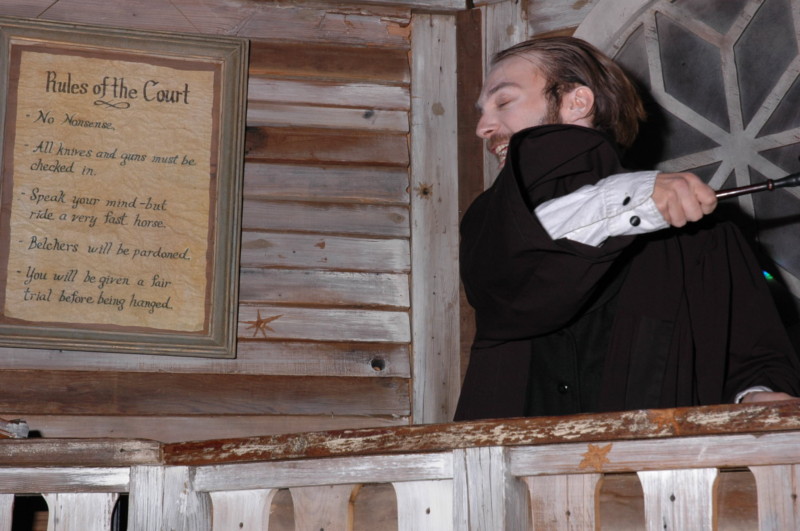 A Dungeon on Fisherman’s Wharf

In many major cities, there sits a historic area that tourists begin to flock to.  After time, the location itself becomes the tourist draw and the historical significance begins to be replaced by street performers and tacky souvenir and t-shirt shops.  In the past few decades, a reclamation effort has taken place in these areas as new businesses are brought in to not only elevate the caliber of tourist experience, but to make these historic districts more appetizing to the local populace as well.  Times Square and Hollywood Boulevard are two of the more famous districts to have undergone such transformations.

On San Francisco’s fabled Fisherman’s Wharf, the transformation began in 2005 when Boudin Bakery opened their massive Boudin at the Wharf. In profiling the recipient of the 2006 Thea Award for Outstanding Brand Experience, I showcased in the Thea Awards Program how the property succeeded in being a tourist attraction, visitor center, bakery, and local eatery.  I knew this from experience.  As residents of the city, we would often walk to Boudin to purchase bread or to sit at the second floor bar for drinks and a light supper. 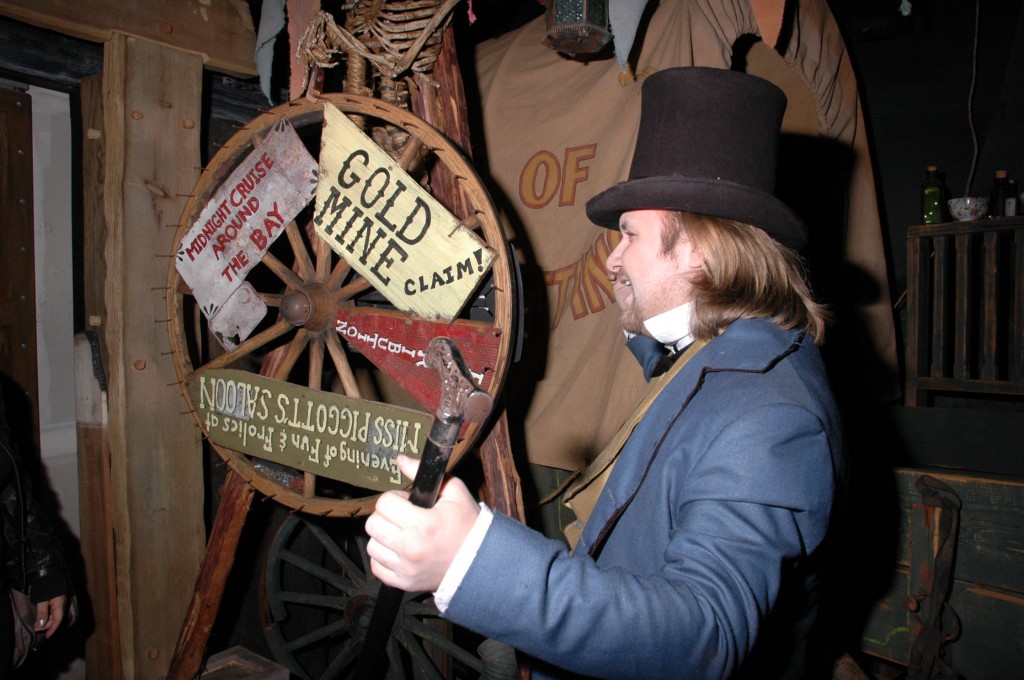 Directly across the street from Boudin, the transformation of the Wharf continues, with two new Merlin Entertainments attractions raising the bar on what the Wharf has to offer.  Unlike other attractions that have graced the area over the years – museums catering to the odd and world records, tour vehicles, and simulator rides – only a portion of the Merlin collection is interchangeable with its counterparts elsewhere. One of the Merlin attractions, Madame Tussaud’s features an entire gallery of San Francisco icons, including a wax figure of former city councilman and gay rights activist Harvey Milk that was just unveiled. 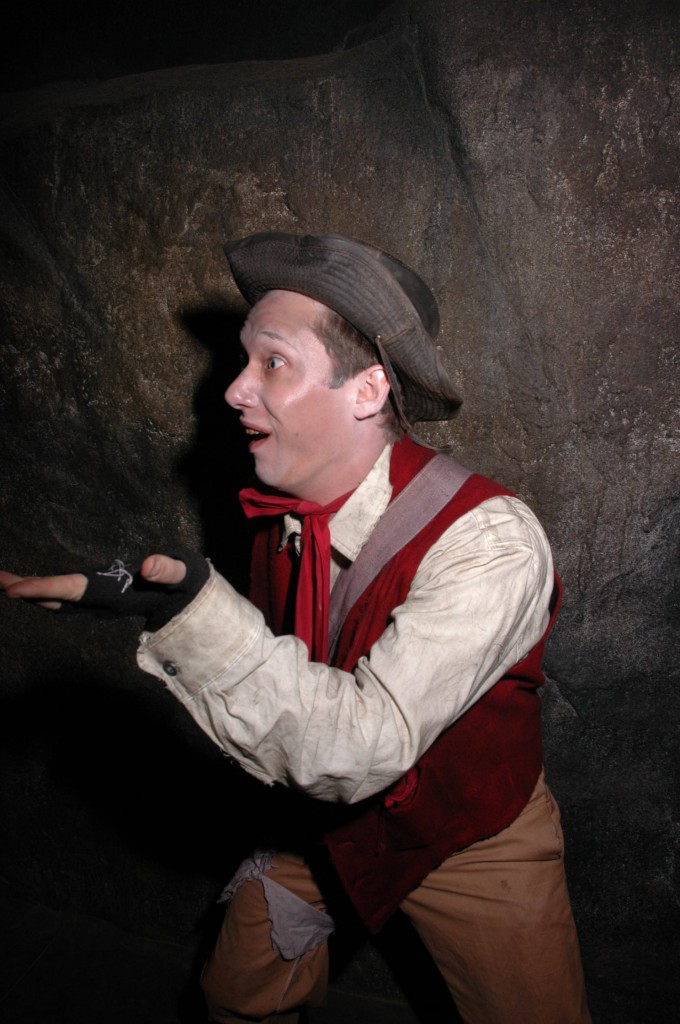 And in the basement of the building, where a non-Merlin wax museum stood for many years, the company has brought over one of its most prized European franchises – the Dungeon – with its first location in the Western Hemisphere.  The Dungeon’s tale of San Francisco history starts around 1848, in the midst of the Gold Rush and continues to 1904, when Alcatraz is set to become a Federal Prison.  It ends just before the Great Earthquake and Fire that decimated the city in 1906.  According to Artistic Director Kieron Smith, the disaster was not included because it was natural, and not caused by people.  There is another advantage to ending the tour in 1904.  The San Francisco shown in The Dungeon died with that earthquake and fire, and as a result, much of its story is shrouded in myth. 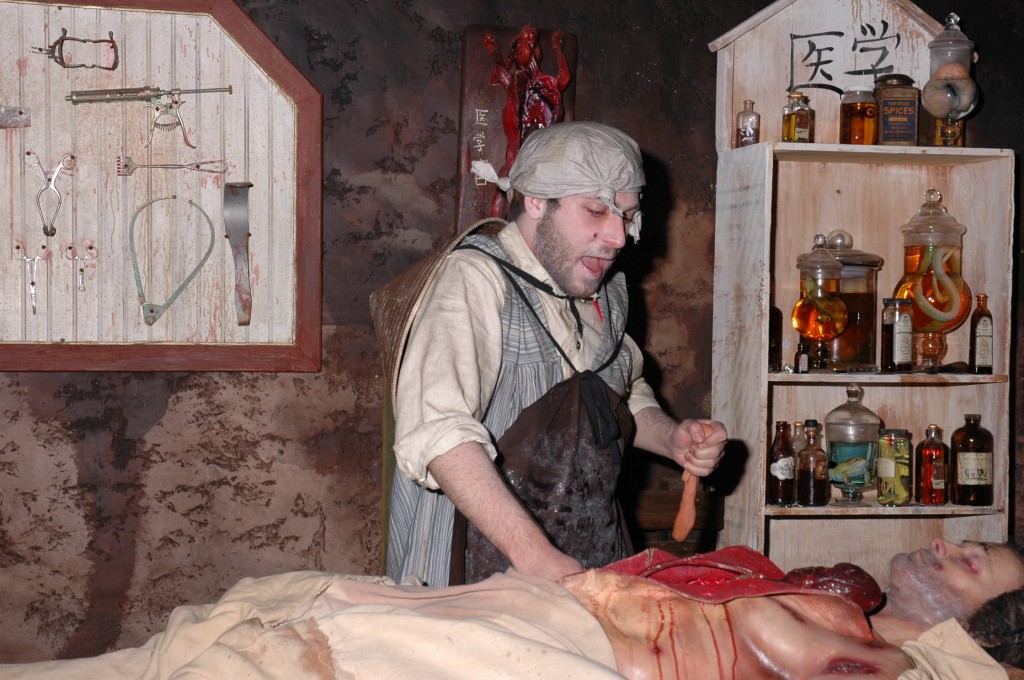 According to Smith, “Probably about a year before, we started to do the actual research and everything on which topics seemed to be the most appealing to people.  And then we narrowed it down.  We take the shows and the characters, and as a global team we now have enough Dungeons that we know what works.”

The creative team included contractors such as Nick Farmer of Farmer Attraction Development, a veteran of numerous Merlin Dungeon attractions in Europe, who worked with Merlin’s internal design team to create various gags and effects for the San Francisco location.

Authenticity is an important part of bringing the illusion to life.  Costumes were designed as close to the styles of the era as possible, taking into consideration the amount of wear over time and the fact that they had be seen in a 360 degree environment at close range. 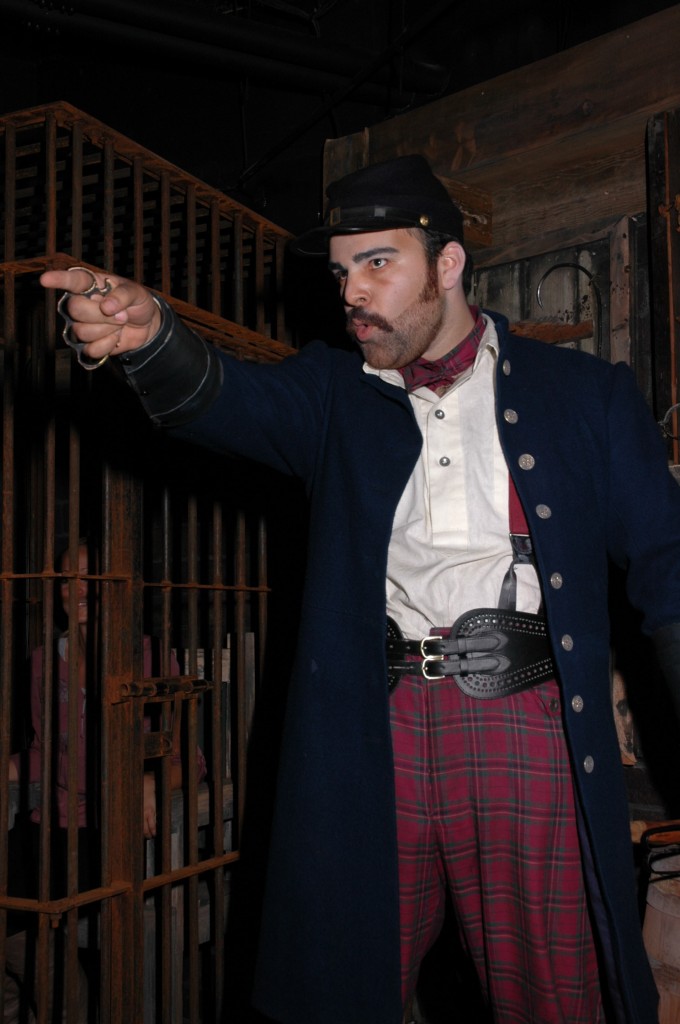 Daniels Wood Land, a California fabrication company, constructed the highly themed sets.  Instead of fabricating from Styrofoam, or fiberglass, actual materials, such as metal and concrete were used.  According to Rob and John Daniels, around half of the set materials are wood.  And all of that wood was reclaimed from Poston War Relocation Center in Arizona, an internment camp for Japanese-Americans during World War II.  The inclusion of the wood is very apropos, as the common theme of people or groups taking away individual freedom carries throughout the attraction.

The Dungeon is a history lesson, of a city long dead, told through its most despicable historical characters.  It is not a haunt, though it does feature some haunt elements.  It is a 360 degree interactive theater, designed to play with our deepest neuroses. 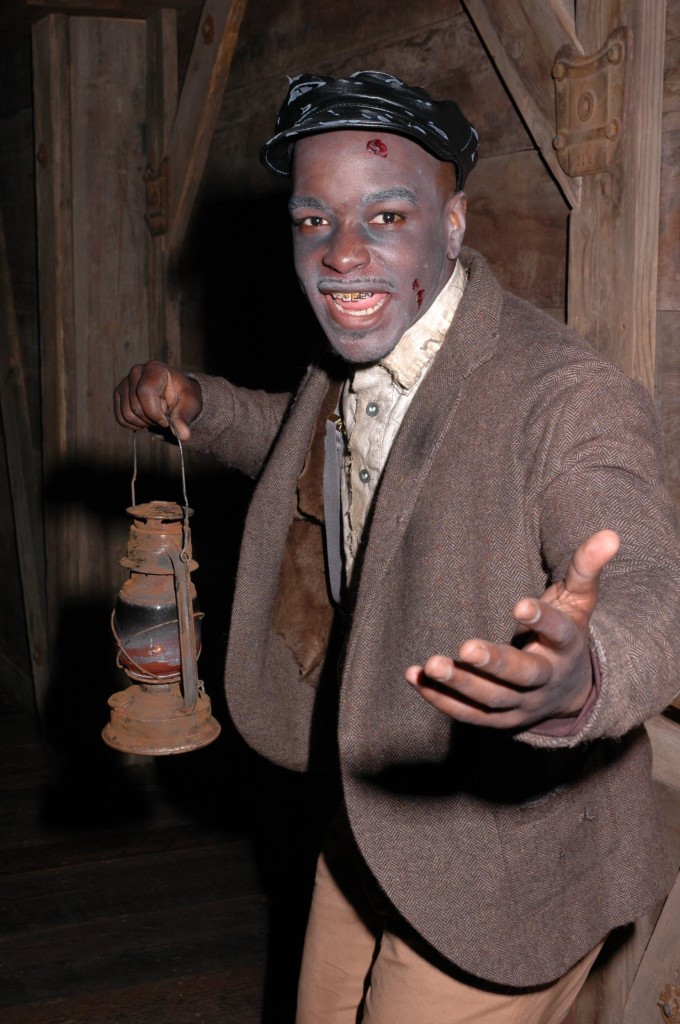 In an abridged media tour of The Dungeon, we were able to experience everything, except my favorite piece of old San Francisco history.  In the 1800’s, there was a lucrative trade of getting men drunk or drugged up in saloons to the point they became unconscious.  They would then be dropped through trap doors in the floor, spirited away to boats at the dock, and then taken to ships in the Bay to be used as slave labor as the ships headed to the orient – which is where the term “shanghaied” comes from.  By all accounts I’ve read, Miss Piggott and Shanghai Kelly were two of the better known saloon owners shanghaiing customers, but they were also competitors.

In The Dungeon’s version, guests visit Miss Piggott’s saloon and are then sold to her friend and business partner Shanghai Kelly.  They board a boat for a trip to the waiting ship (that’s correct, Merlin has installed a boat ride beneath a McDonald’s), but the plague hits and they’re returned to dock, where they encounter the plague at full force in Chinatown. 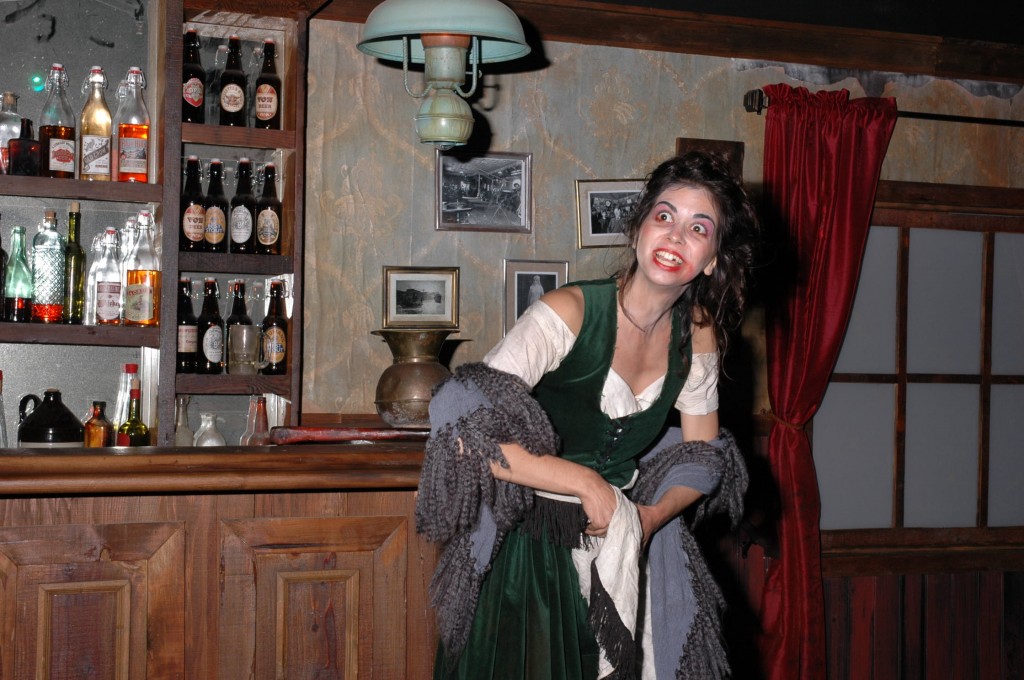 Unlike a guided tour, there is no guide in The Dungeon.  You are taken through each stage of the journey by the character who resides in that part of the story. It’s their personal story, and because you’re in close proximity to the actors, it becomes a personal journey for you as well.  Even on the boat, where you’re joined by Shanghai Kelly’s assistant.

Because actors, interacting with the guests, are behind the experience, the San Francisco Dungeon offers something unique and different on every visit.  This versatility will help draw repeat visitation from locals just as it will bring in the tourist crowd.  With each repeat visit, it’s easy to fall in love with characters, but they really are despicable people.  And it’s those despicable people who are transforming Fisherman’s Wharf’s attractions into a higher caliber experience.

All PHOTOS by Joseph Gutierrez ([email protected]) for InPark Magazine

Joe Kleimanhttp://wwww.themedreality.com
Raised in San Diego on theme parks, zoos, and IMAX films, InPark's Senior Correspondent Joe Kleiman would expand his childhood loves into two decades as a projectionist and theater director within the giant screen industry. In addition to his work in commercial and museum operations, Joe has volunteered his time to animal husbandry at leading facilities in California and Texas and has played a leading management role for a number of performing arts companies. Joe previously served as News Editor and has remained a contributing author to InPark Magazine since 2011. HIs writing has also appeared in Sound & Communications, LF Examiner, Jim Hill Media, The Planetarian, Behind the Thrills, and MiceChat His blog, ThemedReality.com takes an unconventional look at the attractions industry. Follow on twitter @ThemesRenewed Joe lives in Sacramento, California with his wife, dog, and a ghost.
Share
Facebook
Twitter
Linkedin
Email
Print
WhatsApp
Pinterest
ReddIt
Tumblr
Previous articleUS Pavilions at World Expos: Seville ’92 and Genoa ’92
Next articleElectrosonic Keeps the Memories Alive at National September 11 Memorial & Museum