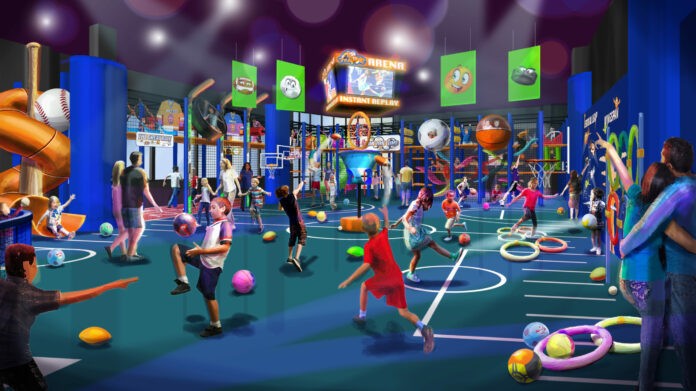 Located within the Northwest Arena, TheZone will be an interactive play space for children ages 2 through 12 as a space to climb, throw balls, jump, create their own play and play with friends. The space builds upon the Arena’s 20 years of stewardship of youth recreation and athletics.

Designed by Jack Rouse Associates and Cortina Productions, both world-renowned firms who design displays for museum, sport and entertainment venues including the National Comedy Center, TheZone will be colorful, fun and inviting, from the LED marquee that welcomes you in, to the five zones of diverse, dynamic activities inside.

The Campaign for TheZone is kicking off a $4 million dollar fundraising effort, the key part of an $8.5 million project to expand the Northwest Arena. The physical expansion was completed in May of 2021 and $700,000 has been pledged to-date toward TheZone’s fixtures and exhibits. With support from individuals, corporations, foundations and public resources, TheZone expects to be welcoming guests during summer 2022.

TheZone will become a vital community asset that offers an engaging sports-themed experience that encourages the development of physical skills and mental stimulation though indoor, year-round play time. Physical activity yields lifelong benefits, from improved cognitive function to better health into adulthood — and if children are engaged in regular activity before 12, they tend to stay engaged. Unfortunately, right now only 16% of kids in Western New York are active enough, meeting CDC recommendations for at least one hour of physical activity per day.

Lowering the financial barriers to play is a key part of the project’s purpose; kids from the lowest income bracket are seven times more likely than those from the highest to be active zero days a week (again, according to the data from State of Play Western New York.)

Disparities will be addressed through affordable admission tickets, play scholarships, sponsored free play events and partnering with clubs, agencies and providers already serving community youth and empowering them to host programming at TheZone.

Physical barriers are being lowered too; TheZone features a fully ADA-compliant design. All kids can expect to experience play in a way meaningful to them, from designing a sports uniform to testing their speed against real and simulated rivals, climbing, throwing balls, jumping and simply having fun creating their own play in an enriching, age-appropriate space.

TheZone is a prime opportunity for Jamestown. Nationwide, children’s museums add $5.5 billion to the economy annually — in part because each dollar in museum spending ripples out to create $3.66 in economic activity. Furthermore, an analysis from AECOM conservatively projects that TheZone will ultimately draw 45,000 visitors per year once well-established. This is in addition to the Northwest Arena’s 250,000 annual turnstile visits.

Six Flags Offers Thrills, Inclusivity and Safety for Everyone