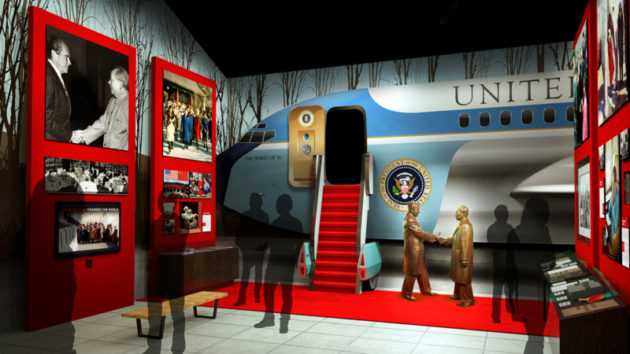 Los Angeles, CA, USA — Thinkwell Group, a global experience design and production agency specializing in the creation of cultural attractions, museum exhibits, theme parks, major attractions, and live events around the world, announced the opening of the new permanent exhibits at The Richard Nixon Presidential Library and Museum. The exhibits tell the story of the president’s life, career, ups, and downs, in an immersive and authentic exhibition.

“We are so proud and honored to have created this innovative presidential exhibition for the Richard Nixon Presidential Library and Museum,” said Joe Zenas, CEO of Thinkwell. “Working with the Richard Nixon Foundation and the National Archives and Records Administration has been a rewarding and challenging experience for the team and we are truly pleased with the results.” 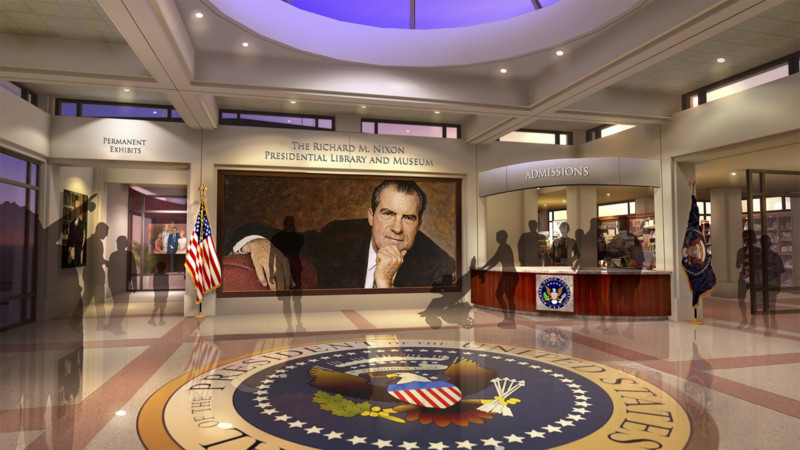 The 12,000 square foot museum exhibit covers Richard Nixon’s life: his childhood and military service, his political career spanning more than four decades, his marriage to Pat, his presidency, and his journey to advisor and elder statesman. The Watergate portion of the exhibition, completed by the National Archives and Records Administration (NARA) in 2011, received a visual update to more cohesively fit into the overall guest experience. For young visitors, establishing the complex situation the nation was in when Nixon became elected was important. Visitors start in an introductory theater, purpose built for the new museum, that establishes that context and sets the stage for the many achievements, highs, and lows the President experienced. 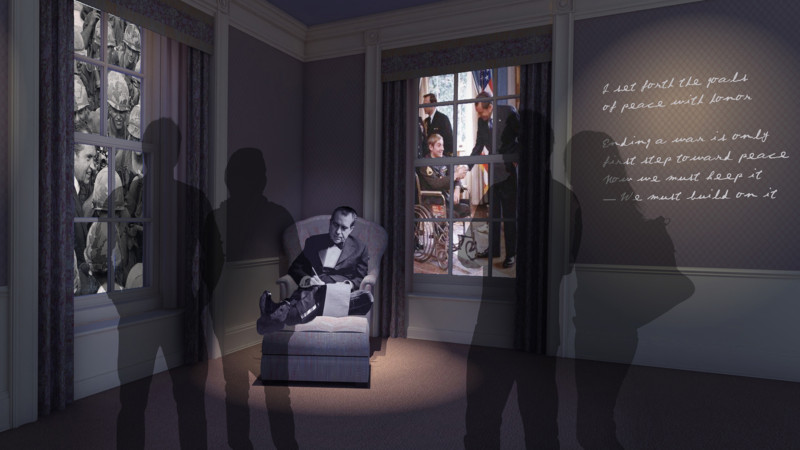 “Rather than starting with Nixon’s childhood, we put guests right into the middle of the story with the first gallery, into the midst of the turbulent 1960s,” said Kate McConnell, Thinkwell’s creative director for the project. “Between the cultural shifts, global and domestic political crises, and the Vietnam War, there was an incredible amount of turmoil facing Nixon when he stepped into office. The galleries that follow let guests explore how he chose to address those challenges, all the way through his resignation. At that turning point, visitors flash back to his childhood—in a gallery with windows looking out on his actual birth house—and follow his path through building and rebuilding a career both before and after his presidency.”

“It’s been such a pleasure to partner with the Thinkwell Group in developing new, modern, interactive exhibits that tell the full story of President Nixon’s life,” said William H. Baribault, president and CEO of the Richard Nixon Foundation. “Their creativity and attention to detail have helped create an immensely engaging experience for our visitors, who will leave President Nixon’s library and museum with a deeper understanding of his career and better equipped to come to their own conclusions about his legacy.” 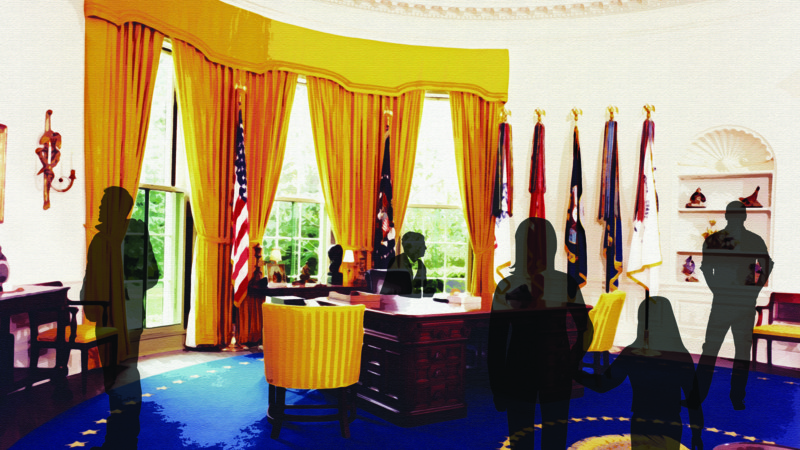 Telling President Nixon’s story involved years of planning, research, and design. Working with the RNF, NARA, historians, and other stakeholders, Thinkwell crafted the story of the exhibition, using immersive environments, interactive technologies, embedded media—and even perfectly framed photo ops suitable for social media—to make the story more involving, evocative, and even fun. In addition to designing the exhibitions, Thinkwell was the “turnkey” project partner responsible for their ultimate delivery on time and on budget. Kubik Maltbie fabricated and installed the exhibitions; Cortina Productions produced the media and interactives under Thinkwell’s creative and content guidance. Working with the Irvine Team, overall project and construction manager for the project, the museum reopened to a gala and VIP event on October 14, 2016 with an opening conversation by former Nixon administration Secretary of State Henry Kissinger.

“Our goal is to engage younger visitors in the story of President Nixon,” said Craig Hanna, Chief Creative Officer of Thinkwell. “Most know Nixon from textbooks as being embroiled in Watergate and his impeachment, but when they come to the Library they will see Nixon as more than that. They will discover an accomplished man who created the Environmental Protection Agency, opened the door to China, ended the Vietnam War, and signed the landmark Title IX into law. Throughout the exhibit they’ll find compelling media, unique interactives, and—in a compelling new addition to the Library’s experience—an authentic reproduction of the President’s Oval Office.”

Joe Kleimanhttp://wwww.themedreality.com
Raised in San Diego on theme parks, zoos, and IMAX films, Joe Kleiman would expand his childhood loves into two decades as a projectionist and theater director within the giant screen industry. In addition to his work in commercial and museum operations, Joe has volunteered his time to animal husbandry at leading facilities in California and Texas and has played a leading management role for a number of performing arts companies. Joe has been News Editor and contributing author to InPark Magazine since 2011. HIs writing has also appeared in Sound & Communications, LF Examiner, Jim Hill Media, and MiceChat. His blog, ThemedReality.com takes an unconventional look at the attractions industry. Follow on twitter @ThemesRenewed Joe lives in Sacramento, California with his fiancé, two dogs, and a ghost.
Share
Facebook
Twitter
Linkedin
Email
Print
WhatsApp
Pinterest
ReddIt
Tumblr
Previous articleKraftwerk Wins AV Award for Chimelong Ocean Kingdom’s 5D Castle Theater
Next articleFeasibility Study Shows Expo 2025 in Toronto Would Add Over $4 Billion to Canadian Economy