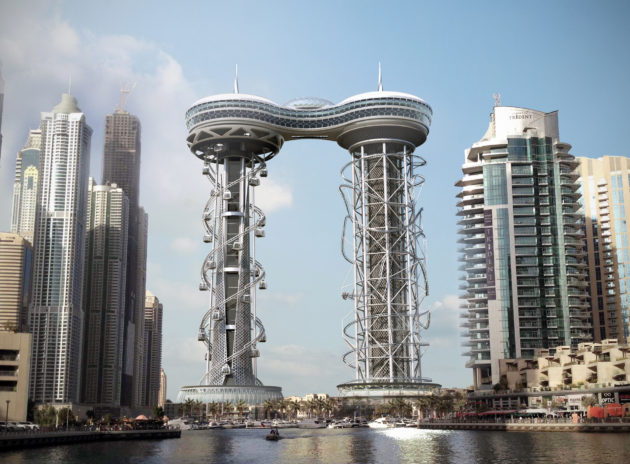 Orlando, FL, USA (JUNE 28, 2016) – ThrillCorp, Inc. (ThrillCorp), the newly-formed company of acclaimed attraction inventor Bill Kitchen and creator of the world’s tallest rollercoaster, today announces it is going public and inviting thrill-loving investors to “own the thrill” by investing in its newest creations, Polercoaster vertical thrill parks and SkySpire observation attractions. Kitchen previously created two of the most successful standalone attractions ever to go to market: the Skycoaster giant swing and iFly indoor skydiving venue, which have hosted millions of riders and generated more than $2 billion in revenue.

Kitchen’s new company, ThrillCorp, intends to repeat that success by developing, owning and operating Polercoaster and SkySpire attractions across the United States. In an innovative twist, the company plans to fund its efforts by raising up to $50 million via a new SEC rule, called Regulation A+, that allows companies to sell shares directly to investors. This is the first such effort in the attractions space and, to the company’s knowledge, currently the world’s largest Regulation A+ IPO in history.

Instead of requiring a sprawling plot of land, the Polercoaster takes the most exciting attractions of a theme park and builds them vertically, requiring only a half-acre. The Polercoaster can be configured to include a rollercoaster, drop ride, zip line, skywalk, observation deck with a truly immersive and interactive augmented reality experience and tower-top lounge, creating a highly visible, iconic structure that can reach more than 600 feet in height. “This really changes the game,” said Kitchen. “We make the best park attractions more thrilling by going taller. We put them where people can use them more frequently and at a much lower cost than a theme park. We make it a casual outing as opposed to a full day’s commitment. Guests can come out for a few hours, ride a few world-class rides and shop, dine, or just stroll. It is a new category of experience.”

SkySpire also leverages vertical building. As opposed to a rollercoaster, it creates an observation experience that is a fresh new take on the Ferris wheel. It carries guests, via spiraling gondolas, to the top of a tall tower where they can disembark on an observation level that can incorporate a lounge and/or restaurant. “In a location with a beautiful view, there is no better experience than the SkySpire,” says Kitchen. “You get unobstructed 360-degree views as you ascend and then you have a self-guided tour of the surroundings in the observation level.” The SkySpire serves as an elegant counterpoint to the raucous Polercoaster. “We think of it as a kinetic sculpture,” adds Kitchen.

ThrillCorp believes “the sky is the limit” for its new attractions. Its crowdfunded offering is intended to provide the capital to develop one or more of its thrilling projects. “We believe there are 30 to 50 viable markets in the U.S. alone,” said Michael Kitchen, the company’s Chief Development Officer. “Our goal is to quickly get one of these up and running and then have a pipeline of eight to 10 additional markets waiting in the queue.” The company can develop towers in a stand-alone tower configuration, as part of larger self-contained entertainment centers, or as larger-scale entertainment malls with multiple other attractions, dining and retail offerings. It has also begun design of all-weather solutions to extend operating seasons. “We can develop on our own or partner with local developers, municipalities and national developers. We have models that work for all situations,” said Kitchen.

The company chose Regulation A+ as a funding vehicle to engage an excited base of investors as advocates and promoters of its business. Citing the success of non-equity fundraising efforts generated through sites such as Kickstarter, ThrillCorp decided on this course of finance when Congress enacted new SEC rules that allowed sale of up to $50 million in shares directly to investors via the Internet. “We think our products have broad appeal and we like the idea of a group of shareholder supporters working with us from the ground up,” said David Gust, CEO of ThrillCorp. The company has a sizeable following. Anyone searching Google or YouTube for “Polercoaster” or “world’s tallest rollercoaster” will find videos that portray the potential guest experience. They have been featured across all major media outlets, generating hundreds of millions of views. “A very tall rollercoaster is an interesting discussion topic,” says Gust. “Will you or won’t you do it? We expect our prospective investors will view these videos and say: ‘We want to make it happen!’”

While the tall attraction is its own best marketing vehicle, the company plans to build where its targeted audiences already congregate. This strategy, enabled by the tower’s small footprint, will lower the cost of customer acquisition and increase the likelihood of steady traffic to the attractions. In many instances the attraction may generate significant new traffic, and raise real estate values for nearby properties. “Our variety of offerings in a very small footprint allow us to generate very attractive revenue per square foot compared to alternative land uses.” ThrillCorp sees its product fitting into a large number of domestic markets. “As opposed to a theme park, we have the advantages of shared infrastructure, easy customer access and the opportunity for casual guest usage. Compare our investment needs to that of a traditional theme park and then do it on a per attendee basis. We look very good.” Said Gust, “I love Disney and Six Flags and Cedar Fair, but to create another of those parks requires hundreds of millions to billions of dollars and there are few potential locations suitable to host them. In contrast, we offer several of the most popular and repeatable rides for a fraction of that cost in a way that we think customers will use more often. We can put them in most major markets. We like our model.”

Joe Kleimanhttp://wwww.themedreality.com
Raised in San Diego on theme parks, zoos, and IMAX films, InPark's Senior Correspondent Joe Kleiman would expand his childhood loves into two decades as a projectionist and theater director within the giant screen industry. In addition to his work in commercial and museum operations, Joe has volunteered his time to animal husbandry at leading facilities in California and Texas and has played a leading management role for a number of performing arts companies. Joe previously served as News Editor and has remained a contributing author to InPark Magazine since 2011. HIs writing has also appeared in Sound & Communications, LF Examiner, Jim Hill Media, The Planetarian, Behind the Thrills, and MiceChat His blog, ThemedReality.com takes an unconventional look at the attractions industry. Follow on twitter @ThemesRenewed Joe lives in Sacramento, California with his wife, dog, and a ghost.
Share
Facebook
Twitter
Linkedin
Email
Print
WhatsApp
Pinterest
ReddIt
Tumblr
Previous articleAAM announces 2016 Media and Technology MUSE Awards and Awards for Excellence in Exhibition
Next articleLeyard and Planar Receive Seven Awards at InfoComm 2016; 8K Video Wall Powered by Single 7thSense Server