Titanic Exhibits Showcase Artifacts from Ship at Cities Across America 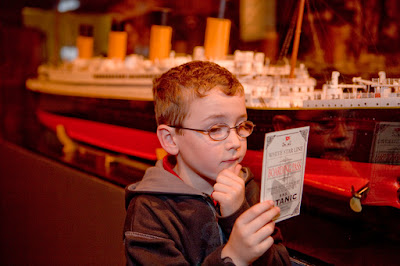 Atlanta, GA, USA /PRNewswire/ — It has been a century since the unsinkable Titanic struck an iceberg during her maiden voyage and disappeared into the icy waters of the Atlantic. As the world commemorates the 100th anniversary of Titanic’s sole voyage, people fascinated by the story of the ill-fated luxury liner can dive into her legacy through RMS Titanic, Inc.’s interactive exhibitions currently running in Las Vegas, Orlando, San Diego, Kansas City, Houston, Detroit and Atlanta.

“Each of us can relate to the passengers aboard Titanic and the retelling of her story feeds our curiosity time and again,” says Alexandra Klingelhofer, Vice President of Collections for RMS Titanic, Inc. “As we look back a century later, we realize the importance of Titanic’s legacy and remain compelled to bring people inside the story and share the mysteries that surround her sinking.”

As we reach the centennial commemoration of the maiden voyage of Titanic, RMS Titanic, Inc. is leading in the way in honoring and remembering the legendary ship. There is no more poignant way to experience Titanic 100 years later than through the authentic artifacts that have been recovered from the wreck site that can only be seen in Titanic: The Artifact Exhibition. As salvor-in-possession of Titanic, RMS Titanic, Inc., a wholly owned subsidiary of Premier Exhibitions, Inc., is the only company permitted by law to recover objects from the wreck of Titanic and its exhibitions are the only places to authentically experience this historic tragedy first hand.

With an aim to chronicle Titanic’s gripping story, RMS Titanic, Inc. has recovered more than 5,500 artifacts from the ocean floor over the course of eight separate research and recovery expeditions to the ship’s final resting place 2.5 miles below the surface.

At any of the six exhibitions, visitors will see a varied range of artifacts from everyday china service and flatware to passenger’s jewelry and personal papers; from gaming chips and currency to sections of Titanic’s hull and decorative sections from her famed Grand Staircase. RMS Titanic, Inc. is also showcasing the largest piece of the Titanic ever recovered – the ‘Big Piece’ – at Titanic: The Artifact Exhibition at Luxor Las Vegas. This 15-ton piece of Titanic’s starboard hull was raised 12,500 feet from the ocean floor and took more than 80 years, and two attempts, to surface.

The most recent expedition to the wreck site of Titanic, “Expedition 2010,” had an ultimate goal of virtually raising Titanic by using the latest state-of-the-art equipment that had never been available on previous expeditions to the wreck site. The expedition was a success and resulted in some revolutionary and fascinating never-before-seen images, video and information about the Ship and the wreck site as a whole. The information that RMS Titanic, Inc. was able to compile as a direct result of the expedition has helped answer some of the unresolved questions that still surround the sinking of Titanic and contribute to the company’s ultimate mission: to preserve the legacy of Titanic for future generations. This compelling imagery will be installed in all of our exhibitions, but debuted in Atlanta, GA, with the opening of Titanic: The Artifact Exhibition at Atlantic Station.

In addition to authentic artifacts, each exhibition offers a variety of its own unique experiences including dinner shows, actors in period costumes portraying Titanic personalities who provide guided tours, demonstrations of replica radios, detailed models of the ship and wreck site, room recreations and more.

For a full list of cities and exhibitions where individuals can view this exclusive content, visit www.rmstitanic.net.

Joe Kleimanhttp://wwww.themedreality.com
Raised in San Diego on theme parks, zoos, and IMAX films, InPark's Senior Correspondent Joe Kleiman would expand his childhood loves into two decades as a projectionist and theater director within the giant screen industry. In addition to his work in commercial and museum operations, Joe has volunteered his time to animal husbandry at leading facilities in California and Texas and has played a leading management role for a number of performing arts companies. Joe previously served as News Editor and has remained a contributing author to InPark Magazine since 2011. HIs writing has also appeared in Sound & Communications, LF Examiner, Jim Hill Media, The Planetarian, Behind the Thrills, and MiceChat His blog, ThemedReality.com takes an unconventional look at the attractions industry. Follow on twitter @ThemesRenewed Joe lives in Sacramento, California with his wife, dog, and a ghost.
Share
Facebook
Twitter
Linkedin
Email
Print
WhatsApp
Pinterest
ReddIt
Tumblr
Previous articleLake Compounce Celebrates Turning 167 By Giving The Keys to the Park to One Lucky Family
Next articleCedar Point Announces Luminosity, a New Nighttime Experience

THE HENRY FORD COMMEMORATES 100 YEARS OF TITANIC WITH ARTIFACT EXHIBITION