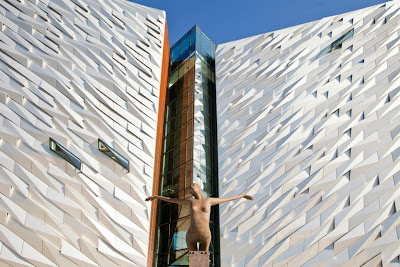 Dublin and Belfast, Northern Ireland (March 30, 2012) /PRNewswire/ — For millions of Titanic fans around the world, the city that built the most famous ship on the planet is now Europe’s new must-see destination…

In Titanic’s centenary year, on the 31 March 2012, the eyes of the world are on Belfast, Northern Ireland. The city that built the most famous ship on the planet has a story of Titanic proportions to tell.

Having completed the largest Titanic visitor attraction available anywhere around the globe, the city that designed, built and launched the legendary transatlantic liner is now ready to tell the world its Titanic story.

After three years of construction – the same time it took to build the famous ship – the eye-catching GBP97 million Titanic Belfast makes an iconic addition to the city’s skyline.

Silvery, shiny and standing proudly at the head of the very slipways down which the majestic ship first glided into the waters of Belfast Lough, the angular, aluminium-clad building is a sight to behold. 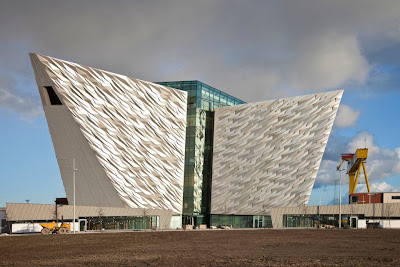 At the exact height of the original (93 feet), a walk around the star-shaped perimeter of the six-storey Titanic Belfast gives a sense of being dwarfed under the prow of a gigantic vessel and a reference also to the White Star Line, the company that owned her.

Titanic Belfast provides nine interactive galleries that tell the ship’s fascinating story from her conception in Belfast’s Harland & Wolff Shipyard, to her tragic sinking in 1912 and re-discovery led by ocean explorer Dr Robert Ballard in 1985. It also has a 1,000-seat banqueting suite that includes a replica of the Grand Staircase from the ship’s first-class section.

Visitors can take a journey through a simulated shipyard, hearing, feeling and even smelling what it was like to work on Titanic.

Included is a 20m ride in a metal elevator up the Arrol Gantry, an enormous steel structure built to facilitate the construction of Titanic and her sister ships, Olympic and Britannic.

Visitors can also experience the reality of the ship’s interiors in a ‘3D cave’ that recreates the engine rooms, third-class saloons, first-class corridors, Grand Staircase, a la carte restaurant and navigation bridge, and also a virtual ‘walk’ of the ship’s length – it contained five miles of decking.

There are full-scale reconstructions of first, second and third-class cabins, and a replica of a Titanic lifeboat that interprets the aftermath of the sinking. Voices of survivors, recorded in the 1960s, recount that horrifying night.

In the final gallery, ‘Titanic Beneath’ the visitor has unparalleled access to Dr Ballard’s high-definition footage from the wreckage. An Ocean Exploration Centre gives visitors interactive engagement with 21st-century technologies, including live links with Ballard’s exploration vessel Nautilus and marine research departments around the world.

At one of the windows in the building, which offer breathtaking views over the city and Belfast Lough, visitors see archive footage of the Titanic’s launch on 31 May 1911.

As the footage fades away, it leaves a view of the slipways that are still there today. 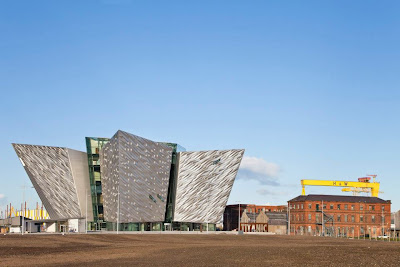 Titanic Belfast will be launched at 11.30 am on 31 March by Peter Robinson, First Minister and Martin McGuinness, Deputy First Minister of Northern Ireland.

Joe Kleimanhttp://wwww.themedreality.com
Raised in San Diego on theme parks, zoos, and IMAX films, InPark's Senior Correspondent Joe Kleiman would expand his childhood loves into two decades as a projectionist and theater director within the giant screen industry. In addition to his work in commercial and museum operations, Joe has volunteered his time to animal husbandry at leading facilities in California and Texas and has played a leading management role for a number of performing arts companies. Joe previously served as News Editor and has remained a contributing author to InPark Magazine since 2011. HIs writing has also appeared in Sound & Communications, LF Examiner, Jim Hill Media, The Planetarian, Behind the Thrills, and MiceChat His blog, ThemedReality.com takes an unconventional look at the attractions industry. Follow on twitter @ThemesRenewed Joe lives in Sacramento, California with his wife, dog, and a ghost.
Share
Facebook
Twitter
Linkedin
Email
Print
WhatsApp
Pinterest
ReddIt
Tumblr
Previous articleRaleigh Celebrates 24-Hour Opening of New Museum Wing with 24 Themed Discounts
Next articleCarowinds Opens for 2012 Season with WindSeeker