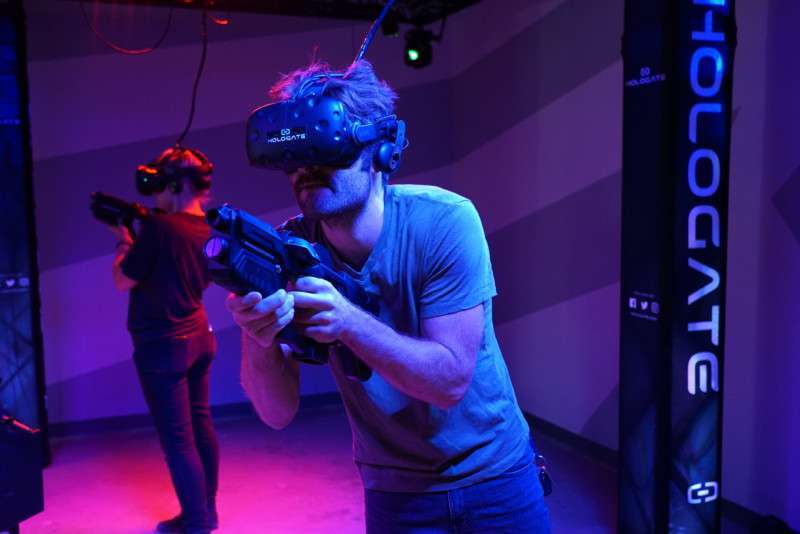 Location Based Entertainment (LBE) is making a resurgence with new venues branded to film franchises, television networks, and even sports teams. In downtown Los Angeles, the Two Bit Circus Micro-Amusement Park is a unique example of LBE that is both an homage to the great game-based facilities of the late 1990s, yet relevant to today’s patrons.

This new approach to LBE has been undertaken by Los Angeles firm Two Bit Circus, founded by Brent Bushnell (son of Atari and Chuck E Cheese founder Nolan Bushnell) and Eric Gradman. “We’re both technologists,” says Bushnell, “and both Eric and I are trained circus clowns. We wanted to take things that we’re passionate about and apply them to something new.”

The two had worked together on a number of interactive elements for promotional events over the years, including
major sporting events and corporate parties, including what Bushnell described as “a cloud that rains tequila.” Bushnell points out one of the major issues with this business strategy: “One of the things that’s a frustration is that you spend six months building for Comic-Con, and all of sudden, Comic-Con is over and on average, that stuff goes in the trash.”

To design and run the Micro-Amusement Park, Bushnell and Gradman recruited specialists in technology, film production, and attraction and hospitality. Among them is Kim Schaefer, former CEO of Great Wolf Lodge, who was appointed President of Two Bit Circus in May 2017, where she oversees the company’s LBE business (Two Bit Circus is involved in other endeavors, including a non-profit educational foundation centered around STEAM).

“I spent 17 years working in the waterpark industry,” says Schaefer. “This is a different experience for me, but it utilizes many of the same ideas. I have a general manager who came from Dave & Busters, who understands how to operate this kind of facility on a day to day basis, and we’ve really designed this place in many of the same ways we would one of the resorts – you can walk around and watch, or you can play whatever interests you – it’s up to you.”

Something old, something new

The Two Bit Circus Micro-Amusement Park pulls from the great LBE concepts of the 1990s, such as having different themed areas, each with its own unique activities (DisneyQuest); individual yet interlinked game pods (Metreon’s Airtight Garage); and an emphasis on dining and libations as part of the gaming experience (Dave & Busters, GameWorks).

Schaefer points out the importance of keeping the audience engaged. “You can be sitting at the bar and someone will come and touch you on the shoulder, inviting you on a quest.” The 40,000 square feet of space located in the Arts District of Downtown Los Angeles is guided by a number of principles, chief among them creating a sense of discovery and encouraging socialization. These are not only concepts ingrained in the staff, but they exist in the physical framework of the space as well.

Gumball machines release clues to either long or short quests, utilizing “Easter eggs” strategically hidden throughout the space. In another part of the building, a table-based video game built for six players requires them to first compete to determine what game to play before playing the game itself. “It’s great,” says Gradman, “Because it gives an opportunity for different people to meet each other – and when you’re having fun together, you’ve made a new connection.”

The Micro-Amusement Park is divided into five main components, with much of the scenic fabrication produced in a design-build process by Weber Group. The Midway provides an eclectic mix of gaming with unique controllers, such as giant track balls, alternating with classic Skee-Ball machines and unique photo experiences. The Midway is also home to Gearmo, a robot bartender, who makes different varieties of drinks. The various ingredients on his wheel included different varieties of alcohol, chocolate syrup, and Valvoline (“Robots do drink Valvoline,” Bushnell points out). Story Rooms offer three unique experiences – Two Bit Circus’ proprietary starship bridge simulator “Space Squad in Space,” “The Lost City” escape room, and Starbreeze Studios’ multi-person VR experience “The Raft,” for which Two Bit Circus holds the exclusive US license. Each activity is designed for 3-7 players.

A menagerie of VR options

The Arena is the Micro-Amusement Park’s VR area, which includes a number of different type of VR experiences. In addition to tethered units for single player gaming and a tethered four-person arena, interlinked pods are where guests can experience an updated version of Atari’s classic video game “Battlezone.” “We have the exclusive license,” says the company’s Chief Creative Officer, Nancy Bennett, a former film and television producer with an extensive background in 2D, 3D, and 360 VR creation, who became one of Two Bit’s first hires in 2012. “We took D-Box seats and at the end of the armrests, we added controllers, so you’re getting the full motion and control experience while playing.”

In addition to The Arena, VR can be found in four private cabanas, each with a single tethered VR unit and a projected image allowing the rest of the party to share in the experience, and in the full-scale Asterion VR Virtual Arcade maze, currently offering “Rabbids: The Really Big Maze” from Ubisoft and “Minotaur Maze” from Asterion VR (a compact version of the Asterion VR maze is distributed by Triotech and was showcased at the recent IAAPA Attractions Expo in Orlando). The Micro-Amusement Park is also one of the first commercial properties to feature the Birdly VR flight simulator, distributed by D3D. “We use the HTC Vive,” says Two Bit’s Head of Production, Aaron Pulka, a former Imagineer whose credits include the “Aladdin’s Magic Carpet Ride” attraction at Epcot and DisneyQuest. “We’ve found it gives a great image and we don’t need as much computing power as with other headsets.”

Virtual reality experiences only comprise around 30% of the offerings. The Arcade features new twists on traditional arcade games, and features a few classic arcade cabinets to compliment them, while Club 01 utilizes touch screens to provide a fresh spin on trivia night. Different shows are available, involving one revolving around wine tasting. “It’s boring when you go to a wine tasting and someone else is telling you what you should be tasting,” says Gradman, “Here, we quiz the audience to see what they think they’re tasting, then we can automatically tabulate and compare results on screen, making it more fun. And it gets even more fun the more you drink.”

The LA location is the first of many planned. According to Schaefer, “We’ll be able to monitor what works and what doesn’t. We have proprietary technology that allows us to track travel patterns throughout the facility through individualized RFID chips in each redemption card.” This knowledge will be used in the development of future facilities, which Schaefer visualizes in being within the 25,000 – 35,000 square foot range. The company is currently in talks with a number of leading malls and tourist destinations for new locations as it creates the next chapter in Location Based Entertainment. • • •

RELATED STORIES FROM THE PAGES OF INPARK MAGAZINE

Joe Kleimanhttp://wwww.themedreality.com
Raised in San Diego on theme parks, zoos, and IMAX films, InPark's Senior Correspondent Joe Kleiman would expand his childhood loves into two decades as a projectionist and theater director within the giant screen industry. In addition to his work in commercial and museum operations, Joe has volunteered his time to animal husbandry at leading facilities in California and Texas and has played a leading management role for a number of performing arts companies. Joe previously served as News Editor and has remained a contributing author to InPark Magazine since 2011. HIs writing has also appeared in Sound & Communications, LF Examiner, Jim Hill Media, The Planetarian, Behind the Thrills, and MiceChat His blog, ThemedReality.com takes an unconventional look at the attractions industry. Follow on twitter @ThemesRenewed Joe lives in Sacramento, California with his wife, dog, and a ghost.
Share
Facebook
Twitter
Linkedin
Email
Print
WhatsApp
Pinterest
ReddIt
Tumblr
Previous articleBazyliszek, an interactive dark ride collaboration between Jora Vision, Alterface, and ETF, to be awarded TEA Thea Award
Next articleHollandWorld Redux