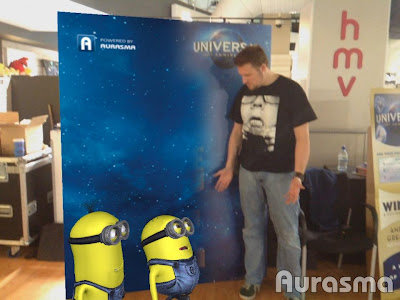 London, England /PRNewswire/ –To celebrate its 100th anniversary, Universal Pictures (UK) has unleashed an augmented collection of its most iconic movie characters in HMV’s flagship store on Oxford Street, London.

Thanks to Aurasma – the world’s leading augmented reality platform – shoppers at the central London store are taken on a unique journey, interacting with classic Universal characters in a completely new way through floor to ceiling branding, interactive point of sale and dedicated street team members. Shoppers can even have their photos taken with an augmented, life-size T-Rex and get the chance to win an iPad.

The HMV takeover kicked off on Sunday (29th April) and already more than 3,000 customers have participated in the event, many of them sharing their pictures via social networks.

The store takeover is part of a wider Aurasma-enabled campaign that includes DVD and Blu-ray covers, interactive AR experiences, famous characters being augmented onto major London landmarks and the launch of the “Universal 100” AR app.

Martina King, Managing Director at Aurasma, commented:
“Our partnership with Universal Pictures has been a fantastic collaboration spanning mobile, physical product, in store activities and TV advertising. Universal immediately understood the opportunity for the Aurasma platform to bring a new augmented dimension to their best loved characters. What we have created together is a wonderful testimony to the movie magic Universal has given us over the last 100 years and to their ability to engage audiences in completely new digital ways.”

Randel Bryan, Digital Marketing Manager at Universal Pictures UK, commented:
“Taking over HMV on Oxford Street provided us with a great opportunity to celebrate our 100th Anniversary in style, bringing the magic of our movies to the hands of our fans and giving them a truly unique and deeply engaging experience with our latest range of DVD and Blu-rays. Exciting the customer is one of our key goals and we feel that this innovative campaign has certainly delivered on that objective.”

To tie in with the celebration, a range of 15 DVD and Blu-ray titles including King Kong, Back to the Future, Mamma Mia! The Movie, The Birds and Gladiator are available in stores now, all enabled by Aurasma’s augmented reality technology.
The Universal 100 app powered by Aurasma is available to download for free from the Apple App Store and Google Play for iOS and Android devices.


ABOUT AURASMA
Aurasma is the world’s first visual browser – a new augmented reality technology that merges the physical world with the virtual. Available as a free app for newer iPhones, iPads and high-powered Android devices or as a free kernel for developers, Aurasma uses advanced image and pattern recognition to recognise and understand real-world images and objects in much the same way as the human brain does. It then seamlessly blends the real-world with rich interactive content such as videos and animations called “Auras”. Auras can be created for printed images, product packaging, clothing, physical places and users can even use the app to create and share their own. Since its launch in June 2011, Aurasma has had more than three million downloads. Over 4,000 partners in markets including retail, fashion, sport, automotive, consumer electronics, entertainment, advertising and publishing are using the free technology in their campaigns, on their products or embedding the technology in their own applications. Aurasma was developed by and is part of software company Autonomy – an HP Company.

ABOUT UNIVERSAL PICTURES
Universal Pictures is a division of Universal Studios (www.universalstudios.com). Universal Studios is part of NBCUniversal. NBCUniversal is one of the world’s leading media and entertainment companies in the development, production, and marketing of entertainment, news, and information to a global audience. NBCUniversal owns and operates a valuable portfolio of news and entertainment networks, a premier motion picture company, significant television production operations, a leading television stations group and world-renowned theme parks. Comcast Corporation owns a controlling 51% interest in NBCUniversal, with GE holding a 49% stake.

Joe Kleimanhttp://wwww.themedreality.com
Raised in San Diego on theme parks, zoos, and IMAX films, Joe Kleiman would expand his childhood loves into two decades as a projectionist and theater director within the giant screen industry. In addition to his work in commercial and museum operations, Joe has volunteered his time to animal husbandry at leading facilities in California and Texas and has played a leading management role for a number of performing arts companies. Joe has been News Editor and contributing author to InPark Magazine since 2011. HIs writing has also appeared in Sound & Communications, LF Examiner, Jim Hill Media, and MiceChat. His blog, ThemedReality.com takes an unconventional look at the attractions industry. Follow on twitter @ThemesRenewed Joe lives in Sacramento, California with his fiancé, two dogs, and a ghost.
Share
Facebook
Twitter
Linkedin
Email
Print
WhatsApp
Pinterest
ReddIt
Tumblr
Previous articleJohn Bendheim Joins Mandalay Digital Group Board
Next articleOne month until 2nd Annual China Theme Park & Resort Expansion Summit