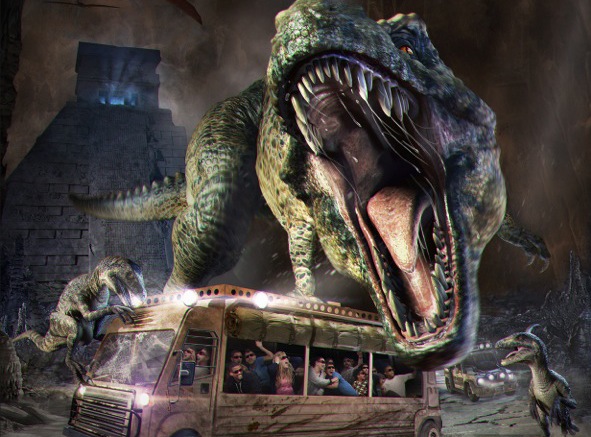 ABOVE: “The Lost Temple” promotional artwork from Movie Park Germany

In October, I moderated a roundtable discussion at the Visual Effects Society about the future of media in themed entertainment. It was exciting to see two worlds colliding: theme park designers and the creators of VFX for today’s tentpole movies. We covered a lot of different topics, but there was one common thread in each conversation: virtual reality is going to cause seismic shifts in location-based entertainment. 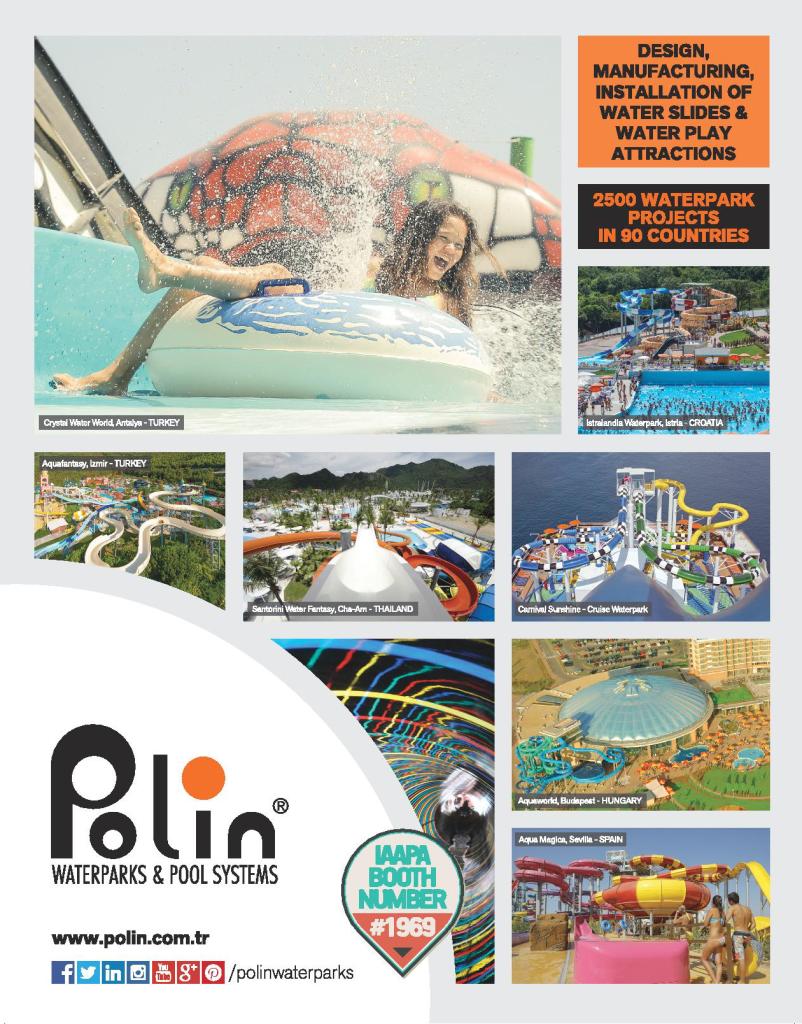 As a design tool, VR is already shaking up our world. And smallscale virtual reality attractions exist right now – there are plenty of virtual roller coasters designed for the Oculus Rift. Very soon, we could be climbing into the Iron Man suit, or jacking into our own Avatar at parks and other entertainment venues around the world. Early virtual reality theme park attractions may be limited to low-capacity, upcharge experiences, but VR could eventually create a whole new category of attractions. We may someday combine virtual reality, live digital interactivity, 4D effects, and the physical sensations of a traditional thrill ride to produce relatively inexpensive yet stunningly immersive new experiences.

While Hollywood is dipping its toe into the virtual reality pool, the themed entertainment industry is swimming in the deep end. Disney’s DISH (Digital Immersion Showroom) was a key tool in developing the Disney California Adventure park’s new Cars Land. And soon after the first Oculus Rift development kit shipped, Super 78 created Mushroom VR™, our design development application. Mushroom was integral in the production of Movie Park Germany’s The Lost Temple attraction. With this technology, we were able to streamline and expedite the attraction’s development. More importantly, this immersive review opens up the process and creates more transparency. This is essential when working with brandholders to establish that high confidence level early in the process.

In my viewpoint, this means we are no longer hamstrung by the limits of CAD drawings and 2D concept art. Experience-based attractions can now be properly “pre-experienced” rather than just pre-visualized. And by bringing down development costs,VR will help regional parks to create attractions that would otherwise be prohibitively expensive.

Beyond the concept and production phases, the opportunities for VR-based guest experiences are almost limitless. The “Augmented Thrill Ride Project” (http://vr-coaster.com) is an intriguing look down the rabbit hole. This partnership between a European university and Mack Rides synchronized a virtual flying experience with a real roller coaster. Test subjects wore an Oculus Rift headset while riding Blue Fire and Pegasus, two of Mack’s roller coasters at their Europa Park in Germany. According to the researchers, it was a huge success. The test subjects were “totally amazed,” felt no motion sickness, and were actually more comfortable riding with the virtual reality overlay than without it. Though just a first evolutionary step, it is a bold move towards enhancing VR with genuine physical sensations – a depth of immersion that will be difficult to experience outside of a theme park (safely and inexpensively) for a very long time. 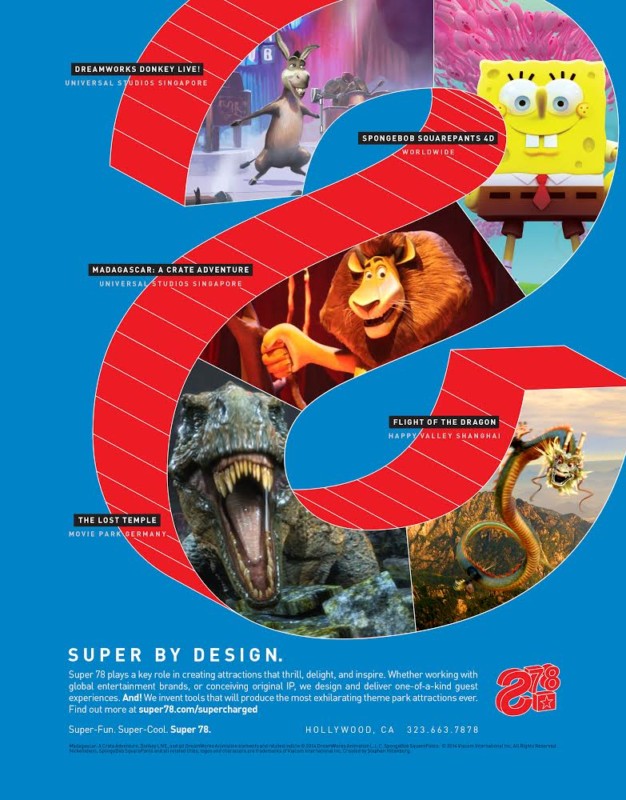 Virtual worlds can be interesting to explore, but it’s only when they are populated with virtual characters that they really come to life (especially when those virtual characters are already internationally beloved). Turtle Talk with Crush, Stitch Live!, Monsters, Inc. Laugh Floor, and Donkey Live! have proven that digital puppetry is an engaging medium that works in many different languages and cultures. This year, Super 78 is using Geppetto 2.0™ our proprietary interactive character software, to develop the world’s first stereoscopic interactive character attraction in partnership with Nickelodeon: Spongebob SubPants, scheduled to open at Moody Gardens in Galveston, TX, Spring 2015.

As ticket prices indicate, the general public will pay a significant premium for this kind of experiential entertainment, more than they will for movies, television, music, video games, etc. Comcast’s recent purchase of NBCUniversal and their aggressive commitment to their theme park resort business speaks volumes, and they are not alone. Disney, Merlin, OCT Parks, Parques Reunidos, Wanda, Genting… This new arms race is global. The demand is there. The investment dollars are there. And the technology is very close.

The theme park industry is right at the nexus of movies, video games and experiential storytelling. We are once again blazing trails in high-tech entertainment, as we always have been – I don’t think there’s ever been a more fantastic time to be working in this field. • • •

Joe Kleimanhttp://wwww.themedreality.com
Raised in San Diego on theme parks, zoos, and IMAX films, InPark's Senior Correspondent Joe Kleiman would expand his childhood loves into two decades as a projectionist and theater director within the giant screen industry. In addition to his work in commercial and museum operations, Joe has volunteered his time to animal husbandry at leading facilities in California and Texas and has played a leading management role for a number of performing arts companies. Joe previously served as News Editor and has remained a contributing author to InPark Magazine since 2011. HIs writing has also appeared in Sound & Communications, LF Examiner, Jim Hill Media, The Planetarian, Behind the Thrills, and MiceChat His blog, ThemedReality.com takes an unconventional look at the attractions industry. Follow on twitter @ThemesRenewed Joe lives in Sacramento, California with his wife, dog, and a ghost.
Share
Facebook
Twitter
Linkedin
Email
Print
WhatsApp
Pinterest
ReddIt
Tumblr
Previous articleThe Immersive Ingenuity of Attraktion!
Next articleFrom Shanghai 2010 to Yeosu 2012 to Milan 2015, creative teamwork and private funding saved the US Expo pavilion