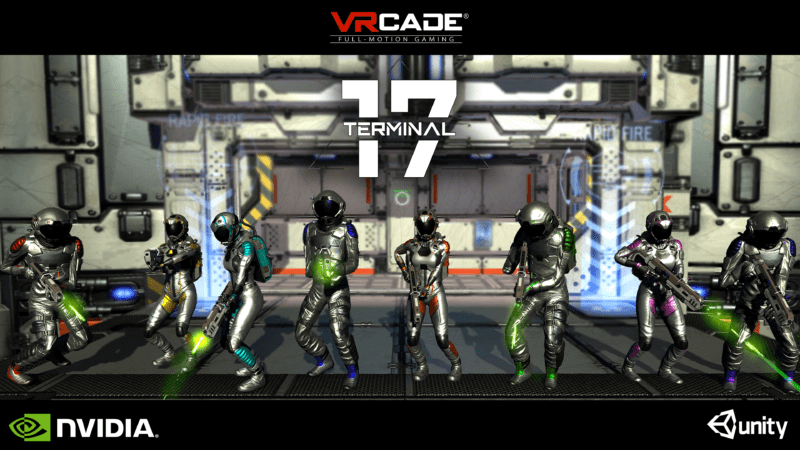 VRstudios announces the availability of a new VR attraction, Terminal 17©.  Terminal 17 is an intense, multiplayer adventure game specifically designed for the VRcade Arena. Players are part of an 8-person extermination squad tasked with finding and eliminating alien insects that are wreaking havoc on Terminal 17, a remote facility on a distant planet.

“Terminal 17 was designed from the ground up to maximize the extensive capabilities of the VRcade Arena and our Attraction Management Platform (AMP),” said Kevin Vitale, VRstudios’ CEO. “VRstudios’ is committed to using the best available tools and partnering with VR industry leaders like NVIDIA to create exciting next generation experiences.”

Leveraging the new features of Unity 2017.1 and NVIDIA’s VRWorks Unity Plugin, Terminal 17 demonstrates a milestone in visual fidelity and performance for LBE VR arena-scale content. Terminal 17 specifically takes advantage of features like Single-Pass Stereo and Lens Matched Shading (which also enables Multi-Res Shading) to give the experience a boost in performance. This improves the overall visual quality by running Terminal 17 at higher resolution with additional post-processing effects.

“VRcade Arena is a prime example of technology and fun converging to deliver a one of a kind VR experience,” said Jason Paul, general manager of gaming software and virtual reality at NVIDIA. “NVIDIA’s VRWorks plug-in for Unity proved to be a quick and simple way for VRstudios to achieve their performance goals for the experience.”

VRstudios’ latest attraction provides a unique feature-rich VR gaming experience.  Players journey through a massive virtual world by physically walking around the VRcade Arena, and using a variety of virtual transportation methods.  Players communicate with each other to cooperatively solve puzzles and advance through multiple areas of Terminal 17.

2 episodes, 15 minutes each (sequential or separate)

“Terminal 17 is the kind of high-action, epic, multiplayer game that’s only possible because of the breakthrough VRcade Arena system. Everything from the narrative, to the breathtaking visuals and immersive audio, to the player interaction combine to provide a one of a kind experience,” said Chanel Summers, VRstudios’ Vice President of Creative Development.

LBE owners and operators interested in adding leading-edge, immersive VR Attractions to their business may contact VRstudios via email at arena@vrstudios.com for more information or to schedule a demonstration. The VRcade Arena and its custom attractions will also be demonstrated at the 2017 IAAPA (International Association of Amusement Parks and Attractions) Expo in Orlando in November.