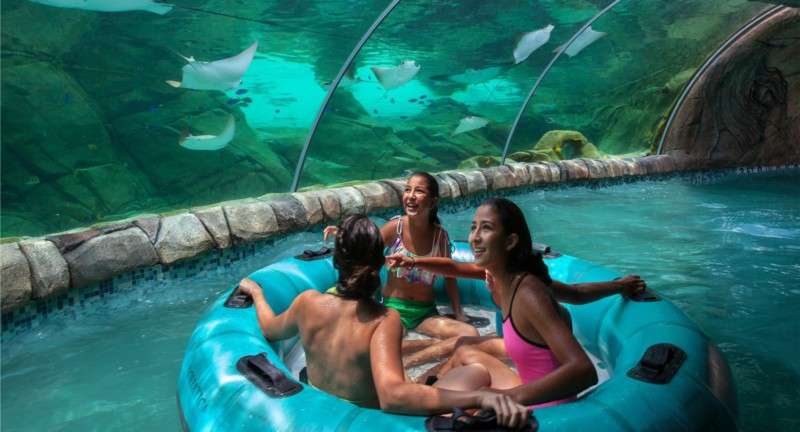 Waterpark attendance declining? It doesn’t have to be that way.

Some of the numbers for waterparks shared in this year’s Voice of the Visitor: Outlook on the Attractions Industry – a report researched and published annually by PGAV Destinations – could chill a blue raspberry slushie even on the hottest summer day. According to the report, 2017 celebrated a three-year high for waterpark guest satisfaction and how often visitors recommended a waterpark to friends and family (a.k.a. “Net Promoter Score”). However, American waterparks experienced the third straight year of falling attendance and a three-year low on an intent for repeat visitation.

Those findings are corroborated by data in the latest edition of the TEA/AECOM Theme Index, a widely cited, annual global attendance study from the Themed Entertainment Association and AECOM. The Theme Index showed that in 2017, attendance at waterparks around the world rose 1.6%, yet North American attendance dropped 2.9% (half a million guests) at the top 20 waterparks. Among other causes, the Theme Index cited a general lack of reinvestment in new attractions to bring guests coming back, as well as several severe storms – such as Hurricane Harvey – that caused parks to close for extended periods of time during peak season for safety and repairs.

In a time of declining attendance, it’s prime time to review the global trends of strategies being implemented and innovate our business approach and guest offerings to keep filling those wave pools, lazy rivers, and yes – slushies!

On the macro scale, the first trend we’re seeing is an acceleration in the merging and acquisition of parks, wherein large operators purchase flourishing or growthpotential parks and bring them under their umbrella.

Parques Reunidos, the largest waterpark operator in the world, recently acquired the second most popular waterpark in Australia, Sydney’s Wet’n’Wild. Ancol in North Jakarta recently reopened its Seaworld Aquarium, opened the Faunaland Zoo, and is developing Dufan Ocean; while in East Java, Jatim Parks recently opened its Jatim Park III, bringing its total number of attractions in the small city of Batu to 10.

This kind of portfolio expansion helps to mitigate risk. First and foremost, if the parks are spread across a diverse geographic and seasonal portfolio, either by region, country or continent, this has the potential to extend an operator’s “season” to year-round, keeping cash flow strong 12 months of the year and mitigating bad weather in one region affecting the entire company’s performance. A diversified portfolio also spreads the business and financial risk; the concerns of a single park suffering are buoyed by the strength of its peers. And finally, it offers more opportunities for guests to visit other parks; if, for instance a guest enjoyed the operator’s waterpark in Buenos Aires, they may visit the same-branded park when visiting Milan.

Beyond creating a multi-national waterpark chain, many companies are developing complimentary attractions next to existing entertainment centers to extend day visits into weekend stays – a trend that is noted in the TEA/ AECOM Theme Index. SeaWorld has been leveraging this powerful model for decades, developing its Aquatica waterparks and more resort-centric Discovery Cove and Discovery Point near its existing theme and animal parks in Orlando, San Antonio, and San Diego.

With its name emblazoned across the pitch of the World Cup, Wanda Group just completed its Qingdao Oriental Studio Indoor Waterpark, adjacent to their existing movie studio – doubling its offerings to guests. As Voice of the Visitor notes, the three most common attractions waterpark guests are likely to visit are zoo and animal
attractions, theme parks, and Family Entertainment Centers; so operators may want to consider partnering with these local institutions or developing their own.

Extending the season and the stay

Zooming in from the macro scale of destination conglomerates to the individual destination, another strategy for success is extending the season or length of stay. Many waterparks around the world are developing massive indoor components to their properties. Indoor waterparks provide numerous advantages: they get rid of the seasonality of the park by being open year-round and are virtually immune to weather extremes that take a toll on outdoor attraction visitation, such as record-setting hot days, cold, rain, or snow.

One example, as mentioned above, is Wanda’s new Qingdao Oriental Studio Indoor Waterpark. Another is Kaifeng Yinji Waterpark, which has made its first appearance on the Theme Index charts this year, having netted a significant attendance increase with the recent opening of their new indoor facility.

In colder regions such as Northern Europe, where the climate is often less than ideal for splashing around, waterparks are developing more indoor opportunities, often in the form of relaxing, water-focused spas, such as Germany’s Therme Erding. This approach works in hot climates too. Epic Waters indoor waterpark, billed as a “cruise ship on land,” just opened in spring 2018 in Grand Prairie, TX, features an 80,000-square-foot glass enclosure which is part of a much larger entertainment complex (a strategy noted above). Chimelong Water Park (Guangzhou, China) has implemented the strategy of simply extending operating hours, and has enlivened those extra minutes with a thrilling nighttime experience that leverages theatrical lighting and live concerts in their wave pool, ideal for Generation Z attendees.

Beyond just making the waterpark available more often is making it more engaging; going beyond the pools and slides to entertain, and adding immersive storytelling. An intriguing story pulls guests throughout the waterpark, encouraging them to learn and discover more, and stay longer. Just as a great TV series makes us want to spend the weekend binge-watching, an immersive waterpark story makes us want to binge-splash all weekend long. Now under construction and designed by PGAV, Chishui Dinosaur Park in China will be an immense, richlythematic waterpark that will immerse visitors in a lost world where residents cultivate dinosaur eggs and live in harmony with the thundering giants. Opening next year, Europa-Park’s new “Rulantica” waterpark takes guests on a Nordic-themed adventure through forgotten lands and myths – even its promotional video is dripping with mysterious and intriguing storytelling!

Part of this strategy of pulling guests further through the park is the increasing trend of intertwining attractions to pique curiosity. This is a tried-and-true strategy, longsuccessful in retail and grocery: there’s an intentional reason you have to walk through six aisles to reach the milk you came for in the back of the store. Waterpark guests may only be visiting to experience one or two attractions; but by tying those attractions to glimpses of additional entertainment, their intrigue deepens, they’re drawn past more points of purchase, and extend their stay.

The last strengthening trend we’re seeing is a refocus on guest comfort. A happy, comfortable guest stays longer, spends more, comes back – and brings friends and family with them. One of the most formidable challenges to guest comfort, especially on a hot day, is waiting in line. Volcano Bay introduced the innovation of the TapuTapu™ Virtual Line™ system, where guests can reserve a ride time on any attraction with the tap of their wristband. Zoombezi Bay general manager John Gannon noted that a central goal of their recent expansion with “Otter Banks” was to offer more activities to reduce “people standing in long lines.” Aside from lines, Discovery Cove just added a significant day spa this summer, overlooking peaceful waters with a variety of relaxing packages.

At PGAV, we believe that the downward attendance trends for some waterparks noted at the beginning of this article can be successfully reversed by analyzing the situation and implementing one or more of the above strategies.

A special feature of our Voice of the Visitor study is the outlook on future visitation for the coming year. We build this forecast using insights gained directly from the point of view of the visitors themselves about why they choose to visit attractions – or not to visit. For year 2018, our report forecasts a 2% attendance increase at waterparks. By monitoring and adapting these successful trends to their parks, operators could successfully achieve the forecast. Simply choose your favorite length-of-stay path. • • •

Joe Kleimanhttp://wwww.themedreality.com
Raised in San Diego on theme parks, zoos, and IMAX films, InPark's Senior Correspondent Joe Kleiman would expand his childhood loves into two decades as a projectionist and theater director within the giant screen industry. In addition to his work in commercial and museum operations, Joe has volunteered his time to animal husbandry at leading facilities in California and Texas and has played a leading management role for a number of performing arts companies. Joe previously served as News Editor and has remained a contributing author to InPark Magazine since 2011. HIs writing has also appeared in Sound & Communications, LF Examiner, Jim Hill Media, The Planetarian, Behind the Thrills, and MiceChat His blog, ThemedReality.com takes an unconventional look at the attractions industry. Follow on twitter @ThemesRenewed Joe lives in Sacramento, California with his wife, dog, and a ghost.
Share
Facebook
Twitter
Linkedin
Email
Print
WhatsApp
Pinterest
ReddIt
Tumblr
Previous article2019 Leadership Symposium for Seasonal Attractions to be hosted by Gaylord Palms
Next articleAlton Towers: Wicker Man