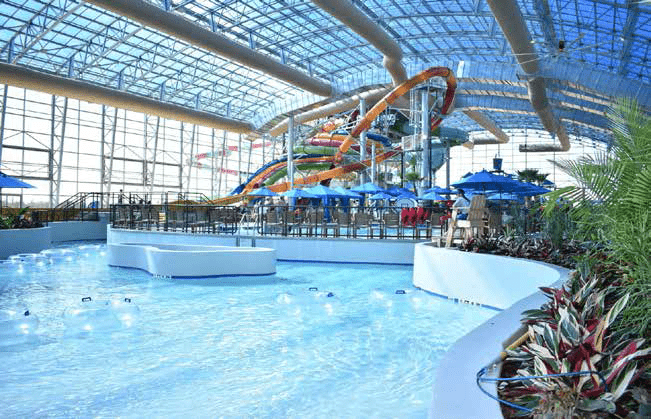 When most mayors are elected they promise better roads, more services or a cleaner city. But when Ron Jensen took office in Grand Prairie, Texas, he promised an epic waterpark – literally.

Epic Waters Indoor Waterpark is one part of a multiyear, 170-acre development that combines park space, recreation facilities, entertainment and more for residents and visitors to the Dallas-Fort Worth (DFW) suburb. To be fair, the plan had been part of the city’s master plan for years, but Jensen helped to fast-track the project.

To help pay for the development, residents voted in a 25-year 0.25% sales tax. In exchange, residents received lowered ticket and pass prices at Epic Waters as well as the site’s other facilities. Jensen turned to Rick Herold, Grand Prairie’s Director of Parks, Arts & Recreation, to help manage the project.

“During our initial research for the project we came across Jay Peak Resort in Vermont,” explains Herold. The Pump House waterpark at Jay Peak Resort is an indoor waterpark built in 2011 to supplement the activities available at the ski and mountain destination in Vermont. “We loved the concept and felt that many components of that resort were missing from the DFW metroplex.” Some of those key components they liked were the AquaLoop slide and FlowRider® from WhiteWater, a retractable roof and the French-Canadian fries-meets-cheese-and-gravy food known as poutine. The team began a feasibility study and reached out to Richard Coleman of American Resort Management (ARM), which assisted in development of the Vermont facility.

ARM served as a secondary owner’s representative during development and through opening day. They consulted on building design aspects as well as programming and engineering for the structure. One year prior to opening, they assembled a management team, assisted with creating the facility brand and started building excitement for the project in the local community. Today, ARM manages the daily operation of the facility.

“We are in awe that this municipal-built complex is really a resort-quality facility (without lodging),” says Coleman. “We frequently refer to it as a ‘cruise ship on land’.” That description largely has to do with the long, narrow shape of the building and the striking glass walls that cover and encompass three of the four facility walls. The structure includes an OpenAire retractable roof that management can use to control temperatures in the facility and bring in additional fresh air.

According to Coleman, Grand Prairie wanted to choose vendors who shared their work ethic and vision for the property. They selected Lee Lewis Construction as the general contractor, Ramaker & Associates for aquatic design and engineering, Aquatec for slide, slide tower and handrail construction, CenterEdge software for the admission and FEC systems and WhiteWater West for the slide package, FlowRider® and child’s play structure. “WhiteWater’s proposal impressed us, along with their track record for municipal projects in North America,” says Coleman. 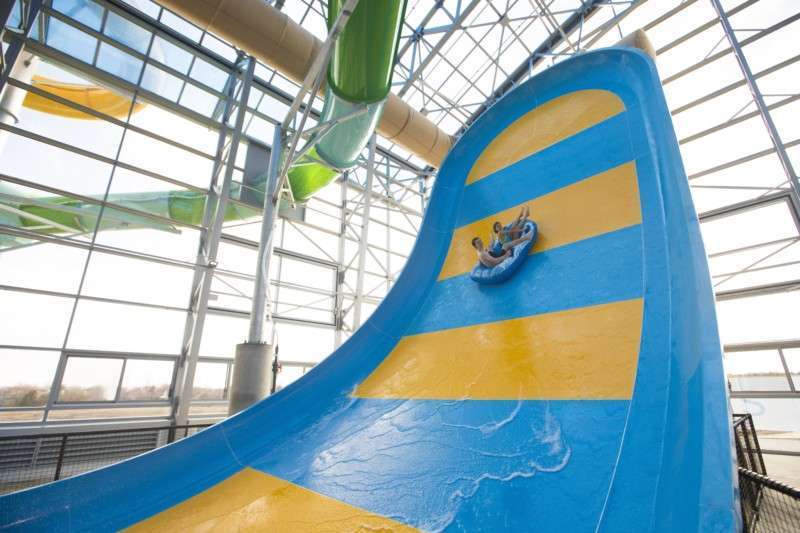 “We wanted to challenge everyone on this project to think more epic,” explains Herold. “We challenged WhiteWater to develop a single tower of slides, and the ride package they put together is unlike anything they’ve ever done.”

“We were also concerned because we are not the only waterpark around,” says Coleman. “We had to ensure that we had an attraction package that would entertain everyone. We call it ‘mild to wild.’”

Similarly, when the construction teams were impacted by what Rick Herold calls “terrible soil” they addressed the challenge by building more support piers into the foundation.

“The City of Grand Prairie asked us to help create a special environment and an extraordinary guest experience that hit all the different age groups the city wanted to attract,” says Steve Brinkel, president of WhiteWater’s parks and recreation division. “They wanted to inspire guests to come to the waterpark and to keep coming back.” According to Brinkel, the real challenge was to put together a package that included everything the city wanted while fitting into the indoor waterpark envelope.

The park’s central feature is a slide tower that extends above the main roof line and is home to nine slides, all provided by WhiteWater. Four of those are body mat racers (e-Racers). There are two traditional body slides, one enclosed that circles around outside the building (Texas Twist) and a steep drop slide from the tower’s highest point (Prairie Plunge). Next to it is the LassoLoop, an AquaLoop slide which, according to Brinkel, is the tallest indoor AquaLoop in the United States.

The tower also features two additional industry-first slides for WhiteWater. Yellowjacket Drop is the first fusion inner tube slide that combines the Boomerango slide with a Constrictor element. The Constrictor is a tight-radius turn that adds speed into a twisting drop, and the Boomerango provides a moment of weightlessness as the raft goes up and then back down a giant, angled wall.

The Aquanaut raft slide incorporates two AquaSphere elements and is North America’s very first 2-person inner tube AquaSphere. As a raft enters each sphere it slides back and forth before exiting out one end, although riders often are spun around and continue through the course backwards.

Each slide provides a distinct experience, packing a lot of variety into the compact tower. The raft slides empty out into the 650-ft lazy river that encircles most of the park. A wave machine generates waves that pulse through the river periodically and lap up on the zero-depth entry access. The center of the park features an activity pool, with basketball nets and other games. Across from that is the Rascal’s Round-Up AquaPlay structure with three kids’ slides, a dumping bucket and dozens of other waterplay interactives.

The FlowRider® Double surfing wave attraction is a double-wide model, which allows for larger surfing moves
on slower attendance days and can be divided in half for better throughput when needed.

Ample seating is located around the park, which has its own quick-service restaurant and bar. A retail space sells park-specific sundries as well as toys and other branded merchandise. A 4,000 sq-foot arcade adjoins the shop, and features the latest in video games. A second level overlooking the park holds three party rooms that can be divided or combined to fit nearly any size group. 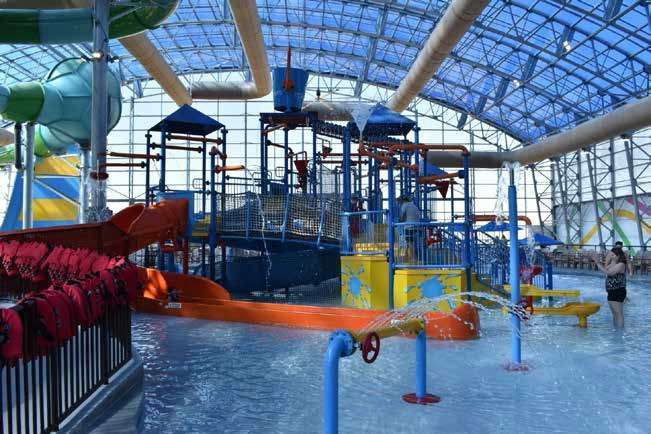 Epic Waters is part of the larger EpicCentral development in Grand Prairie. The facility joins The Summit, an older adults’ recreation center, and will soon be joined by The Epic, a 120,000 sq-foot indoor lifestyle and recreation center, expected to open later this year. Finally, PlayGrand Adventures, an accessible outdoor playground designed for people of all abilities, is planned shortly thereafter. City leaders also hope for additional developments on the property such as a hotel, restaurants and a conference center. EpicX, not yet funded by the city, has the goal to bring more adventurous options to the site including zip lines and other outdoor activities.

Epic Waters itself is already expanding. Construction is underway on a 10,000 sq-foot outdoor wave pool, with wave generating equipment provided by WhiteWater. Plans include extending the roof over that part of the park in the future with room available for additional expansion outside the park for more slides and attractions.

“Our plan is to add a new attraction every other year,” says Coleman. The park has deliberately capped its daily capacity at a strategically lower level in order to create a better experience for guests. As the park matures and more guests come, regular expansion will be necessary to accommodate the increase in visitation.

According to the park’s general manager Michael Hays, the park can be run with 30 lifeguards per day and six concessions staff. Epic Waters currently employs 225 staff altogether and is expected to hire more for the summer. About 20% are full-time.

So far, the results have been impressive. In February, Epic Waters was named to the Travel Channel’s “Eight of the Most Incredible Indoor Waterparks” lists. Within the first month, the facility had booked over 700 birthday parties and five overnight events, with bookings going out a full 12 months. About 70% of guests to the waterpark are non-residents so far. “We exceeded our attendance projections for January and February by 15-20%,” states Hays. “We expect to surpass our goal of 350,000 guests for 2018 and anticipate over half a million for 2019.”

The success reflects the focus on the end product for the consumer that the entire team worked towards. Rarely does a community coalesce around a unified vision for development, vote for a tax increase to build, and support the project to completion. Red tape, politics and personalities can often get in the way in government projects. But having that level of unity clearly resulted in a top-notch project that the citizens of Grand Prairie will be proud of for decades to come. “This is really first in the municipal market,” says Brinkel. “It is truly a waterpark resort owned by a municipality – I think that’s really special.” • • •