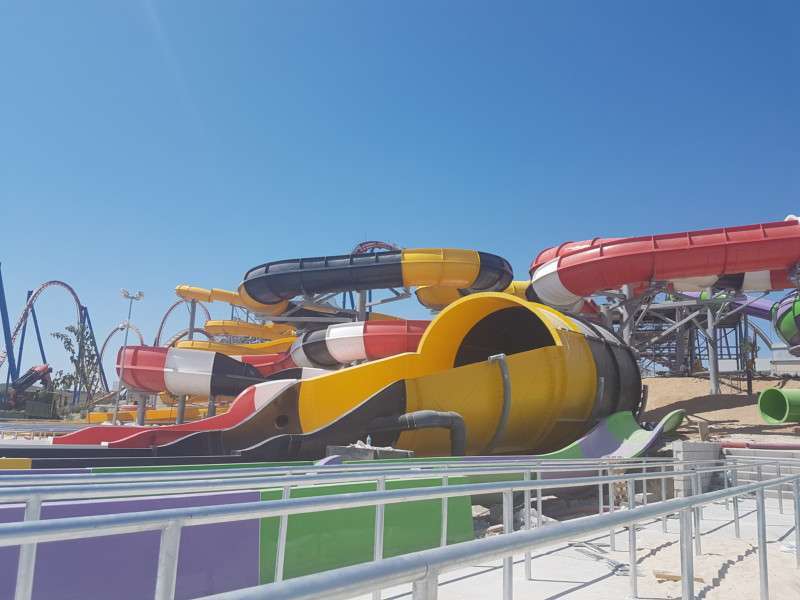 Water soothes and water invigorates. It follows that waterparks have long been a blend of relaxation and thrill, both lazy river and speed slide. This is evident among all sizes of parks and all types of water facilities. At the annual EAS and WWA conferences, we see how the industry touches everything from small gyms and pools to cutting edge cruise ships. Both vendors and operators have increasingly focused on ways to meet thrill factors while also providing calming spaces, all with an eye towards increased accessibility.

Two recent projects highlight these diverse recreation needs that water attractions serve. Parque Warner Beach, just south of Madrid, Spain, opened an expansion on their waterpark initially built in 2014, as part of the Parque Warner Madrid resort. While the 2014 waterpark featured Looney Tunes and other popular IP in its array of attractions, the 2017 expansion focuses on increased thrills with two towers’ worth of rides themed to Justice League heroes and villains.

Contrast that with the recent opening of Morgan’s Inspiration Island, a waterpark expansion of Morgan’s Wonderland in San Antonio, Texas. Both parks are dedicated to providing people of all abilities access to fun and enjoyable attractions. Both are the brainchild of Gordon Hartman, whose daughter Morgan inspired him to make accessibility a key focus of the projects. The new, $16 million waterpark features six tropical themed areas with attractions designed to delight and comfort guests who may otherwise have difficulty participating in traditional waterpark activities.

Both Parque Warner Beach and Morgan’s Inspiration Island include attractions provided by WhiteWater. Here, the company shares additional insight into the development of the projects and what makes them unique within the spectrum of water recreation.

The use of IP in waterparks has been growing in recent years and Grant Poje, WhiteWater’s Regional Vice President for Europe, Russia, and Africa considers Parque Warner Beach to be a leader in that regard. “The IP in the initial park was an effective integration of IP-based theming in a waterpark environment, and at that time it was still very new to the industry,” said Poje. “Now they are taking additional IP and applying that to thrill rides in the park.”

The Parque Warner Beach addition was a success for Parque Warner, making it an easy decision to expand. “Our Warner Beach expansion has shown steady growth since opening, and knowing that we needed to add something new to appeal to the teen demographic, this seemed like the perfect time to expand on our Super Heroes World,” said Diego Gracia, Parque Warner’s General Manager.

WhiteWater provided two slide towers, each with several attractions. The Batman-themed slide tower features The Joker, a saw-toothed Super Bowl slide that sends riders on inner tubes spinning around its purple and green bowl before churning them out the bottom. The other two slides are both four-person, family raft rides: a Harley Quinn serpentine slide with both open and enclosed sections, and a black and yellow, Batman-themed AquaSphere and Rattler fusion, which also points to the continued popularity of hybrid rides.

The second tower is home to Superman and Wonder Woman and showcases three more thrilling slides: a four-lane Mat Racer in Superman’s colors, where riders speed head first on mats as they race to the bottom, an exhilarating Flatline Loop that starts riders off by having the floor drop out from under them so they plummet near-vertical before shooting around a 360-degree loop, and a daring inner tube slide with dizzying twists and turns, giving riders the chance to feel the speed of a flying Wonder Woman.

According to Gracia, Parque Warner Beach turned to WhiteWater for their expansion because “other parks within the Parques Reunidos Group already had successful partnerships with WhiteWater and we knew that WhiteWater had the quality and price to meet the needs of our project.”

With their newest expansion, Parque Warner Beach is happy with the mix of attractions they have to offer their guests. “In my opinion we now have a great variety of attractions with the two areas, but of course, there is still enough room to continue adding new attractions in the future,” remarked Gracia.

Since its opening in June, Morgan’s Inspiration Island has been visited by guests from around the world, eager to experience the world’s first ultra-accessible splash park, designed to be inclusive of all cognitive, physical, and sensory abilities so that 100% of its guests can experience the joy of play.

The park features five custom-themed, fully-inclusive Splash Pads and an ADA accessible Water Transportation System, all from WhiteWater. The park is organized around six areas:

Rainbow Reef is a warmed-water splash pad, designed for guests of all ages that may not be able to tolerate regular water temperatures.

Calypso Cove is a music garden splash pad with a large tree with rain-curtain effects cascading from its branches.

Hang Ten Harbor, a surf-themed splash pad, features a continuous, 20-foot-diameter rain tree with a surfer and his dog catching a wave on top.

Shipwreck Island centers around an accessible pirate ship with water cannons, a double slide, and a giant dumping bucket on top.

Castaway Bay is anchored by a jungle-themed treehouse surrounded by monkeys and tropical birds, featuring a “Kids Only” water fort.

River Boat Adventure is a twisting and turning jungle journey through more than an eighth of a mile of the park and uses a redesigned water transportation system which is easily accessible for anyone in a wheelchair or with differing physical abilities.

“No detail has been too big or too small, from adding a specially-designed spiral graphic to tipping buckets (so that hearing-impaired guests will know when to wait for the downpour of water) to sourcing waterproof wheelchairs for guests,” said Paul Chutter, WhiteWater’s Chief Business Development Officer. “It’s been inspiring to see how much care and consideration the people at Morgan’s have put into this park. Their level of dedication has touched everyone involved in this project and motivated our team to meet their ingenuity and enthusiasm.”

“When you talk to the folks here at WhiteWater who have worked on Morgan’s, they all talk about how honored and fortunate they feel to be a part of something so worthy and special,” explained Chutter. “I think it’s a feeling shared by our entire organization.”

It’s not just WhiteWater that has been inspired by Morgan’s. The recently announced Playgrand Adventures will be a fully-inclusive and fun playground for all ages and abilities when it opens in the summer of 2018 in Grand Prairie, Texas. •

For more information on these projects and more, visit www.whitewaterwest.com.