Europe and the Middle East (EME) continue to develop leisure attractions, with multiple new theme parks opening in the United Arab Emirates (UAE), expansion of existing theme park destinations in Europe, and overnight accommodation options integrated into zoos and animal parks. While the largest IP-led pipeline project in Europe faces challenges, smaller scale IP and brand led attractions have found success both as independent attractions and through opportunities for licensing with leading operators such as Merlin Entertainments Group and Parques Reunidos.

The UAE continues to be the most active attraction development market in the region. Four parks opened in the second half of 2016, starting with IMG Worlds of Adventure in August and quickly followed by Dubai Parks & Resorts’ LEGOLAND Dubai, Motiongate, and Bollywood Parks between late October and mid-December. For most of these parks, this was a soft opening with some rides and park areas still in development.

This simultaneous introduction of multiple, large-scale theme parks in a single market is unprecedented and departs from the traditional development model for a multi-gate, destination theme park. The traditional model has been to start with the introduction of a single anchor theme park, and then to introduce second (and subsequent) theme park “gates” later after the destination is established and the market is educated and tested.

For example, the fastest introduction for a second gate within a Disney resort was 10 years (Paris). Universal’s Island of Adventure was introduced nine years following the opening of Universal Studios Florida. Disney’s latest resort in Shanghai opened with a single theme park gate. Even when considering all parks across multiple operators in Orlando, the world’s largest theme park market, no two large-scale parks opened in the same year from the 1971 introduction of Disney’s Magic Kingdom to the 2011 opening of LEGOLAND Florida.

This accelerated time frame is a deliberate strategy by the UAE government to aggressively add attraction supply (along with in-bound travel and hospitality capacity) to tilt the gravitational pull for global leisure travel and drive long term economic gains from this large-scale destination tourism infrastructure. With this strategy, however, the near-term risk is under-utilization of the parks while awareness within the global leisure market is still building. Already, there are signs of the challenges of building attraction supply beyond the current market demand. Attendance volume is lower than projected and there are learning curves for operators that are tackling early market and operational challenges, as well as for local resident and tourist segments that are visiting destination theme parks for the first time.

As the UAE market absorbs the current parks, it also faces the largest theme park development pipeline in the region. Warner Bros. World Abu Dhabi, a USD 1+ billion park, is expected to open next year on Yas Island, Six Flags Dubai is planned as a fourth gate at Dubai Parks & Resorts in late 2019, and IMG Worlds of Legends, a 2 million square foot expansion with IMG Worlds of Adventure, is planned for 2020. Following Dubai Expo 2020 (a six-month world’s fair), a SeaWorld park is expected in 2022. 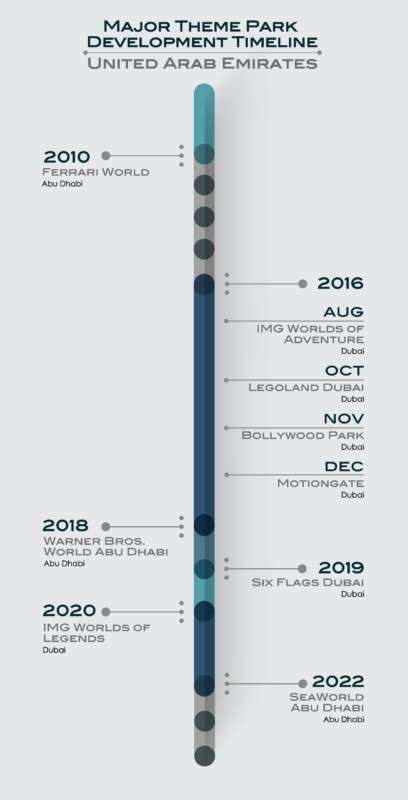 Outside of the UAE, in particular in the more mature European markets, growth is being driven through the expansion of on-site accommodation and the addition of new, large-scale second gates to existing destination resorts.

The highest profile addition is the new Ferrari Land park outside of Barcelona, Spain. This USD $100+ million project adds a third gate to the PortAventura World Resort, making it the only three-gate theme park resort in Europe. While the new park is separately ticketed with a hotel pass, it is positioned primarily as a new combination ticket option for PortAventura visitors. Looking ahead to planned projects, water parks and new hotels will be added to Europa-Park in Germany and Liseberg in Sweden. A Water Adventure Resort and new themed hotel are planned for Europa-Park in 2019 as the first phase of new development on a new 46-hectare site off the main access road. The Liseberg additions are planned for 2021, with the waterpark planned as a year-round, indoor facility.

While there are also some new parks being built in Europe, most are relatively low investment with the exception of Poland. The development of a destination theme park has long been discussed for the country and the first phase of Holiday Park Kownaty on the Poland/ Germany border is due to launch later in 2017 with the opening of Plopsa’s Mayaland. Future phases include an extreme sports park and on-site accommodation.

Sleeping with the animals

Theme parks are not the only attractions recognizing the benefits of extending their visitors’ length of stay through the addition of on-site accommodation. One sector that has been particularly successful at doing this is Zoos and Animal Parks. By building lodges into the walls of animal enclosures, these attractions are providing guests with unique opportunities to get ‘up-close’ to the animals. An early adopter of this was Zoo de la Flèche, in France, which in 2013 launched an initial test of themed safari lodges located within the zoo perimeter, with direct views into animal enclosures such as the wolves and tigers. Other zoos and animal parks have since added on-site accommodation, including the recently launched Tiger Lodge at Port Lympne, in the UK.

While the development and operating costs of these specialized hospitality units can be high compared to more standard accommodation concepts, the relatively low number of units typically developed by zoos and animal parks and the price premium which can be charged for such unique access to their animals, has made this a commercially successful format for several operators.

Challenges of mega-park development in a mature market

The most ambitious pipeline project in the EME region, the USD 4+ billion London Resort project, continues to face challenges. Earlier this year the CEO was replaced and more recently the project developers parted ways with Paramount Studios, the longtime lead IP for the studio-park project. The project still has IP agreements with the BBC and Aardman and is looking to add other IPs. The site in Kent is well located and London presents a great market opportunity with its large resident population and high tourism volume, particularly international tourism that currently exceeds 19 million visits annually.

Licensing to traditional attraction operators is no longer the only option for IPs and product brands looking for opportunities in location based entertainment. Increasingly, brands are creating their own, independent attractions and Europe is leading the industry with the introduction of branded attractions that attract large attendance.

Corporate visitor experiences have had success in Europe for some time. For example, the first LEGOLAND Park in Billund, Denmark evolved in response to visitation to the LEGO factory, and Volkswagen Autostadt in Germany created a high investment showcase for the brand.

Today, the number of IP and product brand experiences that attract over a million visitors is growing. The Warner Bros. Studio Tour London – The Making of Harry Potter, Guinness Storehouse in Dublin and the Heineken Experience in Amsterdam all have annual attendance volumes in excess of a million. The Warner Bros. Studio Tour London – The Making of Harry Potter recently expanded its offering with the addition of the Forbidden Forest and adult admission is GBP 39 (USD 50). The Guinness Storehouse has won industry awards, including Best Visitor Attraction in Europe in the World Travel Awards, and along with Heineken has demonstrated the opportunity for beverage brand experiences. The ability of both Guinness Storehouse and the Heineken Experience to grow their attendance in excess of the rate of tourist growth to their cities also shows the strength of the opportunity when a brand’s global marketing team incorporates the authenticity of their brand homes into their broader marketing campaign’s activities.

Other IP and brand owners creating their own visitor attractions include ITV plc in the UK and LEGO in Denmark. ITV plc have leveraged the popularity of their long running soap operas and the temporary Coronation Street Experience, which allowed visitors to walk on the original cobbled stones of the Street, was followed by the launch last year of The Emmerdale Studio Experience. This fall LEGO will open the new LEGO House next to the LEGO Headquarters in Billund as a corporate museum and brand showcase. The LEGO House is a high profile architectural project designed by Bjarke Ingels Group (BIG).

Along with success with independent attractions, IPs and brands have a greater range of licensing opportunities now that operators and owners are looking to create branded experiences in smaller scale formats. Merlin Entertainments, which has a large global portfolio of “Midway” attractions, has created a walk-through experience with the Shrek IP from DreamWorks and Mattel Play! experiences themed with Thomas & Friends, Bob the Builder, and other HiT Entertainment characters that have opened in both the UK and Dubai.

Parques Reunidos has also announced new mall entertainment center concepts that incorporate Nickelodeon and Lionsgate IP. The Nickelodeon concept, Nickelodeon Play Adventure, is a 3,500 to 5,000 square meter indoor concept that has projects in development in Portugal, Spain, and the UK, all expected to open in 2018.

Going forward, the region is expected to continue to see large-scale, new development in up-and-coming markets like the UAE while the mature markets will refine and diversify existing destinations and experiment and innovate in new smaller formats in retail and urban centers. • 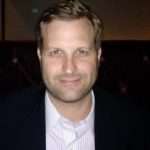 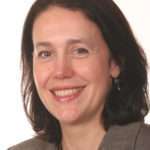 Lesley Morisetti launched Morisetti Associates in 2010 to provide economic and strategic business planning consultancy services to the attractions and entertainment industry, based on over 30 years of operational and consultancy experience. Morisetti Associates is affiliated to ECA and works with ECA on projects across Europe. Client work includes studies for Merlin Entertainments, Universal Studios, ITV plc, the National Trust, Silverstone Race Circuits, the Natural History Museums of London and Copenhagen and the Association of Leading Visitor Attractions. [email protected]

Joe Kleimanhttp://wwww.themedreality.com
Raised in San Diego on theme parks, zoos, and IMAX films, InPark's Senior Correspondent Joe Kleiman would expand his childhood loves into two decades as a projectionist and theater director within the giant screen industry. In addition to his work in commercial and museum operations, Joe has volunteered his time to animal husbandry at leading facilities in California and Texas and has played a leading management role for a number of performing arts companies. Joe previously served as News Editor and has remained a contributing author to InPark Magazine since 2011. HIs writing has also appeared in Sound & Communications, LF Examiner, Jim Hill Media, The Planetarian, Behind the Thrills, and MiceChat His blog, ThemedReality.com takes an unconventional look at the attractions industry. Follow on twitter @ThemesRenewed Joe lives in Sacramento, California with his wife, dog, and a ghost.
Share
Facebook
Twitter
Linkedin
Email
Print
WhatsApp
Pinterest
ReddIt
Tumblr
Previous article“Flying Dreams”: Eyes in the skies
Next articleWhiteWater: Thrilling slides & relaxing tides