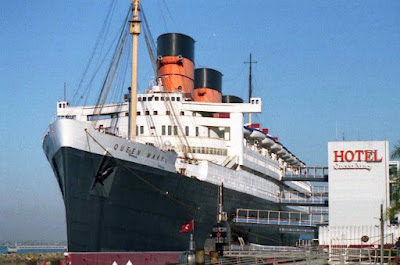 Claremore, OK, USA (May 21, 2012) /PRWEB/ — Witt Lining Systems, in conjunction with Stein Industries, has just completed a refurbishment of the two black water storage tanks aboard the historic RMS Queen Mary. Because of space limitations aboard the ship and time limitations in retrofitting the tanks, removing the tanks and replacing them with new ones was a virtual impossibility. Instead, Witt Lining Systems was contracted to build a flexible Koroseal PVC liner for each tank.

In starting the project, piping from one tank was diverted to the other to allow for clean out and installation of the first Koroseal PVC liner. The lid of the tank was removed and after the liner was installed and a new plastic tank lid was retrofitted. “Because the liner could be installed so quickly, we were in and out in two days where it would have easily been over a week to remove the tank and construct a new one in such a tight space,” said Melvin Stein, of Stein Industries, who performed the liner installation. Once the first tank was ready for service the process was repeated on the second tank. The black water storage system was then returned to its full working capacity.

The RMS Queen Mary first set sail in 1936 before being converted into a museum and hotel in 1971. The ship is permanently docked in Long Beach, CA. It is not known when these black water tanks were last replaced, if ever, but with the new Koroseal liners, many years of care free service are expected.

Stein Industries is a custom designer, fabricator, and installer of plastic tanks, custom equipment, and Witt Linings’ factory installer in industrial and commercial applications. The company is located in Bryant, IN. For more information contact 1-260-997-6700 or visit http://www.steinindustries.com.

Joe Kleimanhttp://wwww.themedreality.com
Raised in San Diego on theme parks, zoos, and IMAX films, Joe Kleiman would expand his childhood loves into two decades as a projectionist and theater director within the giant screen industry. In addition to his work in commercial and museum operations, Joe has volunteered his time to animal husbandry at leading facilities in California and Texas and has played a leading management role for a number of performing arts companies. Joe has been News Editor and contributing author to InPark Magazine since 2011. HIs writing has also appeared in Sound & Communications, LF Examiner, Jim Hill Media, and MiceChat. His blog, ThemedReality.com takes an unconventional look at the attractions industry. Follow on twitter @ThemesRenewed Joe lives in Sacramento, California with his fiancé, two dogs, and a ghost.
Share
Facebook
Twitter
Linkedin
Email
Print
WhatsApp
Pinterest
ReddIt
Tumblr
Previous articleShambhala Sets New Coaster Height Record in Europe
Next articleFifty-Story High Zipline Opening at New Mexico Ski Resort