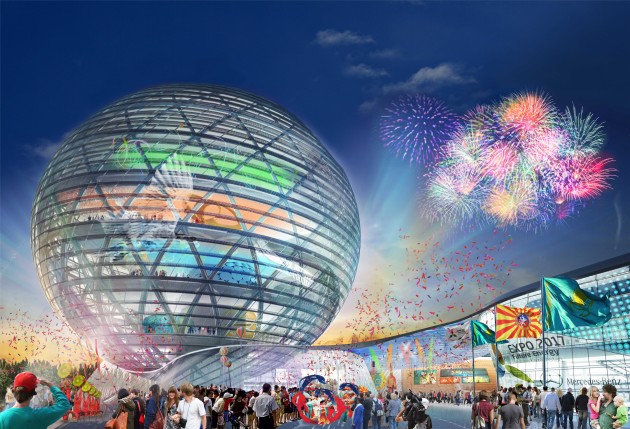 ABOVE: Rendering of Astana 2017

[quote]The nations and organizations that take part in Expo, and the millions who visit, will be able to witness the power of connections through a range of interesting, immersive and entertaining journeys.”[/quote]

[dropcap color=”#888″ type=”square”]W[/dropcap]orld’s fairs are still with us, and still relevant to a wide range of global interests in our modern age including trade, diplomacy, travel, land development and culture. Countries compete to host them, nations step up to participate in them, and visitors buy tickets and wait in lines to attend them. Milan Expo 2015 demonstrated all that. The Milan world’s fair attracted 21 million visits and 29 Heads of State. Its theme was “Feeding the Planet, Energy for Life” and the food theme turned out to be a great hit throughout the six-month event.

At this writing, in early 2016, we look forward to the next Expo, opening a little over a year from now in Astana, Kazakhstan. This time the theme is “Future Energy,” a topic that has significant impact world wide. Astana Expo 2017, officially sanctioned by the Bureau International des Expositions (BIE) will run June 10-September 17, 2017. This Expo is a three-month event as opposed to the six-month run of the Milan Expo. There are two types of world’s fairs; larger, six-month events that take place every five years (the next is Dubai Expo 2020) and smaller, three-month events scheduled in between the larger ones (the most recent was Yeosu Expo 2012 in Korea).

Astana Expo 2017 will achieve some “firsts.” It will be the first international exhibition of this kind held in a country of the former Soviet Union. It also marks the first time energy has been the theme of a world’s fair since Knoxville Expo 82 – and a lot of developments have taken place in the energy field in the past 34 years. The theme will offer Kazakhstan and the participating countries a platform to showcase energy developments in the unique, hands-on manner characteristic of world’s fairs dating all the way back to the first one (London’s Crystal Palace Exhibition of 1851).

The Astana organizers project attendance at 3 million, which is a reasonable figure for a three-month, smaller expo. So far, 76 countries have made a commitment to participate. Expo officials expect that number to grow to over 100.

In keeping with the “Future Energy” theme, the Astana site will apply best energy practices, looking to renewable sources such as solar, wind, biomass, hydropower and geothermal. The buildings themselves will be power plants that collect and use solar and wind energy and store heat underground.

After the Expo ends in September of 2017 the site will live on. Plans call for an International Centre for the development of green technologies and investment projects under the auspices of the UN. The site will also be the home of the new Astana International Financial Center, which is being developed along the lines of its counterpart in Dubai.

On November 15, 2015, the 158th general assembly of the BIE in Paris officially ratified Dubai to host the 2020 world’s fair, the next six-month world expo to follow Milan 2015. And with that, preparations in the host country officially began. Expo 2020 will run October 2020-April 2021. The year 2021 will mark the UAE’s 50th Anniversary Golden Jubilee celebrations. As Reem Al Hashemy, Minister of State and director general of the Expo 2020 Bureau, told delegates, “The clock is ticking and the countdown has begun to Dubai Expo 2020.”

And on March 13, 2016, the winning architects for the three theme pavilions of Expo 2020 Dubai were announced. Thirteen of the world’s leading architectural firms took part in a global competition, launched in July 2015. The competition sought to identify the designs for the pavilions representing Opportunity, Mobility and Sustainability, each a subtheme of the Expo’s main theme “Connecting Minds, Creating the Future.”

The firms that won the competition:

Opportunity Pavilion – BIG (Bjarke Ingels Group), a group of architects, designers, builders and thinkers based in Copenhagen and New York

Sustainability Pavilion – Grimshaw Architects, with offices in New York, London and Melbourne. After closing day, this is intended to serve as a center for innovative technologies.

Dubai’s master plan calls for the expo site to be divided into three zones, each dedicated to one of the fair’s sub-themes of Mobility, Sustainability and Opportunity. The three zones will converge at the central Al Wasl Plaza. In the Plaza, a central semicovered events space will host grand performances, spectacular displays and international pageantry day and night.

Expo 2020 Dubai will be the first world’s fair to be held in the MEASA (Middle East, Africa and South Asia) region. Organizers see the “Connecting Minds” theme as addressing the need to collaborate across cultures and regions in order to achieve sustainable solutions to global issues. 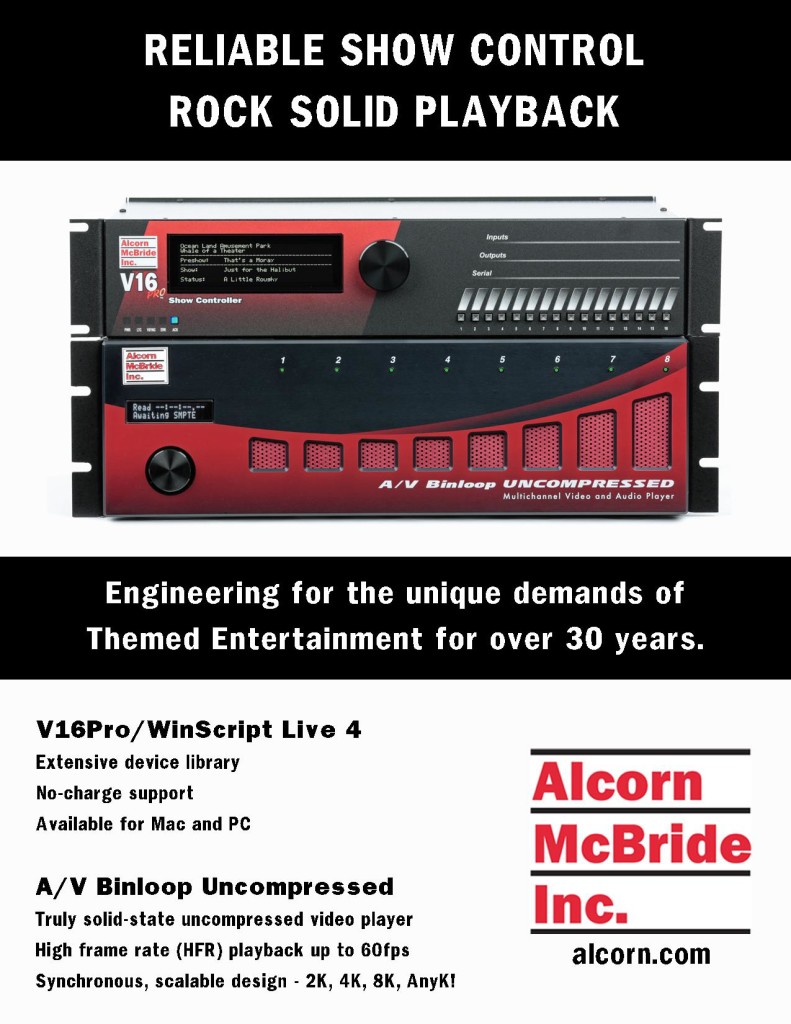 Dubai competed with other countries to gain BIE approval to host in 2020, winning a deciding vote over Yekaterinburg, Russia; Izmir, Turkey and São Paulo, Brazil. Dubai Expo 2020 will be located on a 438-hectare site of which 200 hectares (500 acres) will be devoted to a gated Expo site.

Thinkwell Group, a global experience-design and production agency has been appointed as the content master planner for the 200-hectare (500 acre) site of Expo 2020 Dubai. Craig Hanna, Chief Creative Officer of Thinkwell stated, “The nations and organizations that take part in Expo, and the millions who visit, will be able to witness the power of connections through a range of interesting, immersive and entertaining journeys. We look forward to contributing to an incredible, world-class guest experience.”

The Expo is expected to draw 25 million visits with daily visits of up to 250,000 of which 70% will be international arriving primarily at nearby Maktoum International Airport. For comparison, attendance at other World’s Fairs this century were 18 million at Hanover Expo 2000, 22 million at Aichi Expo 2005, 73 Million at Shanghai Expo 2010 and 21 Million at Milan Expo 2015.

Admission will be by ticket (price has not yet been set). By BIE regulations visitors pay no additional fees once inside the Expo site other than any retail expenditures. The area outside the Expo grounds will include residential, hospitality and logistics zones. The site will be located on the southwestern edge of the emirate, equidistant from Abu Dhabi and Dubai. It will be accessible by a new metro line being built expressly to serve the Expo.

How could the US improve its participation in world’s fairs?

Many cite restrictive budgetary language from Congress in 1994 and later in 1999 as cutting off federal funding for these endeavors. That is not true. The actual wording of the Congressional language states: “Except as provided in subsection (b) of this section and notwithstanding any other provision of law, the Department of State may not obligate or expend any funds appropriated to the Department of State for a United States pavilion or other major exhibit at any international exposition or world’s fair registered by the Bureau of International Expositions in excess of amounts expressly authorized and appropriated for such purpose.”

And so I feel strongly that if the US is to avoid continuous embarrassment, it needs to revert to Federal funding – with corporate sponsorship for perhaps special events or even product placement, but not rely on sponsorship to fund bricks-and- mortar or operations.

With Astana 2017 and Dubai 2020 coming up, let’s hope that this recent US embarrassment at Milan can be a catalyst to restructure the State Department role in US Participation in world’s fairs. Other countries are taking full advantage of world expos with their multi-million audiences as a venue for international diplomacy and so should we. • • •

Since retiring from the US State Department in 2011 after a 30+ year career in world expos, James Ogul has remained on the scene in an advisory and consulting role. He writes regularly for InPark Magazine about world’s fairs. His book, “Tales from the Expo” is free online at inparkmagazine.com.

Joe Kleimanhttp://wwww.themedreality.com
Raised in San Diego on theme parks, zoos, and IMAX films, InPark's Senior Correspondent Joe Kleiman would expand his childhood loves into two decades as a projectionist and theater director within the giant screen industry. In addition to his work in commercial and museum operations, Joe has volunteered his time to animal husbandry at leading facilities in California and Texas and has played a leading management role for a number of performing arts companies. Joe previously served as News Editor and has remained a contributing author to InPark Magazine since 2011. HIs writing has also appeared in Sound & Communications, LF Examiner, Jim Hill Media, The Planetarian, Behind the Thrills, and MiceChat His blog, ThemedReality.com takes an unconventional look at the attractions industry. Follow on twitter @ThemesRenewed Joe lives in Sacramento, California with his wife, dog, and a ghost.
Share
Facebook
Twitter
Linkedin
Email
Print
WhatsApp
Pinterest
ReddIt
Tumblr
Previous articleThe House that Ben Built
Next articleMiami’s Big Bang