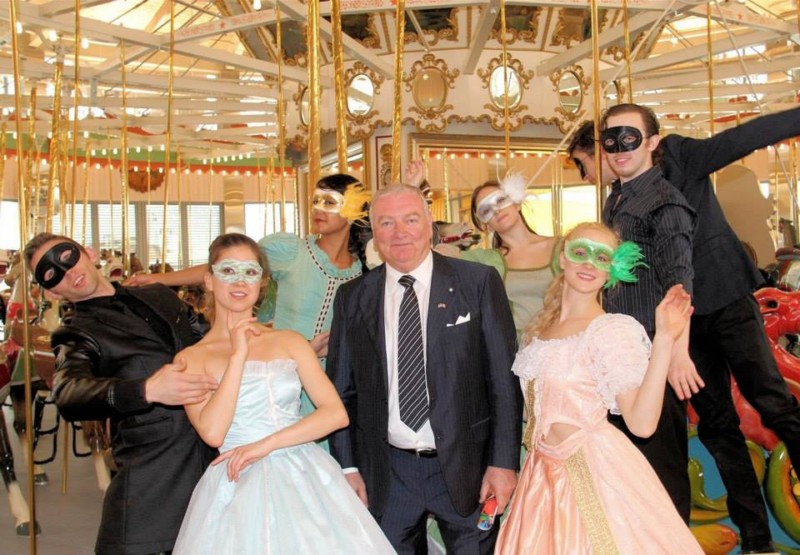 “The 80 million euro ($110 million) leisure centre ‘will not be an amusement park’ with rides only, Alberto Zamperla of Zamperla told AFP as he explained the plan to transform the artificial island of San Biagio, an old dump site, into a theme park with a cultural slant.

“Zamperla, the company behind two-thirds of the rides at Eurodisney in Paris, hopes to clean up four decades of rubbish on the four-hectare (nine acre) site at the entrance to the Giudecca Canal and transform it into a centre of fun, history and learning — if it can get the necessary authorisation.

“‘We’re talking about the history of Venice — one of my passions — but done my way,’ Zamperla said.

“‘I know what people like, I know my job. We have built theme parks in the US, Russia, Iraq, Mexico and North Korea, China and Thailand,’ he said.

“Zamperla, who among others boasts turning Germany’s Kalkar nuclear power plant into an amusement park and creating Denmark’s popular Tivoli Gardens, has teamed up with Venice’s Ca’ Foscari University Foundation for this latest project.”

Joe Kleimanhttp://wwww.themedreality.com
Raised in San Diego on theme parks, zoos, and IMAX films, InPark's Senior Correspondent Joe Kleiman would expand his childhood loves into two decades as a projectionist and theater director within the giant screen industry. In addition to his work in commercial and museum operations, Joe has volunteered his time to animal husbandry at leading facilities in California and Texas and has played a leading management role for a number of performing arts companies. Joe previously served as News Editor and has remained a contributing author to InPark Magazine since 2011. HIs writing has also appeared in Sound & Communications, LF Examiner, Jim Hill Media, The Planetarian, Behind the Thrills, and MiceChat His blog, ThemedReality.com takes an unconventional look at the attractions industry. Follow on twitter @ThemesRenewed Joe lives in Sacramento, California with his wife, dog, and a ghost.
Share
Facebook
Twitter
Linkedin
Email
Print
WhatsApp
Pinterest
ReddIt
Tumblr
Previous article
Marvel Teams with the Imagineers for Comic Book Adventures Based on Disney Attractions
Next article
Metropolitan Museum of Art Statement on Court Ruling in Admissions Fee Case

Van Gogh: The Immersive Experience returns to Naples re-imagined in the Church of San Potito