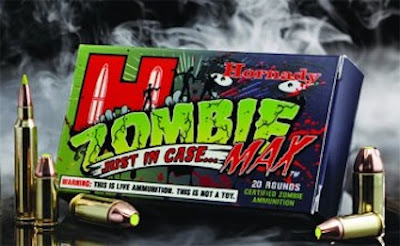 Grand Island, NE, USA (May 8, 2012) /PRWEB/ — “Zombie” hunters armed with handguns, shotguns and rifles, will head to Heartland Public Shooting Park in Grand Island, Nebraska, June 29 through July 1, 2012 for a battle against the “undead” in the “Zombies in the Heartland – Pandemic 2012” 3-gun shooting match brought to you by Hornady and the Nebraska Army National Guard.

Registration is limited to 350 entrants, and begins May 1, 2012 for the $275 “VIZ” (Very Important “Zombie” slayer) category, which includes all competitive and side match stages, one commemorative box of ammunition, a commemorative t-shirt, lunch on both days, and a bug-out bag stuffed with goods. Registration for sponsors, which will include the complete “VIZ” package, will begin on May 14th. Also beginning on May 14th will be Registration for the $165 “ZS” (“Zombie” Slayer) category that will include entry into the eight competitive stages, lunch on both days, and a bug-out-bag. Register athttp://zombiesintheheartland.com/fees-and-registration.

The event will feature eight competitive stages, and six side match stages. Event sponsors will provide many new and reactive “zombie” targets developed specifically for this match, with most targets falling over, moving, or exploding. Shooters will be required to compete with pistol, rifle and shotgun. For a complete list of rules / equipment requirements, please go to the “Zombie” Guide aka Rules and Regulations at:http://www.zombiesintheheartland.com/general-zombie-guide/

“We want competitors to enjoy a unique, surreal environment while showcasing their 3-gun skills,” said Neil Davies, Marketing Director for Hornady Manufacturing. “With a prize table of $110,000 in sponsor merchandise (and growing), Pandemic 2012 promises to attract shooters from all over the country.” For complete event information, visit http://zombiesintheheartland.com.

An optional Charity CQB Shoot House, sponsored by the Nebraska Army National Guard, will feature a maze of walls, smoke, lights and sound, and reactive “zombie” targets. Competitors will be armed with an airsoft M-4 with green laser and over 100 rounds of airsoft ammunition. Access to the Shoot House costs an additional $5, with proceeds donated to a military charity.

For further information regarding Hornady products, visit the company web site at http://hornady.com.

Joe Kleimanhttp://wwww.themedreality.com
Raised in San Diego on theme parks, zoos, and IMAX films, InPark's Senior Correspondent Joe Kleiman would expand his childhood loves into two decades as a projectionist and theater director within the giant screen industry. In addition to his work in commercial and museum operations, Joe has volunteered his time to animal husbandry at leading facilities in California and Texas and has played a leading management role for a number of performing arts companies. Joe previously served as News Editor and has remained a contributing author to InPark Magazine since 2011. HIs writing has also appeared in Sound & Communications, LF Examiner, Jim Hill Media, The Planetarian, Behind the Thrills, and MiceChat His blog, ThemedReality.com takes an unconventional look at the attractions industry. Follow on twitter @ThemesRenewed Joe lives in Sacramento, California with his wife, dog, and a ghost.
Share
Facebook
Twitter
Linkedin
Email
Print
WhatsApp
Pinterest
ReddIt
Tumblr
Previous articleCongress Going Wild with AZA Visit
Next articleK’NEX Giving Away Dinosaur Building Sets at Cedar Point’s New Attraction