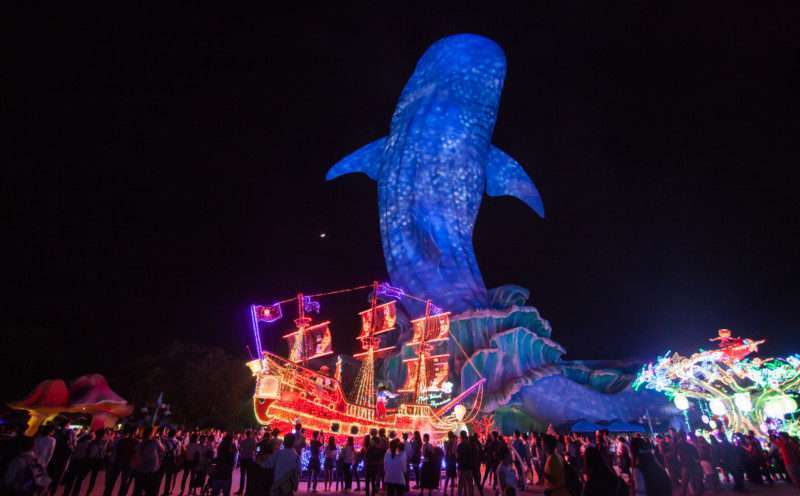 The Themed Entertainment Association (TEA) and the Economics practice at AECOM have released the 2017 TEA/AECOM Theme Index and Museum Index. This annual study shows growth and evolution in the global themed entertainment industry by charting attendance numbers and trends of the world’s top-attended theme parks, water parks and museums, plus analysis by AECOM researchers. The report studies the sector by region (The Americas, Asia-Pacific, EMEA), the global market as a whole and the top operators (Disney, Merlin, Universal, OCT, Fantawild, etc.).

“The Chinese market has responded enthusiastically to high-quality theme park offerings, as demonstrated by the success of the Chimelong parks and of Shanghai Disneyland in its first full year of operation, with Universal Beijing on the horizon,” said Chris Yoshii, Vice President, Asia-Pacific, AECOM. More details on the performance and trends in the Asia-Pacific region can be found in the report.

In the United States, theme parks and amusement parks had a good year and showed that there is still plenty of room for growth and innovation in this mature market. Disney and Universal parks performed well due to major reinvestments such as Pandora – The World of Avatar (Disney) and Volcano Bay (Universal). “Disney is leveraging the power of compelling intellectual property (IP) with Pandora — and new Star Wars lands on the horizon — as did Universal with the Harry Potter attractions, and both set a leading example for the industry,” said Brian Sands, Vice President, Americas.

The trend to develop immersive attractions based on IP is ongoing and being explored globally. Other trends seen in all regions of the increasingly global attractions industry documented by the TEA/AECOM Theme Index include continuing investment and innovation in water parks, hospitality expansion and interactive guest experiences with role playing.

In Europe, parks in France (Parc Asterix, Disneyland Paris), The Netherlands (De Efteling) and Northern Europe (Grona Lund) did particularly well, with mixed results in other regions. “Throughout Europe, we see an active and growing industry with ongoing investment and merger and acquisition activity,” said Margreet Papamichael, Director, EMIA, AECOM. Considerable theme park development continues in the United Arab Emirates. “The pipeline in this part of the world is still significant,” says Papamichael.

This is the 6th year since the study was expanded to include the Museum Index, charting the world’s top-attended museums. The 2017 report includes a deep dive into Japan’s museum sector which is one of the best performing in the world, and a look at some museums in US and Europe that did particularly well in 2017, including the National Museum of African American History and Culture in Washington D.C., and the Louvre in Paris, which returned to the top global position. “Data continues to demonstrate that year to year museum attendance is significantly affected by special exhibits and expansions,” said Linda Cheu, Vice President, Americas, AECOM.

“On the whole, 2017 reflected a return to healthy growth with significant capital expenditures in the industry, both in traditional attractions, attraction-adjacent hotels, and new, IP-branded indoor attractions,” said Robinett. “With stabilized global economies, and significant planning occurring now for future investment, prospects look good for the industry in the short- to mid-term.”

“The TEA/AECOM Theme Index provides a clear picture of the global attractions industry and its continued expansion,” said David Willrich, TEA International Board President. “This is fully consistent with TEA’s own international outreach and global growth. We value our partnership with AECOM.”

“We’re delighted to continue our longstanding collaboration with AECOM to produce the TEA/AECOM Theme Index and Museum Index every year,” said Jennie Nevin, TEA COO. “For TEA, an international membership organization serving the creators of compelling places and experiences, the Theme Index helps educate and enrich the industry, part of our mission.”

The annual TEA/AECOM Theme Index is a definitive and widely cited global resource benefiting the international attractions industry and many other sectors including financial, real estate, education, hospitality, retail, travel and tourism. It is a vital reference for the media.

TEA and AECOM have collaborated to produce and publish the Theme Index since 2006, and to make the report available free as a service to the international attractions industry. It is available in PDF format in English and Chinese language versions, on the TEA and AECOM websites, and in a limited print edition.

476 million visits to attractions run by the top 10 global theme park groups, up 8.6%

151 million visits to the top 20 amusement/theme parks in North America, up 2.3%

63 million visits to the top 20 amusement/theme parks in Europe, Middle East and Africa, up 3.4%

Joe Kleimanhttp://wwww.themedreality.com
Raised in San Diego on theme parks, zoos, and IMAX films, InPark's Senior Correspondent Joe Kleiman would expand his childhood loves into two decades as a projectionist and theater director within the giant screen industry. In addition to his work in commercial and museum operations, Joe has volunteered his time to animal husbandry at leading facilities in California and Texas and has played a leading management role for a number of performing arts companies. Joe previously served as News Editor and has remained a contributing author to InPark Magazine since 2011. HIs writing has also appeared in Sound & Communications, LF Examiner, Jim Hill Media, The Planetarian, Behind the Thrills, and MiceChat His blog, ThemedReality.com takes an unconventional look at the attractions industry. Follow on twitter @ThemesRenewed Joe lives in Sacramento, California with his wife, dog, and a ghost.
Share
Facebook
Twitter
Linkedin
Email
Print
WhatsApp
Pinterest
ReddIt
Tumblr
Previous articleMediaMation receiving award from Asian American Symphony Association
Next articleExpo 2020 Dubai’s Expo Live global social impact program provides grants to projects from 22 countries