Minnesota was one of three finalists bidding to host a World Expo in 2023 losing out to Buenos Aires. Had Minnesota’s bid prevailed, Expo 2023 would have been the first World Expo approved by the Bureau International des Exhibitions (BIE) to be held in North America in 37 years (since Vancouver Expo 86).

The group that put together Minnesota’s 2023 bid, led by Mark Ritchie, has bounced back with plans to bid for 2027, the next available date for which there is not yet any announced competition from other cities. The 2027 slot is for a specialized expo, which would be three months in duration.

Photo at top: Mark Ritchie, President and Chief Executive Officer of the Minnesota World’s Fair Bid Committee addresses representatives from the diplomatic corps at a reception in support of the United States’ bid to host the 2023 World’s Fair at the U.S. Department of State in Washington, D.C. on October 26, 2017. [State Department Photo/ Public Domain] 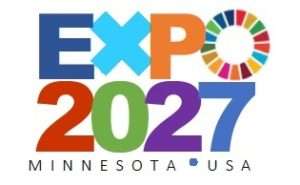 What has motivated you to bring a world’s fair to Minnesota?

Attending a world’s fair when I was 12 years old was life-changing  – an experience that I believe everyone, young and old, should have the opportunity to be part of. Minnesota is an ideal location as a global-minded, welcoming place that understands that deeper ties and long-lasting relationships with the rest of the world is the best path forward for all. As home to one of the founders of the United Nations and to a number of Nobel Peace Prize recipients Minnesotans have a tradition of promoting international cooperation through people-to-people experiences. My passion for bringing the world’s fair to Minnesota reflects my belief that there is no more powerful way of bringing people together.

What did you learn from your first attempt to win a BIE vote for a Minnesota Expo?

We were very happy to win support from the U.S. Congress and both President Obama and President Trump, resulting in the U.S. officially rejoining the BIE. With this major accomplishment, we can now turn our full attention to refining our proposal to reflect important lessons we have learned from recent Expos, especially Milan 2015 and Astana 2017, and from the work underway preparing for Dubai 2020. Our new bid will focus on the same theme, location, etc. but it will reflect the very fast pace of change with our area of focus – health and wellness – and our understanding of where the general public, policymakers, and the media might have the greatest interest in 2027.

One of the most important lessons we learned in our first bid was the powerful synergy we have in our partnership with the United Nation’s 2030 Agenda for Sustainable Development. This is an ever expanding global campaign that will be one of our key partners in all aspects of our Minnesota Expo.

Will you stick with the same theme that you had for the 2023 bid?

The importance of health as a theme was once eloquently summarized by BIE Secretary General Vincent Loscertales, in the following words. “The BIE welcomes this chance for Expos to catalyze international cooperation around a theme that is truly universal. Health has always been, and continues to be, the main concern of all. If there is a hierarchy of priorities, health is at the top. An Expo about health is also an opportunity to deal with a theme that lends itself to a multitude of approaches.

Indeed, this is a very appropriate choice since, by its very nature, an Expo is a multicultural, cross-disciplinary endeavor undertaken by the international community – with contributions from the public and private sector, governments and civil society, developed economies and less developed economies—offering a wealth of diverse knowledge and experiences. Merely bringing these key players together, however, is not enough. It is necessary to spark positive synergy that can channel the intellectual contributions, the practical efforts and the human resources towards a common goal. Expos are capable to do so by encompassing dialogue, action and innovation at the same time and in the same place.”

Do you have a preferred site for the expo?

Yes. We have chosen an ideal location conveniently located along our light-rail line and near our international airport – the #1 rated airport in North America, serving 30-40 million passengers per year – on bluff lands above the confluence of the Mississippi River and the Minnesota River. This site is in the City of Bloomington, next door to the most popular tourist destination in North America, the Mall of America, that currently welcomes over 40 million annual visitors.

What do you project for attendance?

We expect to average over 150,000 visitors per day with about 80% of attendees coming from within a day’s drive – a region that currently includes about 55 million people. Between now and 2027 there will continue to be significant population growth in North America so attendance could be higher.

Does U.S. renewed membership in the BIE (which you made possible) help in going through the bid process?

Yes, it is a game changer. This renewed U.S. membership in the BIE comes with unanimous consent from the entire Congress and with strong backing from two Presidents. This bi-partisan support has unlocked a great deal of valuable and ongoing assistance from the US State Department and from other agencies of the U.S. federal government like the Commerce Department and key staff in the White House. This federal support is in addition to our very strong partnership with both the local and state governments, giving our bid incredible energy, strength, and momentum.

Jim Ogulhttps://www.inparkmagazine.com/talesfromtheexpo/
Since retiring from the US State Department in 2011 after a 30+ year career in world expos, James Ogul ([email protected]) has remained on the scene in an advisory and consulting role. He writes regularly for InPark Magazine about world’s fairs. See his free online book, Tales From the Expo.
Share
Facebook
Twitter
Linkedin
Email
Print
WhatsApp
Pinterest
ReddIt
Tumblr
Previous article
Technology shines and friends gather at MuseumExpo 2018
Next article
Picsolve Takes its Photo Services to New Heights at 360 CHICAGO