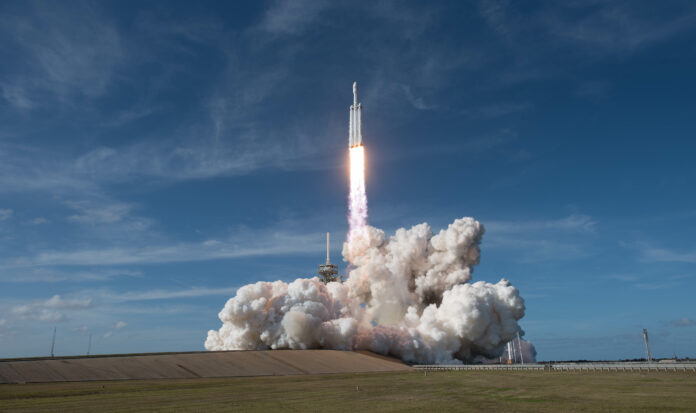 ABOVE: The first launch of the SpaceX Falcon Heavy Rocket on January 6, 2018. Photo by Daniel Oberhaus, via Create Commons 4.0 International License.

It was a beautiful afternoon on Omelek Island in the South Pacific. The date was August 3, 2008 and the SpaceX Falcon 1 rocket was perched on the launchpad, fueled and ready to go. Elon Musk huddled in a trailer parked in the back of the SpaceX factory in Hawthorne, California with a small group of his senior staff members.

One can only imagine what must have been going through his head as Musk monitored images and telemetry from across the Pacific Ocean. This was the third attempt to launch the Falcon 1. He had invested his personal finances in SpaceX, and announced to the world that it was only enough to fund three launch attempts. If this launch failed, he and his entire team faced defeat.

At 3:34 p.m, the rocket cleared the launchpad and soared gracefully on its way to low-Earth orbit. A flawless flight…for the first two minutes and 49 seconds. As the first stage shut down and began to separate from the second stage, the Merlin-1C engine sputtered one last ‘kick’ of thrust, causing the two stages to collide. As for what happened next, let’s just say that there’s a reason we don’t design bumper cars with large, pressurized tanks of liquid oxygen and highly refined kerosene on board.

You probably thought my inspirational intro was leading up to a successful launch, followed by cheers, high-fives, and hugs. But what followed was even better – and something that I believe all companies should aspire to achieve.

Every member of the SpaceX team who witnessed that catastrophic flight knew what was at stake. Perhaps they expected Musk to say something fatalistic. Instead, he took a moment to reflect on how difficult their mission was…how many other organizations and nations had failed to make it as far as they had. Then he told everyone to regroup – because they had a lot of work to do. He made it clear that he will never give up…never…. and if they stick with him, they will succeed.

The team rallied. Within hours, they had combed through the data, proposed solutions, and shared this information openly to earn the trust of investors. Within weeks, they secured financing and built a completely new Falcon 1 rocket. Then on September 28, 2008, a mere 56 days after the “Rapid Unplanned Disassembly” that nearly tanked the company, the fourth flight of Falcon 1 made history: The first privately built launch vehicle had achieved Earth orbit.

Though we may not build rockets in our profession (not REAL ones anyway!) there are many things we can learn from a company like SpaceX that shatters preconceptions with bold innovation. How do they do it? Although there are many forces at play here, I believe it all starts with what I would consider the foundation of any organization, the company mission.

Ever since its inception, the mission of SpaceX has been “to revolutionize space transportation with the ultimate goal of making life multi-planetary.” This mission statement was echoed throughout the company and broadcast to the world to attract the talent they needed to achieve this goal. The staff were inspired and emotionally invested in this company mission, and they wanted to work alongside leaders and colleagues who felt the same way.

That is the power of cultivating a company culture that is mission-driven. When united in a common purpose, the team will come together and bring their diverse backgrounds, skills, ideas, and personalities to work in the interests of the team and and advance the mission. They feel safe speaking up and trust those around them to do what is best for the team. They will always rally to overcome challenges and will also share in the joy of success. In my experience, this is the best way to foster a collaborative and innovative team: Unite them with a common cause.

Whether your organization has been in business for 50 years or is just starting out, it’s never too late (or too early) to craft a statement that captures your mission. It’s not easy! But if you get to the heart of the matter, you will have a mission and goals that your people connect with.

To define a mission that really resonates with people and inspires them to be emotionally invested, you’ve got to dig deep into your gooey insides for the real answer. Think about what your company is really all about. What makes it special and unique? What problems is it trying to solve? What ideals motivate your best staff members to put in that something extra and see a project to a successful finish? If you founded the company, what inspired you to put in the long hours and dedication necessary to get the place off the ground? I can’t tell you what your inspirational message will be, but when you finally have it and you say it out loud, it should ignite a fire in your belly.

At Alcorn McBride, “we create innovative tools that empower attraction designers to bring memorable experiences to life.” That mission absolutely fires me up every day. Our team is driven by the mutual desire to meet tough problems with creative technology solutions. The real reward is being closely connected to the designers we work with, so that we can celebrate building amazing attractions together.

Once you’ve figured out why your company really exists, take the time to make sure that this inspirational message becomes woven into the fabric of your organization. It should be spoken out loud whenever important decisions are being discussed, broadcast in your recruiting efforts, and at the forefront of your company’s marketing campaign. If you do this right, everyone who hears your company’s name should know exactly what the organization and its people stand for. This will attract employees who are inspired by your message, and it will also attract clients whose passions align with your long-term goals.

On the flip side, you may find that your message doesn’t resonate well with some employees and clients. If so, that’s ok. The mission helps you stay on your true path, but that path may not be for everyone. Some employees might not be fulfilled working at your organization, or by their role on the team. A client that doesn’t align well with your company values might lead you and your team in an unfulfilling and unproductive direction. Both situations have the potential to hurt morale and stifle even the strongest of companies. Knowing what your company stands for is the best way to figure out who you can and cannot make happy. It ensures that you cultivate the right team, client base, and project workload so that everyone involved is engaged and inspired by the work they are doing.

He probably wasn’t thinking about rockets or coaster lifts when he spoke, but I appreciate the wisdom of the late author and business coach Zig Ziglar, who said, “Your attitude, not your aptitude, will determine your altitude.” If a team of fewer than 400 people running on rocket fumes can take a company from ashes to industry icon in 56 days, just imagine what any of us can achieve. • • •