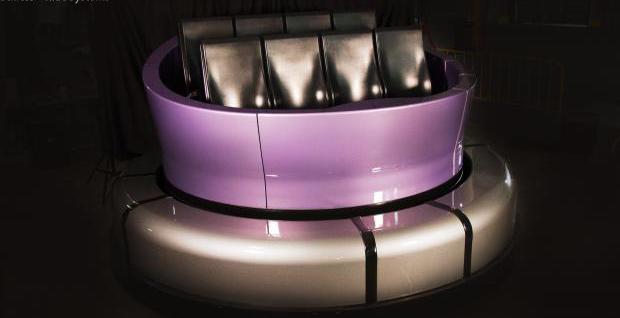 Orlando, FL, USA — Alcorn McBride and Oceaneering Entertainment Systems have collaborated on the development of AmpTraXX, a DSP-enabled 16-channel ride vehicle amplifier.  It is being shown at IAAPA Attractions Expo, November 18-21, in the Orange County Convention Center in Orlando.

“We told Alcorn that the ride market needed a better ride vehicle amplifier product, and they quickly understood what we were talking about,” says Matt Kent, head of creative services at Oceaneering Entertainment Systems.  “Before AmpTraXX we had to specify separate marine amplifier and playback units and make more room inside the vehicles to accommodate them.  Now, we have a complete audio system from Alcorn consisting of the AM4 audio playback unit and the new AmpTraxx amplifier.  Combining these allows us to achieve a much smaller footprint which is an incredible lifesaver for us – it means less equipment to cram into a vehicle..”

“Alcorn McBride’s track record for customer service is amazing,” adds Kent.  “They respond to us instantly.”  Rob Trudell, Oceaneering project engineer, notes that Alcorn “really stepped up to the plate” to develop a product that met the very specific needs of  Oceaneering-caliber ride vehicles.  “They had an operational demo ready for usin only two weeks and our complete production runin four months!  That’s amazing!”

He marvels that AmpTraXX has “16 channels of audio in the footprint of a device that would normally have 2 or 4 channels.  Before, it would have taken four or more devices of the same footprint to give us the equivalent output.  It has digital signal processing on board so we for the first time, we don’t need additional devices to achieve the same task.  And custom brackets from Alcorn allow the AmpTraXX and Alcorn’s AM4 Digital Audio Machine to be stacked, which frees up a lot of panel space.  Unlike a typical amp or speaker system, which is generally obsolete within 6 months, AmpTraxx is going to be on the shelf for a minimum of five years.  I can just put it into a vehicle and not worry about it.”

AmpTraXX has been uniquely designed for vehicle applications. Alcorn McBride Director of Engineering, Jim Carstensen, compares its size to that of “a large hardcover book, which is tiny for a 400-watt unit.”  Each 25W channel of AmpTraXX has independent DSP capability, including a 9-band EQ, dynamic range and compression control (DRC), as well as gain and stereo/mono mixing capability.  Channel pairs can also be bridged to provide 50W if more power is required.  AmpTraXX is easily programmed with graphical Windows and Mac OS compatible software included with each unit.

All settings are non-volatile, and the USB and serial interfaces can also be used for on-the-fly volume and mute adjustments for installations equipped with a control system.  AmpTraXX can even be controlled directly from RideTraXX, eliminating the need for an external control system.

Each amplifier is completely protected against short-circuit and overdrive events, and all inputs and outputs are on vibration-resistant, locking connectors to guarantee years of maintenance-free operation.  A dual-color LED constantly displays the status of the unit.

Applications for the new AmpTraXX include not only theme park ride vehicles but also multi-lingual transportation systems and tour buses.

Joe Kleimanhttp://wwww.themedreality.com
Raised in San Diego on theme parks, zoos, and IMAX films, Joe Kleiman would expand his childhood loves into two decades as a projectionist and theater director within the giant screen industry. In addition to his work in commercial and museum operations, Joe has volunteered his time to animal husbandry at leading facilities in California and Texas and has played a leading management role for a number of performing arts companies. Joe has been News Editor and contributing author to InPark Magazine since 2011. HIs writing has also appeared in Sound & Communications, LF Examiner, Jim Hill Media, and MiceChat. His blog, ThemedReality.com takes an unconventional look at the attractions industry. Follow on twitter @ThemesRenewed Joe lives in Sacramento, California with his fiancé, two dogs, and a ghost.
Share
Facebook
Twitter
Linkedin
Email
Print
WhatsApp
Pinterest
ReddIt
Tumblr
Previous articlePicsolve to Provide All-in-One Photo Solution Across All Dubai Parks & Resorts Destinations
Next articleTEA Announces 2015 Thea Recipients at IAAPA Attractions Expo; Universal and Disney Joined by Innovative Museums, Parks, Attractions, and the Newest Lifetime Award Recipient