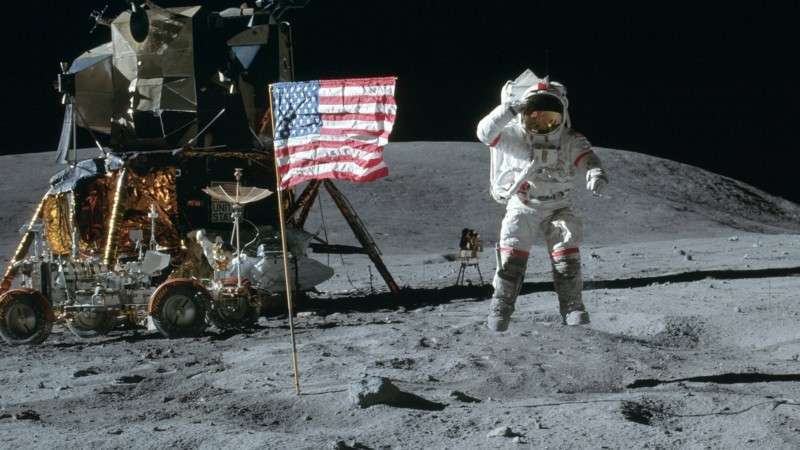 July 20, 2019 marks the 50th anniversary of Neal Armstrong and Buzz Aldrin’s arrival on the moon. NASA facilities, science centers, and planetariums around the world will be holding festivities to commemorate the event. Here are five locations to celebrate the landing that have direct ties to the Apollo 11 mission:

The National Air and Space Museum has a unique connection with Apollo 11. Michael Collins, the mission’s Command Module Pilot, happened to be the museum’s third Director, serving from 1971 to 1978, during which time the current building on the National Mall was constructed and opened.

While Columbia, the Apollo 11 command module, remains on tour as part of the “Destination Moon” traveling exhibition (it can currently be seen at the Museum of Flight in Seattle, Washington, the National Air and Space Museum is showcasing a special exhibit, “50 Years from Tranquility Base,” which includes a replica of the American flag placed on the moon by Apollo 11 and Michael Collins’ operations manual, among other artifacts. The Columbia will return to its permanent home in the museum in 2022.

On the evening of the 20th, the museum will present “Apollo 50: Go for the Moon,” a 17-minute show that will combine full-motion projection mapping artwork and archival footage to recreate the launch of Apollo 11 and tell the story of the first Moon landing. The show will unfold on the face of the Washington Monument and supporting screens, including a 40-foot-wide recreation of the famous Kennedy Space Center countdown clock.

Later in the evening, there will be a late night party inside the museum with a rebroadcast of the landing at 10:30 pm and a countdown to 10:56 pm, the minute Armstrong set foot on the moon.

Under the leadership of Werner von Braun, the propulsion systems for America’s rockets were developed at the Redstone Arsenal and its Marshall Space Flight Center in Huntsville, for which the Space and Rocket Center acts as visitor center, including the massive Saturn V engines that propelled the Apollo missions to the moon.

At 2:30 pm, the Space and Rocket Center will host a program in its National Geographic Theater titled “Pass the Torch: Apollo 11 – America’s First Landing on the Moon,” a panel discussion about Marshall Space Flight Center’s role in the successful landing on the moon and the trials and tribulations of developing rockets capable of carrying humans into deep space.

The world-premiere exhibition “Apollo: When We Went to the Moon” chronicles the timeline from the beginning of the Space Race – a time when the U.S. and Soviet Union competed over their accomplishments in space exploration – to the collaborative culture of the International Space Station program and beyond.

Experience the best of technology and exploration through the eyes of the engineers and in the boots of the astronauts who took humans to the moon 50 years ago. Enjoy an Apollo 11 launch experience and explore artifacts and media memorabilia highlighting the turbulent nature of this pivotal era in history.

Space Center Houston is the visitor center for the Johnson Space Center, home of the recently restored Apollo Mission Control.

“Apollo 11 50th Live” is an all-day lunar celebration and countdown to Neil Armstrong’s first steps on the Moon. Discover an array of space-themed experiences including late-night NASA Tram Tours, notable speakers, book signings, an outdoor festival with a concert, a family STEM zone, and more.

The only way to see what goes on behind the scenes at NASA Johnson Space Center (JSC) is through Space Center Houston. The center’s NASA Tram Tours feature an opportunity to visit the Apollo Mission Control Center, a national historic landmark. From this iconic room, the NASA team exercised full mission control of Apollo 11 from leaving the launch pad at the Kennedy Space Center to splashdown in the Pacific Ocean. Just in time for the 50th anniversary of the Apollo 11 mission, the room has been restored back to how it originally looked in the 1960s. Visitors this summer will be among the first to see the restored control center and feel like they are stepping back in time as they watch the original consoles operate and enjoy an immersive audio-visual experience that will allow them to witness the pivotal moments of the Apollo 11 mission in the same space where they happened.

A floating museum located near Oakland and San Francisco, the USS Hornet aircraft carrier served as recovery and quarantine ship for the Apollo 11 and Apollo 12 crews.

“Splashdown 50” commemorates the five Apollo missions from 1968-1969, leading up to and including Apollo 11. The celebration will also frame the Apollo mission within its time as the Hornet explores the past, present, and future of space exploration programs planned by NASA and private commercial space companies. Splashdown 50 offers visitors an exciting opportunity to learn about the past and how it leads us into the next generation of space exploration. A highlight of the event will be the opportunity to meet the historic NASA & USS Hornet Veteran Naval Apollo Recovery Team who retrieved the capsule and the astronauts as it returned from space. The crew will gather on the main stage and share their roles played on the anniversary of this historic day.

It was from the Kennedy Space Center’s Launchpad 39A that Apollo 11 launched on July 16, 1969, destination: Moon. On the 50th anniversary of that date, KSC’s newly transformed Apollo/Saturn V Center opened to the public.

During KSC’s “One Giant Leap Celebration,” visitors can get up close to Neil Armstrong’s actual blue Corvette and a red Corvette signed by Armstrong and 44 other astronauts. These automobiles will be on display in front of Heroes & Legends, welcoming all into the visitor complex. You can view footage of the Moon landing and those iconic first steps throughout the day in the Rocket Garden, and at 10:00 AM, 1:00 PM and 4:00 PM, a visitor complex communicator will guide you through the historic landing events and answer any questions.

For future space explorers, there will be a Kid’s Activity Area in the Rocket Garden as well. There, they will enjoy hands-on, engaging activities. There will also be other fun giveaways for kids on a first come basis.  A DJ will also be around to spin 1960s classics throughout the day, and will host hula hoop contest and offer trivia and fun Apollo facts at 11:00 AM and 2:30 PM.

At noon, the Hayden Planetarium will feature “Apollo 11 Lands on the Moon,” with Director of Astrovisualization Carter Emmart presenting a digital recreation of the iconic mission’s flight and landing. The planetarium is introducing its new Christie RGB laser projection system, making it the first digital planetarium with HDR (high dynamic range) functionality and a contrast ratio of more than 1,000,000:1 (in layman’s terms, vividly rich colors will pop out and blacks will appear as black as space).

Joe Kleimanhttp://wwww.themedreality.com
Raised in San Diego on theme parks, zoos, and IMAX films, Joe Kleiman would expand his childhood loves into two decades as a projectionist and theater director within the giant screen industry. In addition to his work in commercial and museum operations, Joe has volunteered his time to animal husbandry at leading facilities in California and Texas and has played a leading management role for a number of performing arts companies. Joe has been News Editor and contributing author to InPark Magazine since 2011. HIs writing has also appeared in Sound & Communications, LF Examiner, Jim Hill Media, and MiceChat. His blog, ThemedReality.com takes an unconventional look at the attractions industry. Follow on twitter @ThemesRenewed Joe lives in Sacramento, California with his fiancé, two dogs, and a ghost.
Share
Facebook
Twitter
Linkedin
Email
Print
WhatsApp
Pinterest
ReddIt
Tumblr
Previous articleWho’s Universal Studios gonna call for their first Halloween Horror Night mazes in franchise history? Ghostbusters
Next articleSpeakers announced for IAAPA Expo Europe 2019

Blackpool Pleasure Beach: Coasters and carousels by the sea