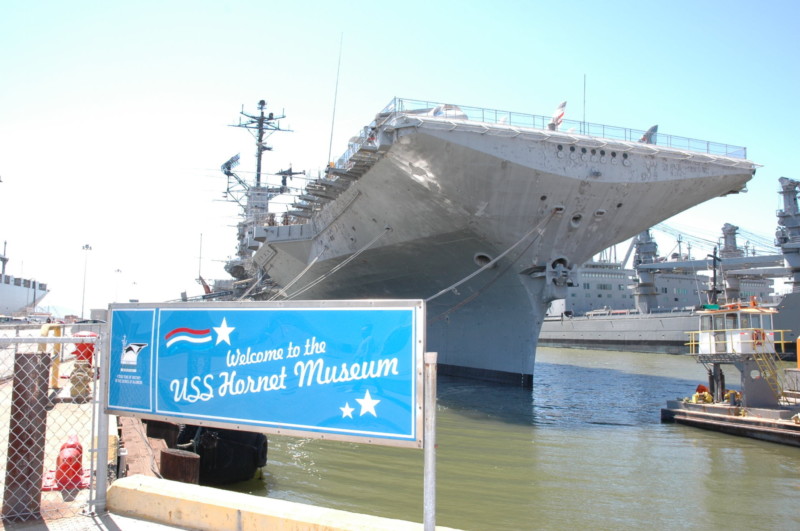 [dropcap color=”#888″ type=”square”]O[/dropcap]f all the achievements of mankind, there are few that stand out above others – one of those is the act of safely sending humans to another celestial body and bringing them home safely to earth again.  This month marks the 45th anniversary of the first of those journeys to successfully land men on the moon, Apollo 11. There are certain places around the USA where one can encounter the relics of that mission – the Kennedy Space Center in Florida with its enormous Vehicle Assembly Building, Mission Control and the astronaut training facilities at the Johnson Space Center in Houston, the actual capsule at the National Air and Space Museum in Washington, DC, and the fourth location, a giant aircraft carrier docked on the shores of San Francisco Bay with the famous city itself framed across her stern.  Unlike the other locales, where the artifacts make up just a portion of the facility, the entire ship, the USS Hornet, is the artifact. 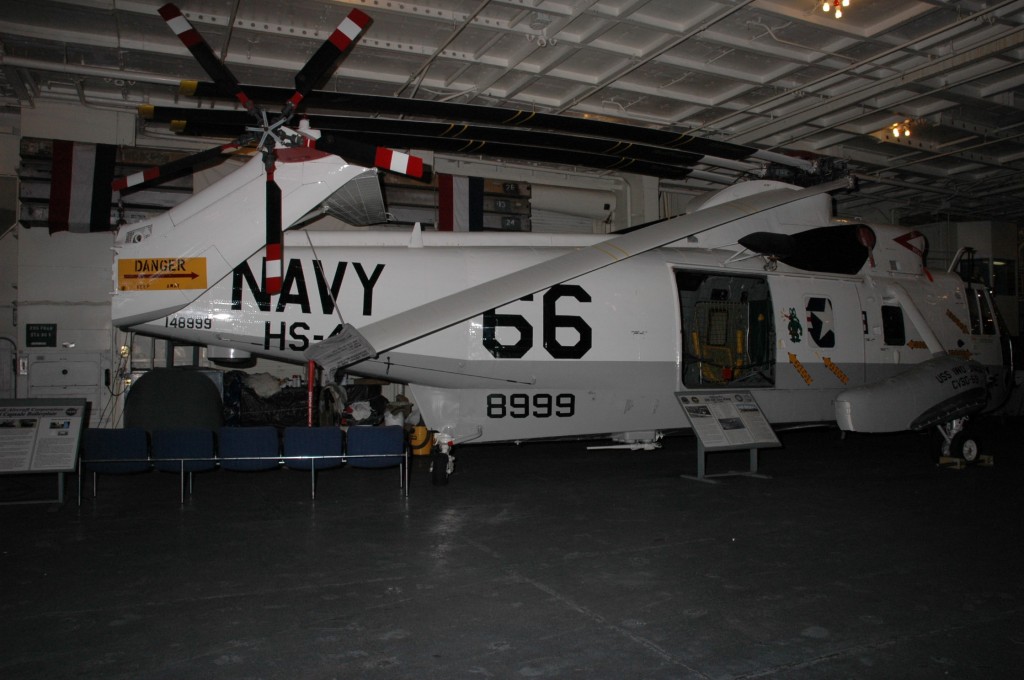 [dropcap color=”#888″ type=”square”]J[/dropcap]ust days after she returned from her third tour of combat duty off Vietnam, the USS Hornet aircraft carrier was designated as the primary recovery ship for the Apollo 11 mission.  She made a single 14-day trip entailing two designated missions.  The first was to the equator in the center of the Pacific Ocean.  As the spaceship circled the planet three times to gain momentum for its lunar journey, the ship sat there in the dark midst of the sea prepared to rescue the astronauts if the flight was aborted.  According to Bob Fish, trustee of the USS Hornet Museum and author of Hornet Plus Three, crew members on the flight deck saw what they thought was a comet fly over the ship in the middle of the night.  It was the Apollo crew preparing to head to the moon.

After eight days at sea, the Hornet took on its second mission, approaching the recovery point for the astronauts after their splashdown.  As this was the first return of men and rocks from the moon, quarantine procedures were in place (as dictated by the Extra-Terrestrial Exposure Law, 14 CFR Part 1211 of the Code of Federal Regulations).  On July 24, 1969, Columbia, the command module of the Apollo mission, splashed down in the Pacific.  Sea King helicopter #66, designated Recovery One, flew out to pick up the astronauts. Once the capsule was secure in the water, a decontamination specialist entered approached the capsule by raft.  He put on a Biological Isolation Garment (BIG) and handed three more to the crew members, Neil Armstrong, Buzz Aldrin, and Michael Collins.  Once they had donned the BIG garments, they were lifted to the helicopter.  For the remainder of their trip, until their return to Houston, the three astronauts would remain in quarantine.

[dropcap color=”#888″ type=”square”]W[/dropcap]ithin the hangar deck of the USS Hornet sit three artifacts that tell the story of the Apollo splashdown.  They are placed in the exact same locations within the deck where their historic predecessors were in 1969.  Helicopter #66 landed on the flight deck and was lowered to the hangar deck by elevator.  The astronauts then left the helicopter, wearing their BIG suits and entered the Mobile Quarantine Facility (MQF), a silver trailer, directly across from the helicopter.  Already residing inside the MQF since the day the Apollo 11 rocket launched were a technician and their Flight Surgeon.  The ship would later sail directly next to the capsule and bring it onboard via crane.  The technician was the only one that left the MQF, accomplished through a secured plastic pathway attached to the capsule, by which he could collect the moon rocks.  With that exception, the astronauts and their two companions remained within the trailer the entire duration of the cruise.  They remained in it at Pearl Harbor when it was removed and placed on a transport.  And they remained in it as it was placed in a C-130 for transport to Houston. 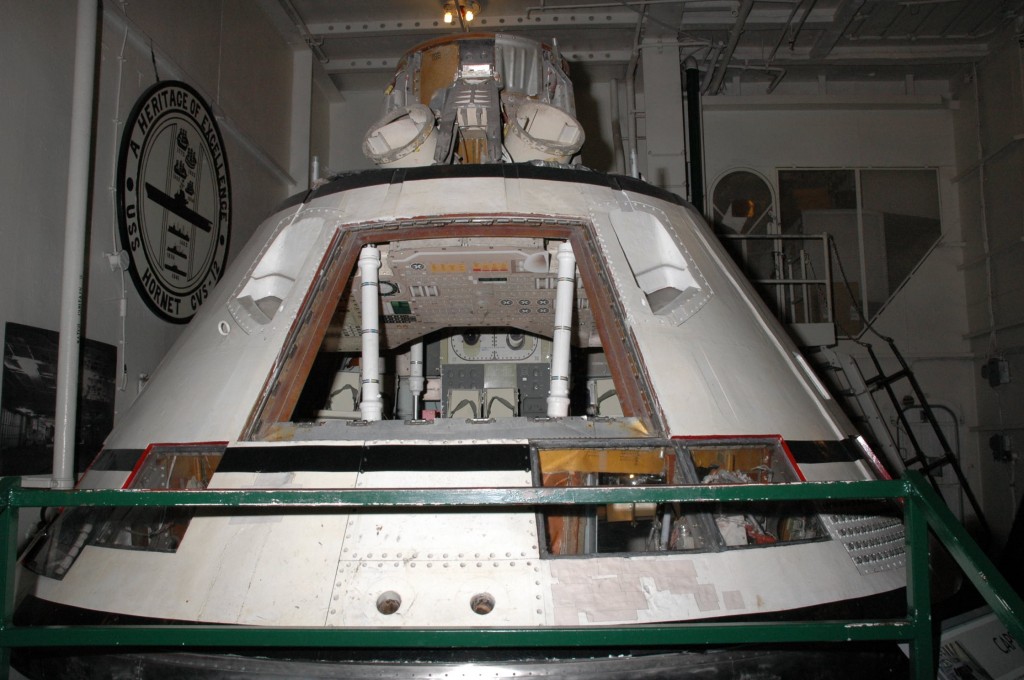 None of the three artifacts are the original, but each comes with its own unique historical significance.  The original helicopter #66 crashed into the ocean in 1975 and has never been recovered.  The Sea King on display was used to recover astronauts Edward White and James McDivitt of Gemini 4, the mission which featured White performing the first spacewalk by an American.  Later, this helicopter was repainted #66 and used for the filming of Ron Howard’s Apollo 13.  The MQF on display was used on the Apollo 14 mission, the final Apollo flight to require astronauts to undergo quarantine.  As the original Columbia command module sits in Washington DC, the command module chosen to represent it on display is one that set the groundwork for the Apollo 11 flight.  Command Module 011A was built alongside the command module for Apollo 1.  This unmanned test vehicle was launched into space in a suborbital flight, and reentered the atmosphere at what Fish says was the highest velocity reentry on record.  Later, it was drop-tested to see if it would withstand an impact on hard earth.  The damage to the capsule from that drop remains and can be seen in person.

The Apollo 11 splashdown was different from others for a number of reasons.  It was the first to recover men who had actually walked on the moon.  The large number of credentialed press onboard – 240 in total – was eclipsed by the stature of the highest ranking guest on the ship – the President of the United States, who was joined by, among others, Secretary of State Henry Kissinger and Navy Admiral Jack McCain, whose son, current Senator, John McCain, was a prisoner of war in Vietnam at the time.  The three, along with other delegates and members of the ship’s senior staff, stood above the flight deck to watch the astronauts arrive.  They later proceeded down to the hangar deck, where President Nixon addressed the astronauts through a window at the end of the MQF.  It is the only time in history a President welcomed home Apollo astronauts in person.  An estimated one billion people worldwide watched and listened to the recovery and the President’s talk with the astronauts on television and radio.

[dropcap color=”#888″ type=”square”]T[/dropcap]he USS Hornet is a Naval combat vessel.  Fighters and bombers can be found throughout the hangar and flight decks.  When it comes to education, which is an important part of the museum’s mission, STEM has found its way to the forefront.  As Fish says, “We can really relate to kids and help them in their science and technology education when we use the aircraft and spacecraft to teach them about aeronautics or space travel.”  On July 26, the Hornet will host Splashdown 45 presented by California Casualty.  As California Casualty and the USS Hornet Museum are both heavily invested in STEM education, it will be a key component of the event.  Splashdown 45 will feature Apollo 11 astronaut Buzz Aldrin as featured speaker.  Its theme “Honoring the Past – Inspring the Future” will examine how America can return to space while fighting a potential new space race against emerging superpowers such as China.  Aldrin’s new book Mission to Mars, which examines these issues, will be a key part of the discussion.  Numerous museum partners will be on hand to provide STEM-based mini-classes centering around a US mission to Mars as discussed in Aldrin’s book. 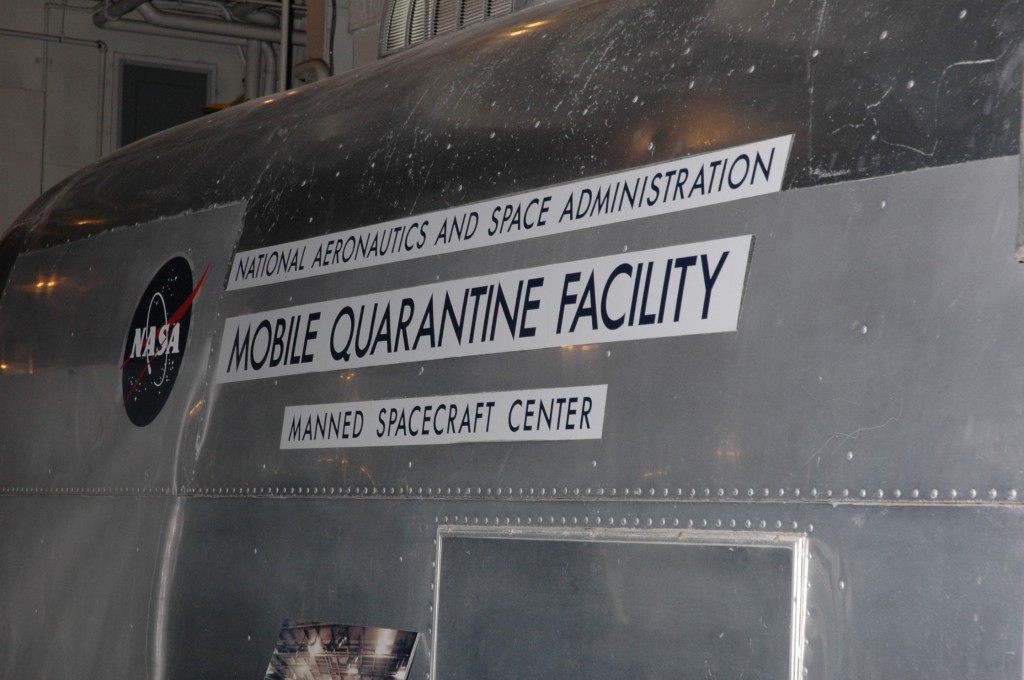 Other special guests will include Clancy Hatleberg, the Swimmer Recovery Team leader on the Apollo 11 recovery; Dr. William Capentier, NASA Flight Surgeon for Apollo 11 and resident of the MQF; John Stonesifer, who oversaw quaratine procedures for Apollo 11 and 12; John Hiraski, who stayed in the MQF with the astronauts and Dr. Carpentier and collected the moon rocks from the capsule; Bruce Johnson, co-pilot of Sea King #66 on the recovery mission; broadcaster Don Blair who was onboard the Hornet to report for Mutual Radio; and USS Hornet Museum trustee and author of Hornet Plus Three, Bob Fish.

[dropcap color=”#888″ type=”square”]T[/dropcap]he USS Hornet is moored at the north end of Alameda, an island adjacent to Oakland, CA.  She was the recovery ship for Apollo 11 and 12.  She fought in World War II and throughout the Cold War, including Vietnam.  And she’s home to ten spirits of “friendly crew members” who still reside upon the ship.  Above all, she is a living history museum that enables us to relive a single moment of unequaled time in July of 1969.

ALL PHOTOS, unless noted, by Joseph Gutierrez ([email protected]) for InPark Magazine

ALAMEDA, CA – July 10, 2014 – Mark your calendars! The USS Hornet’s Splashdown 45 (SD45) is just around the corner. This uniquely-special event celebrates the 45th anniversary of the historic Apollo 11 moon landing and commemorates the safe recovery of the astronauts and their command module by the aircraft carrier USS Hornet CVS-12.

The event’s special guest is Buzz Aldrin, famed Apollo 11 astronaut and one of the first men to walk on the moon. He is also the best-selling author of Mission to Mars: My Vision for Space Exploration. Guests will have the opportunity to meet Aldrin during the day.

A special press conference with Aldrin will begin at 10 a.m.  Additionally, Airstream is providing one of its sleek aluminum trailers to act as a media center on the pier.

Joining the SD45 celebration this year is title sponsor California Casualty, which is proud to be part of the USS Hornet Museum’s Science, Technology, Engineering and Math (STEM) scholarship program.

SD45 will have a special emphasis on promoting STEM to youth and getting them excited about these important fields. The USS Hornet Museum is committed to educating future astronauts and scientists through its STEM program.

In addition, numerous other companies and organizations have joined as STEM partners, including first-time partner Goldie Blox, whose goal is to get more girls into the math, science, engineering and technology fields.

Other SD45 special guests will be the two winners of the Hornet’s local 5th Grade essay contest, “Why I Want to be an Astronaut When I Grow Up” – Grace Teuscher and Khushi Randez. Both Grace and Khushi will have the opportunity to have their photos taken with Aldrin. They will also receive passes for themselves and their families to attend the day-long SD45 event.

Throughout the day, visitors will have the opportunity to view a variety of artifacts on display, including a moon rock, an Apollo spacecraft and a mobile quarantine facility used to isolate the astronauts upon their return from the moon.

To learn more about the event, visit: www.hornetsplashdown.com.

The Hornet is proud to have the support of numerous sponsors and partners, for a complete list, please visit: http://www.hornetsplashdown.com/sponsors-donors-1-1/

Proceeds from Splashdown 45 will be used to continue the development of the USS Hornet Museum’s community outreach activities, including its youth education and STEM programs.

Joe Kleimanhttp://wwww.themedreality.com
Raised in San Diego on theme parks, zoos, and IMAX films, Joe Kleiman would expand his childhood loves into two decades as a projectionist and theater director within the giant screen industry. In addition to his work in commercial and museum operations, Joe has volunteered his time to animal husbandry at leading facilities in California and Texas and has played a leading management role for a number of performing arts companies. Joe has been News Editor and contributing author to InPark Magazine since 2011. HIs writing has also appeared in Sound & Communications, LF Examiner, Jim Hill Media, and MiceChat. His blog, ThemedReality.com takes an unconventional look at the attractions industry. Follow on twitter @ThemesRenewed Joe lives in Sacramento, California with his fiancé, two dogs, and a ghost.
Share
Facebook
Twitter
Linkedin
Email
Print
WhatsApp
Pinterest
ReddIt
Tumblr
Previous articleTicket Sales Now Open For SATE 2014
Next articleMultiple Thea Award Recipient Jerry Rees to Lead Creative Team for Hero Ventures’ “The Marvel Experience”