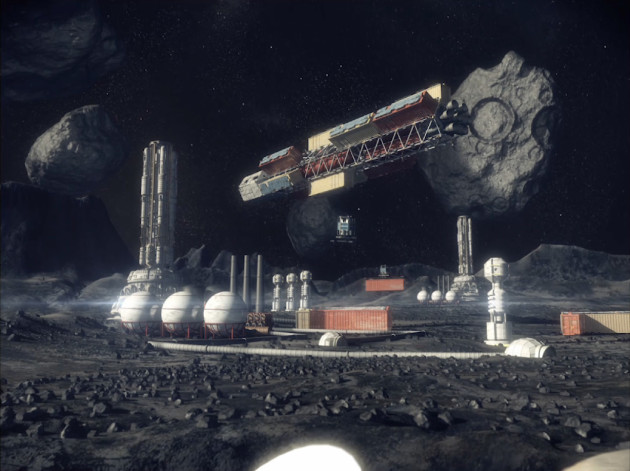 [quote]We work to help producers understand the market and create a great film, but we don’t take over their creativity and vision. We work cooperatively. With most producers, it’s very personal – they’re working on something that’s an important topic for them. For clients, we do whatever is needed to support them – including marketing, educational materials, technical requirements, exhibition quality, budget limitations and programming.”[/quote]

[dropcap color=”#888″ type=”square”]L[/dropcap]uke Ployhar began working on the new space documentary, SPACE NEXT, as a “passion project” to develop internally at his company, Afterglow Studios while continuing to contribute to other giant screen productions such as Space Junk 3D, Electropolis and Antarctica 3D: On the Edge. He founded Afterglow in 2006 after relocating from Los Angeles to the Minneapolis-Saint Paul area. With such films as Minority Report, Inspector Gadget, Planet of the Apes and Austin Powers under his belt, Ployhar found that his mainstream movie making skills in production, visual effects, 3D and animation transferred effectively to the alternate universe of special venue cinema.

[dropcap color=”#888″ type=”square”]B[/dropcap]y 2013 Space Next was mostly finished and Ployhar began showing trailers at GSCA conferences (Giant Screen Cinema Association – at this writing, another screening was set for March 8, during the GSCA Film Expo in Los Angeles), where he met distributor Tina Ratterman of BIG & Digital. “Tina was my first choice for a distributor,” said Ployhar. “A number of people had pointed me to her, and I liked her thought process. She’s interested in cross platforming and making the most of digital assets to reach as many markets as possible, including the new virtual reality markets.”

Boutique studio Afterglow partnered with boutique distributor BIG & Digital, and things began to happen. On Dec 4, 2015, Space Next opened in the newly renovated Giant Screen Theater at the National Infantry Museum (Columbus, Georgia). On Dec 17, Space Next had its European premiere at Tycho Brahe Planetarium (Copenhagen). US Space & Rocket Center (Huntsville, Alabama) opened it February 29. Space Next has since also been leased by TELUS Spark (Calgary, Canada) for a January 2017 premiere.

“With Space Next, there’s no way you can leave the theater without having learned something new about spaceflight and its history,” said Chris Brothers, Theater Technical Manager, US Space & Rocket Center. “School groups and the public attend the same shows. A number of the objects in the film are featured in the museum, from rockets to the ISS and SkyLab.”

“Space Next is a great fit, especially considering the inspiration it could bring to future space enthusiasts and young scientists and engineers,” said Cassondra Dickin, Communications Specialist, TELUS Spark. “We endeavor to bring quality programming to TELUS Spark that both delights and provides a learning opportunity. We anticipate the film will meet our community’s desire for space-related content along with our core focuses of science, technology, engineering, math, and even art (STEAM).” 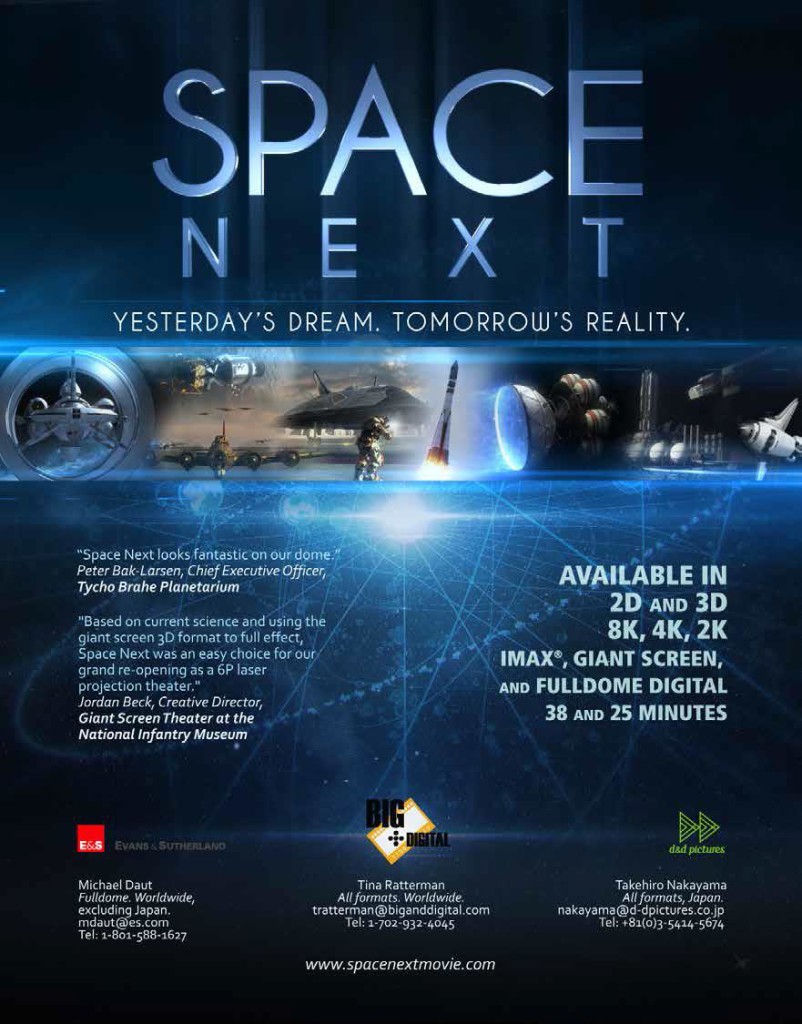 The primary markets for Space Next are museums, science centers and planetariums. On flat screens at museums and science centers, where film systems are quickly giving way to digital projection, Space Next will most often be screened in 4K 2D or 3D. Evans & Sutherland, a major player in the world of digital planetariums and dome theaters, has signed on to distribute the fulldome version of Space Next in resolutions up to 8K.

Space documentaries are a staple of the special venue market, where digital exhibition has opened up the field for all content in providing a greater number of compatible screens. “It happened organically,” said Ratterman. “A lot of museums have multiple theaters now and most of those are digital. They have more options for where they can show a film and how to position it. We’ve been able to adapt to that.”

Budgeting, selecting and installing a new, top-of-the-line projection system is a major undertaking for a nonprofit institution and exhibitors are inclined to choose content that will help show it off. “Based on current science and using the giant screen 3D format to full effect, Space Next was an easy choice for our grand re-opening as a 6P laser projection theater,” said Jordan Beck, Creative Director, Giant Screen Theater at the National Infantry Museum.

‘We’re showing it three times a day in a 2K 3D presentation in our National Geographic Theater, which uses a Barco DP2000 projector and a doremi dcp2K server,” said Chris Brothers, US Space & Rocket Center. 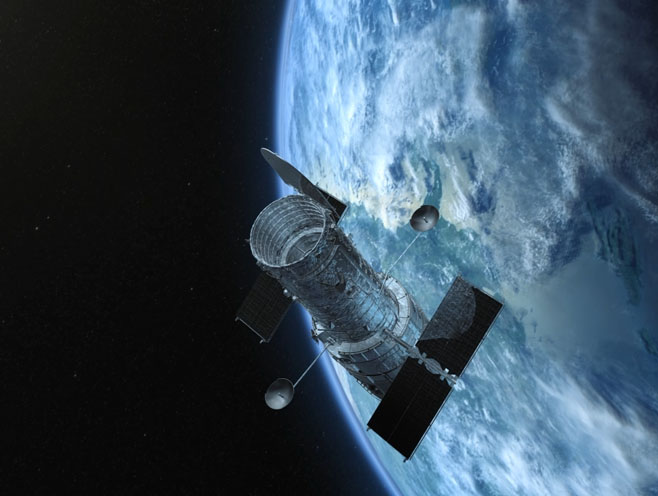 High-end fulldome systems have repositioned planetariums at the cutting edge of digital cinema, competitive with giant flat screens and other museum screens for content and for their institutions’ marketing dollars. This has been a game-changer, and Ratterman takes the fulldome market seriously. Space Next, BIG & Digital’s first space title, is being screened at several fulldome festivals and conferences, including the 2016 IMERSA Summit in Denver, March 16-20, and the 2016 IPS Fulldome Festival at Brno, Czech Republic, June 15-17. BIG & Digital’s next space title, IN SATURN’S RINGS, will also be available in resolutions up to 8K.

“8K is the future of the planetarium,” said Ratterman. “There’s an amazing variety of projection systems, and exhibitors need customization and flexibility. The growing network of Laser and 8K projection systems is sparking demand for 8K content. The quality of CGI in planetarium shows is getting better because of better tools as well as demand. Producers and distributors have to meet the new expectations. It’s challenging and rewarding.”

Flatscreen special venue systems will also upgrade to 8K, Ratterman foresees. “Outside of giant screen exhibition, 4K is still a fairly new, premium item, but there are plenty of indicators that will change relatively soon. Digital signage is now already a 4K platform. Giant screen will want to keep its edge of being the biggest, best and brightest.”

“Research shows how the market is changing, technologies are changing, the interests of younger audiences are changing,” said Ratterman. “We have the content to help bring in these new audiences and provide variety. Ours is not a typical giant screen library.” 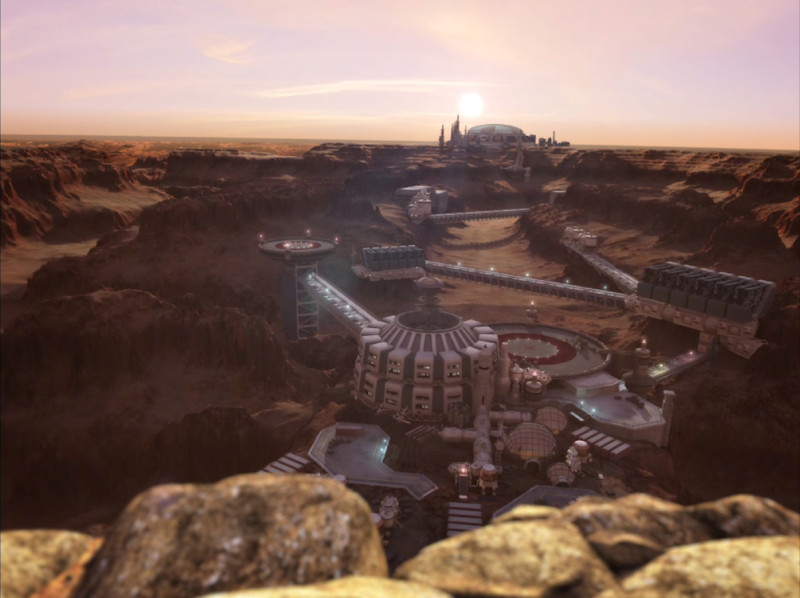 She and Ployhar see Space Next as an ideal product in that regard. Space Next provides what those younger audiences are drawn to, they explain – animation and special effects, lively pacing, compelling story and stellar production values, plus the “wow” factor of leading-edge research and development in the space industry.

Comments from exhibitors currently showing Space Next back this up. “It gave me the feeling of wonder I felt about

space travel when I was a kid,” said Elijah Terrell, Chief Projectionist, Giant Screen Theater at the National Infantry Museum, adding that “school age kids have been blown away.”

“The Space Next story is educational and at the same time very entertaining, and suitable for all ages. Guests have given us positive feedback,” said Peter Bak-Larsen, Chief Executive Officer, Tycho Brahe Planetarium.

BIG & Digital’s distribution vocabulary also includes 4D attractions, virtual reality and augmented reality. “Our 4K and 8K content is transferring well to 4D experiences,” said Ratterman. “Our giant-screen release DRAGONS, starring the great Max von Sydow, is doing very well as Dragons 4D, adapted by EON Reality and showing at the EON Idome in Laval, France.” Space Next, indicates Ratterman, will also soon enjoy an ancillary life as a 4D attraction film. BIG & Digital is also working with a leading developer to explore options for an interactive VR experience of Space Next, as shows that have been configured for fulldome readily translate to the wraparound format of a VR headset.

“Being a producer is a full-time job; that’s why you need a distributor,” said Ployhar. “Tina has her network of people she’s promoting to and connecting with, and all the business and industry insight she’s accumulated over the years. She’s been out there, making a lot of headway. She sees the crossover and ancillary markets. She has helped us leverage the digital assets of Space Next, giving it a longer potential life. We’re bringing vibrant new content to the market.”

“This is the first film we’ve booked from BIG & Digital and it very much fits the mission here. One thing we like about B&D is that they give a very personal touch that is much needed in the industry,” said Chris Brothers of US Space & Rocket Center.

“I go to bat for my producers and my clients,” said Ratterman. “We work to help producers understand the market and create a great film, but we don’t take over their creativity and vision. We work cooperatively. With most producers, it’s very personal – they’re working on something that’s an important topic for them. For clients, we do whatever is needed to support them – including marketing, educational materials, technical requirements, exhibition quality, budget limitations and programming.”

With a background in communications, advertising and special events, Ratterman got her start on the exhibition side of things in 1997 at the Kentucky Science Center. In 2003 she joined Giant Screen Films as director of distribution and marketing. She started BIG & Digital in 2009. 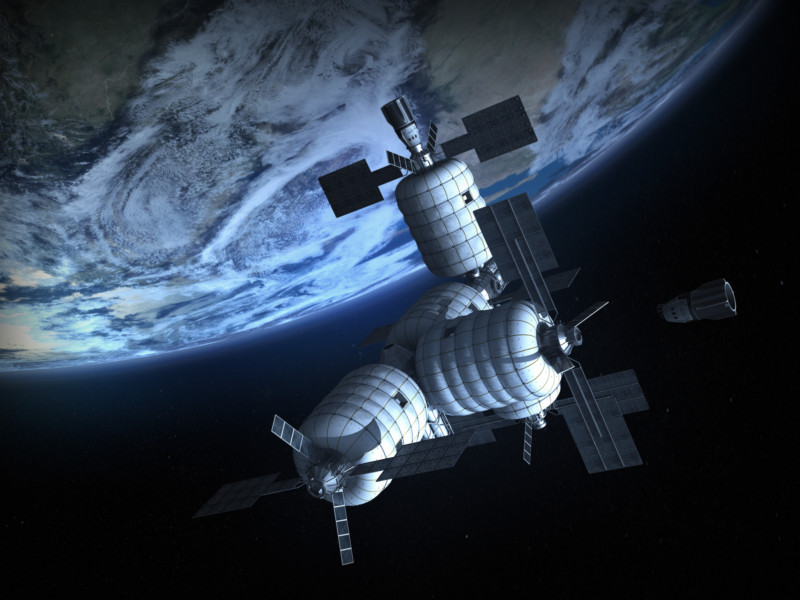 For Luke Ployhar, Space Next was a practical choice given market demand, but it was also a personal choice.

“With the space shuttle program having ended, people have so many questions about what’s really going on in the space industry, which is really quite a lot between privatization and government agencies,” he said. “So I set out to make a really cool film to show the future of the potential of space – and make it inspirational, solidly based on science, with everything vetted and researched, all showing what could realistically happen in the next 20 to 100 years, including warp drive. Even someone who doesn’t care much for science will be entertained by it. But I like thinking about the young person who may go on to become a scientist because they saw and were inspired by Space Next.”

The journey to reach the stars began with our earliest dreams of flying, and led to landing on the moon and sending a probe to Pluto. But that’s only the beginning. SPACE NEXT offers a glimpse into tomorrow, and the possibilities of what is to come by way of private space developments and national space programs. The result is an exhilarating vision of our future, based on real science, sure to inspire a generation of explorers, scientists, and dreamers. 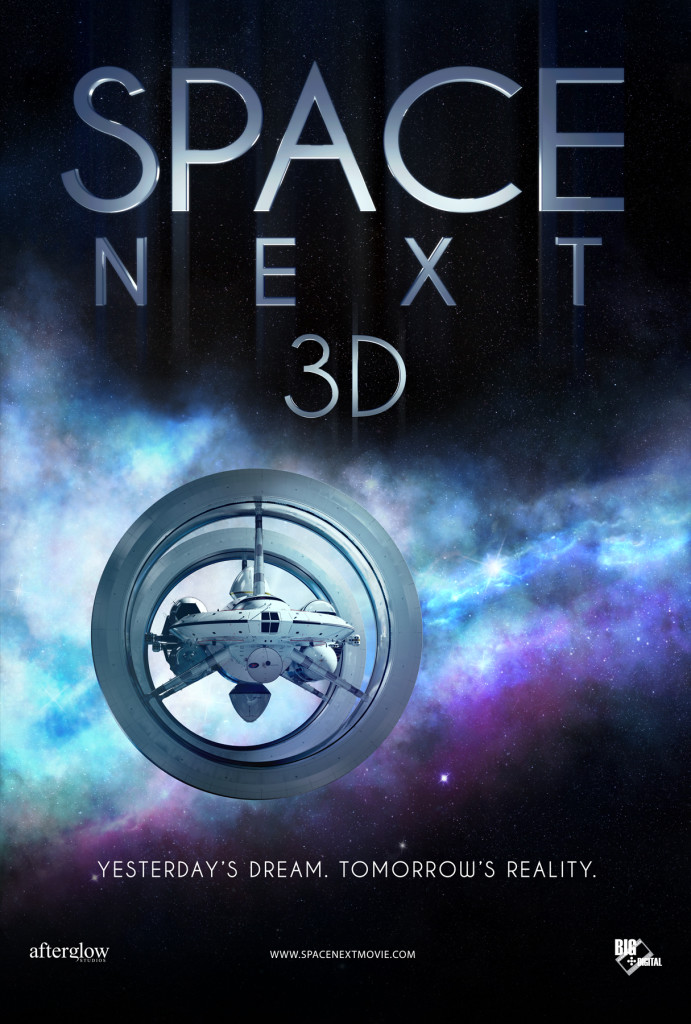 Joe Kleimanhttp://wwww.themedreality.com
Raised in San Diego on theme parks, zoos, and IMAX films, InPark's Senior Correspondent Joe Kleiman would expand his childhood loves into two decades as a projectionist and theater director within the giant screen industry. In addition to his work in commercial and museum operations, Joe has volunteered his time to animal husbandry at leading facilities in California and Texas and has played a leading management role for a number of performing arts companies. Joe previously served as News Editor and has remained a contributing author to InPark Magazine since 2011. HIs writing has also appeared in Sound & Communications, LF Examiner, Jim Hill Media, The Planetarian, Behind the Thrills, and MiceChat His blog, ThemedReality.com takes an unconventional look at the attractions industry. Follow on twitter @ThemesRenewed Joe lives in Sacramento, California with his wife, dog, and a ghost.
Share
Facebook
Twitter
Linkedin
Email
Print
WhatsApp
Pinterest
ReddIt
Tumblr
Previous article2015 Marked Banner Year for Thinkwell with Fourteen Projects Opened Worldwide
Next articleGSCA Film Expo and Filmmaker Symposium to Bring Together Best of Giant Screen in One Location