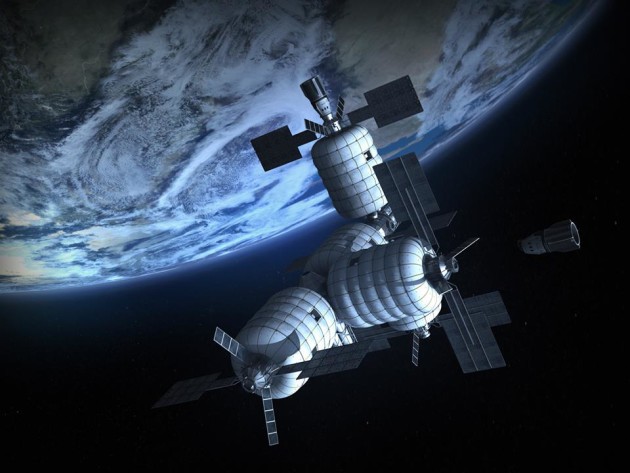 Las Vegas, NV, USA — Space Next, a space documentary produced by Afterglow Studios and distributed by BIG & Digital in multiple platforms (2D, 3D, flatscreen and dome, and resolutions up to 8K) for museums, science centers and planetariums has had its official premieres in the US and Europe. On Dec 4, 2015 Space Next opened in the newly renovated Giant Screen Theater at the National Infantry Museum (Columbus, Georgia). On Dec 17, Space Next had its European premiere at Tycho Brahe Planetarium in Copenhagen.

Jordan Beck, Creative Director for the Theater at the National Infantry Museum said, “Space Next is a stunning film that takes audiences on a journey of mankind’s pursuit of the stars. It’s a great film for our new theater.” The theater screening Space Next at the Museum has undergone a $1.8 million renovation which includes the conversion from film projection to state-of-the-art digital. The theater’s new 6P Christie laser projection system is the first of its kind in the Southeast, and the first to show Space Next 3D to the public.

“Tycho Brahe Planetarium is very happy to show this film to our guests who all have given us positive feedback on Space Next,” said Planetarium CEO Peter Bak-Larsen. “Space Next tells the exciting history of spaceflight up till today and gives an amazing and exciting prediction on the future of space travel. The film has some fantastic animations which look fantastic on our dome. The story is educational and at the same time very entertaining and suitable for all ages.”

“We worked with leading scientists and consultants from NASA and other institutions to create the visuals and story of Space Next,” said producer Luke Ployhar. “The film presents actual possibilities of what lies in the future of space development and exploration. The attention to detail of the visual effects are perfect for this topic on the Giant Screen.”

Space Next is available in all Digital formats, including flatscreen and fulldome, 4K and 8K, 2D and 3D. Run times include 38 and 25 minutes. The film is supported with a comprehensive marketing campaign and includes a 23 Page Educator’s Guide with activities to support Next Generation Science Standards. “BIG & Digital works hard to ensure that exhibitors can have access to a quality show in the presentation format they need to entertain and educate their audiences.” said the company’s president, Tina Ratterman.  “We’re very excited to offer a show of this caliber, with an inspiring and relevant story as well as breathtaking, state-of-the art imagery and evocative sound design.”

Joe Kleimanhttp://wwww.themedreality.com
Raised in San Diego on theme parks, zoos, and IMAX films, Joe Kleiman would expand his childhood loves into two decades as a projectionist and theater director within the giant screen industry. In addition to his work in commercial and museum operations, Joe has volunteered his time to animal husbandry at leading facilities in California and Texas and has played a leading management role for a number of performing arts companies. Joe has been News Editor and contributing author to InPark Magazine since 2011. HIs writing has also appeared in Sound & Communications, LF Examiner, Jim Hill Media, and MiceChat. His blog, ThemedReality.com takes an unconventional look at the attractions industry. Follow on twitter @ThemesRenewed Joe lives in Sacramento, California with his fiancé, two dogs, and a ghost.
Share
Facebook
Twitter
Linkedin
Email
Print
WhatsApp
Pinterest
ReddIt
Tumblr
Previous articleHarry Potter to Cast a Spell over Universal Studios Hollywood with Opening Date of April 7
Next articleGreg Lombardo & Scott Ault talk about 20th Century Fox theme park development: IPM exclusive, Part 2