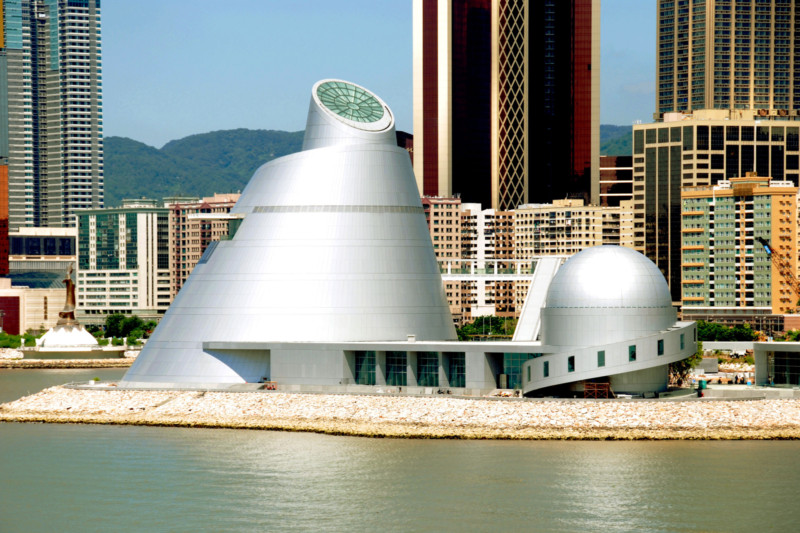 It took a while for the introduction of giant screen cinema into mainland China. It happened in 1992, almost twenty years after the introduction of the first IMAX projector. In that year, Iwerks installed an 870 projector in the dome theater at the Tianjin Museum of Science and Technology, another milestone in the more than two decades Iwerks has enjoyed as a leading supplier of immersive cinema content and systems in China.

Now known as Simex-Iwerks, after the 2002 merger of Simex, whose Tour of the Universe at Toronto’s CN Tower was one of the first modern themed motion simulator attractions, and Iwerks Entertainment, founded by former Disney executives Don Iwerks and Stan Kinsey, the company has been at the forefront of a number of immersive theater formats over the year, including giant screen, motion simulation, 3D, and 4D.

In the same year that Tianjin opened, Iwerks moved its Asia Pacific office from Singapore to Hong Kong. Later, it opened a new office in Shanghai. According to Mike Frueh, a veteran of the company since 1988 who currently holds the post of Senior Vice President, Film Distribution and General Manager, “We’ve been in China long enough that we have a great reputation there. Our Shanghai office is staffed by Chinese who can speak the local language and know the customs. And our service department for China is based there as well, with spare parts stored locally. Because of this, we haven’t had to partner up with another company to do business in China.”

The evolution of immersive cinema in China mirrors that of the Western world, although the reasoning behind attractions may not be the same. For instance, the current explosion of cineplex-based 3D and IMAX branded digital theaters that is happening in the States is also happening in China. But whereas here in the States the explained reasoning is higher revenue, there is another motive at play in China. Until last year, both IMAX and 3D were considered attractions by the Chinese government and were exempt from quotas placed on foreign feature films. Recently, that has changed, but up to 14 feature films above the quota can play in Chinese cinemas as long as they also play in either IMAX or 3D. In the Chinese cinema markets, these formats have become a way for studios to bypass the quota and get more Hollywood fare into the lucrative Chinese market.

Giant screen and 3D are also seeing growth in the theme park and museum fields, which are still not subject to the government quotas. Ed Capelle, a giant screen industry veteran who currently serves as Vice President of K2 Communications, has been traveling to China for the past six years booking films with local museums, but his time in China goes back farther than that. He asserts that contrary to popular belief, the first American film to play in mainland China was not The Fugitive, but rather the giant screen film Grand Canyon: The Hidden Secrets, which Capelle produced while President of Destination Cinema, and which screened at the Iwerks theater in Tianjin. “We were in China months before The Fugitive,” he says.

According to Tammy Thurmon, Executive Director of the Giant Screen Cinema Association, “Ed was instrumental in getting the GSCA Asian Film Expo in Dongguan.” Held in January 2011, the event hosted over 150 representatives from numerous museums across Asia. Capelle shared his thoughts on why such an event was important in the Chinese market: “Unlike other markets where there are preview prints available, the cost and import restrictions make it too prohibitive. We send DVD’s in Mandarin to many exhibitors, but expos such as this provide a wonderful vehicle for a single viewing of a number of films.”

One of the attendees at the Asian Film Expo was William McQiu, a resident of Christchurch, NZ who is an import/export broker with China. After an introduction by a mutual friend to executives at MacGillivray Freeman Films, he added giant screen film distribution to his portfolio, later adding the nWave library as well.

McQiu is impressed with the quality of 1570 film, but he worries about the institutional theaters that have switched over to non-IMAX digitial projection systems. In recent months, a new product,called DMAX, was introduced by the China Film Group and the government-associated China Research Institute of Film Science and Technology, to directly compete against digital IMAX at a lower operating cost. McQui states “If a theater wants to go digital, they should also keep their film projector in the same booth. The quality is not the same and that is what the Chinese public is looking for – a quality presentation.”

McQiu points out that the huge growth in science museums and their accompanying IMAX theaters is the result of a national strategy to bring science and technology education into the community. Capelle adds that “When the Olympics took place in Beijing, that helped because suddenly the government wanted to showcase China to the world and it was putting millions of dollars into cultural institutions. Part of the money went to theaters at museums prior to the Olympics, and not just IMAX theaters. The big museums in China tend to have two or more different kinds of theaters – giant screen, dome, 3D, 4D, or simulator.”

One of those dome system providers is Sky-Skan, whose Definiti® series has been helping to raise standards of fulldome digital projection. The company landed in the record books in 2008, when the Beijing Planetarium opened as the first 8K planetarium in the world. Two years later, in the shadow of the “Bubble” theater at City of Dreams, Sky-Skan installed another 8K planetarium system at the Macao Science Center. This new Sky-Skan system projects in 3D, and is featured in the Guinness Book of World Records as the highest resolution 3D planetarium.

One of the newest Sky-Skan installations is at Dunhuang, a World Heritage Site in the Gobi Desert where relics trace the history of the Silk Road and the interactions between the ancient cultures of China, India, Persia, Greece, Rome, and Central Asia. Because of the fragility of the artifacts and the caves where they were found, access is limited. The Dunhuang Academy is digitizing the collection, which will be displayed on two domes and in dual flat-screen preshow theaters for visitors to experience.

A Sky-Skan system was part of the experience that attracted large crowds at the Saudi Arabia Pavilion at Shanghai Expo 2010. A 35 million pixel image projected images of Saudi Arabia, below and around the visitors, on a 17,000 square foot curved screen.

“Shanghai Expo was certainly an influence on Chinese theme parks,” says Brent Young, a Principal with Super 78 Studios. “So were the big casinos in Macau and Singapore. But most important were the Disney and Universal parks that opened in Asia. They wanted to give their guests that kind of experience and as a result, regional Chinese parks tend to be much more media-based than American parks.

Young has written and directed two flying attractions for the Happy Valley chain in China. In Shanghai, “Flight of the Dragon” takes riders on a journey above China, while at Happy Valley Shenzhen, it’s a flight above US landmarks in “Flying America.” Both theaters feature a Huss ride system made up of three arms. Each arm contains three sets of ten seats, one above the other. Hanging in the air, visitors are given the sensation of flying. Four Christie Roadster HD18K’s are combined at each park to create a single image on an 80’ curved screen from Spitz.

Young says, “Generally, expectation at the upper levels of management is that they want something world class. They’re always pointing at Disney and Universal attractions as the benchmarks. But the reality is that budgets don’t always align with the expectations. A significant part of the job is educating the client and managing the expectations, while also endeavoring to exceed projects done in the past with the available resources.”

Another Super 78 film that has played well in China is Dora and Diego’s 4D Adventure, which plays worldwide in Simex-Iwerks 4D theaters. According to Mike Frueh, this is the type of entertainment both Chinese and world audiences are looking for. “Our clients want Hollywood. Their guests want Hollywood. And they know when it’s not.” Although Simex-Iwerks still provides services in the giant screen and simulator field, the current trend is for family entertainment.

One of the best performing Iwerks 3D/4D experiences in China has been Yogi Bear. With attraction alliances with Fox (Ice Age) and Warner Bros (Polar Express, Happy Feet, Wizard of Oz), the company is strategically placed to take advantage of an increasing family-friendly library of key Hollywood licenses.

The next frontier in China is making immersive cinema experiences more accessible in a country of over a billion people where most may never have an opportunity to visit a venue with a giant screen, planetarium, or 3D theater.

Last year, IMAX tested an inflatable portable theater that could be taken for special engagements to smaller markets in China where it would not be feasible to build a permanent IMAX theater. In North America, Simex-Iwerks converted its entire fleet of mobile simulators into mobile 4D theaters. Frueh says, “We were able to increase the seating from 18 to 50, and it became a family-based experience in the process.” In 2013, Iwerks will introduce its next generation of portable theater, something Frueh says he is certainly considering for the Chinese market.

For fulldome digital, according to Marcus Weddle, Marketing Director for Sky-Skan, the trend will not be to go larger, but smaller. “There will be an explosion in the small dome market. There are hundreds of high schools around China that have planetariums, but the kids are unable to have the kinds of experiences as in the big cities. By digitizing these small domes, it opens them up for travels to places other than space and it excites them in science and technology in a way their existing planetarium star projectors might not have been able to.”

From one giant screen dome in 1992 to hundreds of digital domes two decades later, waiting 20 years for a projector is no longer an option. • • •

Joe Kleimanhttp://wwww.themedreality.com
Raised in San Diego on theme parks, zoos, and IMAX films, Joe Kleiman would expand his childhood loves into two decades as a projectionist and theater director within the giant screen industry. In addition to his work in commercial and museum operations, Joe has volunteered his time to animal husbandry at leading facilities in California and Texas and has played a leading management role for a number of performing arts companies. Joe has been News Editor and contributing author to InPark Magazine since 2011. HIs writing has also appeared in Sound & Communications, LF Examiner, Jim Hill Media, and MiceChat. His blog, ThemedReality.com takes an unconventional look at the attractions industry. Follow on twitter @ThemesRenewed Joe lives in Sacramento, California with his fiancé, two dogs, and a ghost.
Share
Facebook
Twitter
Linkedin
Email
Print
WhatsApp
Pinterest
ReddIt
Tumblr
Previous articleMaking Mammoth
Next articleDemand in Design