The annual Thea Awards organized by the Themed Entertainment Association (TEA) recognize excellence in the creation of compelling experiences and places. The Theas Nominating Committee itself is a veritable who’s who of attractions industry legends, including the likes of Marty Sklar, Phil Hettema, Kim Irvine, Joe Rohde, Bob Rogers and Robert Ward (See IPM’s interviews with Marty Sklar, Phil Hettema and Robert Ward). Every year, this committee sits down to review something like 150 nominations and extract from that a slate of award recipients. Given that TEA represents an industry that is increasingly international in scope, a concerted effort was made to encourage nominations from all corners of the world and the 2014 slate of 13 recipients is very well balanced in that regard, with 4 from North America, 4 from Europe and 4 from Asia – plus the lifetime achiever, Garner Holt, who we are shining a spotlight on here. 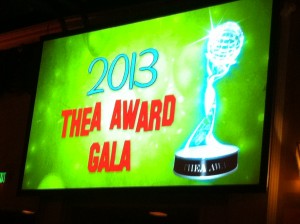 Representatives from the awarded projects will be streaming into Anaheim from far and wide for the 2014 Thea Awards Gala at the Disneyland Hotel on the evening of April 5. This black-tie dinner event gets better every year, and TEA tells us that the seats sell out more quickly every year as well. The awards ceremony is sure to have surprises, notable appearances and theatrics reflecting the awardees. (See InPark photos from past Thea Awards here.) The Gala is the culminating event of TEA’s annual business Summit (April 3-4), a 2-day event that consists of a limited-attendance, executive peer session on the first day, and an open-attendance, Thea Awards Case Studies review the second day. TEA’s NextGen membership is increasingly active and visible at Case Studies Day and the Gala. It’s always a great shmooze and learning event for all.

More information can be found at the official Thea Awards & Summit blog.

This biography of Garner Holt was provided by TEA:

As a child, Garner Holt was so amazed by a Wonderful World of Disney episode of the Haunted Mansion, that he decided he would create animatronics for a living. To make a long story short, he now makes amazing animatronics, parade floats, and other fantastic scenery and theming elements. Do you like the new Little Mermaid attraction at Disney California Adventure? Haunted Mansion Holiday? Did you like the floats for Walt Disney’s Parade of Dreams for the 50th Anniversary? Do you like everything that moves when you hit it on Buzz Lightyear Astro Blasters? That’s Garner Holt.

Here’s the twist–Garner has never been an Imagineer. Nor has he ever been an official Disney Cast Member. He’s what you call an outside contractor. But as he so successful at producing work that meets Disney’s rigorous quality that he has become a key contractor for Disney, essentially part of the Disney team. And with that, he gets to do some of the most amazing and fun projects–not just for Disney but for many other parks, restaurants, and exhibits.

Of course that didn’t happen overnight. Let’s back up several decades to when Garner was 18. He applied to Disney’s MAPO division where all of the mechanical animation was then manufactured. His portfolio showed animated figures that he had been building since age 12, but was told “Disney has all the professional animation builders it needs.” Broken-hearted, Garner expanded his small operation over the years, building animations and shows for clients worldwide. Garner Holt Productions is now the world’s largest animation show manufacturing operation. And all this by a youngster who turned down his parents’ offer of free college tuition just so he could proceed with his own dream.

In 2010, Judith Rubin attended an open house at Garner Holt Productions and wrote this report:

The open house was held in connection with the Themed Entertainment Association. From the podium Garner Holt spoke about various projects where GHP has applied state-of-the-art animatronics, ranging from Chuck E Cheese characters to dark ride figures for Universal Studios and other major theme park operators, to military training environments, educational touring exhibits for museums and zoos and of course, the cradle of animatronic civilization: haunted houses.

Plenty of Garner Holt employees (several in costume) were on hand to talk about their work as open house attendees toured the company to observe the workings of the very specialized and complex design and fabrication processes by which animatronics are brought to seeming life. There were character heads and body parts everywhere… It was clear that the employees relish the creative opportunities and challenges they find there and are engrossed in and proud of their work. Each project presents a new set of conditions to solve in design, execution and installation and Holt himself continues to take a hands-on creative role alongside his staff. “There’s a lot of talent in this company,” says Holt. “There are a lot of dreamers and artists who have found it is a place to collaborate with others. In their off hours, they’re back there building all kinds of neat stuff, and that feeds back 100% into their work for the company. It’s nice to see all their gears turning.” 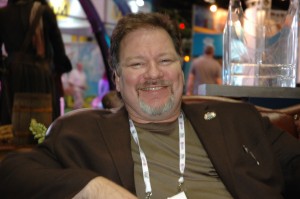