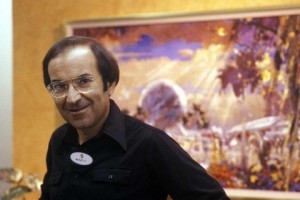 The life and career of Marty Sklar are so rich and far reaching in scope that a proper introduction to the former Imagineer would require a book.  And such a book, Dream It! Do It!: My Half Century Creating Disney’s Magic Kingdoms, will hit shelves August 13 (presales now available at Amazon).  Sklar started at Disneyland in 1955, where he created The Disneyland News, an in-park newspaper, and wrote most of the park’s marketing materials. In 2006, he transitioned from being Vice Chairman and Principal Creative Executive of Walt Disney Imagineering to become its International Ambassador, a position he retired from in 2009, after 54 years with the company.

Between the starting point at Disneyland’s opening year and his retirement were many adventures and life experiences.  But we leave it to the book to continue on that journey – a journey has made Sklar one of only two people to have been awarded the esteemed Lifetime Achievement Award from the Themed Entertainment Association, an IAAPA Hall of Fame inductee, and a Disney Legend.

Retirement has not kept Sklar down.  He remains busy in themed entertainment design as the head of Marty Sklar Creative, a TEA member.  At a presentation last year at the Walt Disney Family Museum, another Disney Legend, Bob Gurr, spoke about witnessing Sklar working on a recent project.  He called it a “wild night of charrette and martinis at Marty’s house.”

1. How have changes in technology affected the creative design process?

Technology in general, and new technologies in particular, are great enablers and change-makers in the theme entertainment business. However, at Disney, we are a story-driven creative organization, and Imagineers always start by striving to create a great story-experience. It’s rare that a new technology comes along that drives the creation of an attraction. One exception that comes to mind is the flight simulator development that enabled us to work with George Lucas in creating the first Star Tours adventure at Disneyland. Now that I’m retired, I confess to some envy at the availability of new technical developments in sight, sound and even smell that talented storytellers and production teams have at their disposal.


2. Over the years, Imagineering has worked on a number of non-theme park projects around the world, ranging from Circlevision films at Canada’s Expo 67 and EXPO 86, to an airport transit system in Houston and a bowling alley in Denver.  Do you have a favorite non-Disney project that Imagineering developed?

This may surprise you, but my personal favorite was the creation of the new lobby area a few years ago for Children’s Hospital in Los Angeles. Imagineering was so busy that I was only able to do this with volunteers, as a “Lunchtime Project” – Disney bought the munchies and we worked on our own time for weeks coming up with the ideas and generating the designs – mostly by John Horny and Zofia Kostyrko. We created a family/kid friendly environment where parents and brothers and sisters could feel welcome when they visited their children/brothers/sisters in the hospital. Lexington did a great job executing our concepts.


3. Would you please share some of your memories of working with 2013 Disney Legends Collin Campbell and Tony Baxter?

It’s wonderful that Collin Campbell and Tony Baxter are being honored this year as Disney Legends! I have a vivid memory of watching Collin take an iron chain and bash it against the structure to get the look we wanted for a building in the U.K. pavilion at Epcot – the contractor was frantic that he would be blamed and forced to do it over, but we got “the look” we wanted! Collin’s field work was extraordinary. He also painted a key piece which helped Bob Weis communicate our concept for the Disney-MGM Studios (now Disney’s Hollywood Studios).

Tony, of course, is one of the great achievers in our industry – think Big Thunder Mountain Railroad, Splash Mountain, Indiana Jones, Journey Into Imagination, Finding Nemo Submarine Voyage, etc. etc. The park Tony quarterbacked from day one, Disneyland Paris, is a design gem. One thing I always appreciated about Tony was his mentorship of young talent; he never forgot how Disney Legends like Claude Coats took him under their wing when he was just getting started.

4.What lessons did you learn from working with Michael Eisner and Frank Wells?

In my book (Dream It! Do It! My Half-Century Creating Disney’s Magic Kingdoms – published by Disney Editions) I tell a lot of stories about working with Michael Eisner and Frank Wells. Perhaps the biggest lesson I learned from them was about partnership – that two great executives with very different skills added up to much more than double your pleasure when it came to running a company. Of course, those of us who worked with Walt and Roy O. Disney had that lesson at Disney long before Michael and Frank. My partnership with Mickey Steinberg in running Imagineering for about five years was the best I experienced – and I see that kind of partnership now between Craig Russell and Bruce Vaughn at Imagineering. I used one of my favorites Michael Eisner quotes in my book: “This is so large and impractical – that’s what appeals to me!”


5. Are there any memoirs that influenced your approach to writing Dream It! Do It! My Half Century Creating Disney’s Magic Kingdoms?

I’m always amused at the contrast in my home between my wife, Leah, and me when it comes to reading materials – she reads nothing but fiction, and I read mostly biographies. I’m currently reading Walter Isaacson’s biography of Albert Einstein, and I just finished one about the baseball DiMaggio clan, and the great tennis champion, Jimmy Connors. I can’t say any one style has influenced my writing, but I’m a great admirer of Isaacson’s work – the Steve Jobs biography, and especially his compilation called American Sketches. I think I have developed my own style through the years, especially early on when I wrote practically everything that came out about the Disney parks, and many things for Walt Disney’s signature until he passed away. After all those years running a creative organization (which I loved!) I’m truly enjoying the opportunity to use my writing skills again. You haven’t seen the last of my efforts with “book number one!”

Joe Kleimanhttp://wwww.themedreality.com
Raised in San Diego on theme parks, zoos, and IMAX films, InPark's Senior Correspondent Joe Kleiman would expand his childhood loves into two decades as a projectionist and theater director within the giant screen industry. In addition to his work in commercial and museum operations, Joe has volunteered his time to animal husbandry at leading facilities in California and Texas and has played a leading management role for a number of performing arts companies. Joe previously served as News Editor and has remained a contributing author to InPark Magazine since 2011. HIs writing has also appeared in Sound & Communications, LF Examiner, Jim Hill Media, The Planetarian, Behind the Thrills, and MiceChat His blog, ThemedReality.com takes an unconventional look at the attractions industry. Follow on twitter @ThemesRenewed Joe lives in Sacramento, California with his wife, dog, and a ghost.
Share
Facebook
Twitter
Linkedin
Email
Print
WhatsApp
Pinterest
ReddIt
Tumblr
Previous articleMOSI Adds Human Organs to Exhibit as Comparisons to Deep Sea Life
Next articleAlcorn McBride’s CARBON 4K Presents 60fps Video Experience