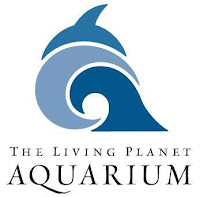 Sandy, UT, USA (December 4, 2012) /PRNewswire/ — The Living Planet Aquarium is shocking visitors with its Christmas display which uses an Electric eel to flash the lights on its tree.

A Christmas display in the ‘Journey To South America’ gallery is blinking by using the energy generated by an electric eel in a nearby tank. “We took the voltage produced by the eel via stainless steel electrodes and used it to power a sequencer,” said Terry Smith, Project Manager at Cache Valley Electric. “The sequencer takes the voltage the eel produces and operates circuitry that flashes the lights, fast or slow, based on the level of voltage he puts out,” said Smith. Each time the eel moves, the lights on the 5ft tall tree flash intermittently using 4 strands of holiday lights.

Electric eels live in the murky streams and ponds of the Amazon and Orinoco basins of South America. These famous freshwater predators get their name from the enormous electrical charge they can generate to stun prey and dissuade predators. Their bodies contain electric organs with about 6,000 specialized cells called electrocytes that store power like tiny batteries. When threatened or attacking prey, these cells will discharge simultaneously, emitting a burst of at least 600 volts which equals five times the power of a standard U.S. wall socket.

The aquarium in Sandy, just south of Salt Lake City, features the Electric eel as part of the permanent South American freshwater exhibit. “Visitors can visually and audibly experience the power of our Electric eel and get a real sense of how amazing this creature is,” said Angie Hyde, Director of Public Relations & Marketing. “We thought we’d put a festive twist on it for the holidays which has been a huge hit with our members and visitors.”

The Electric eel display is made possible by Bill Carnell, Terry Smith, Jim Laub and Jody Jenkins of Cache Valley Electric, and will be available to visitors through December 31, 2012.

Joe Kleimanhttp://wwww.themedreality.com
Raised in San Diego on theme parks, zoos, and IMAX films, Joe Kleiman would expand his childhood loves into two decades as a projectionist and theater director within the giant screen industry. In addition to his work in commercial and museum operations, Joe has volunteered his time to animal husbandry at leading facilities in California and Texas and has played a leading management role for a number of performing arts companies. Joe has been News Editor and contributing author to InPark Magazine since 2011. HIs writing has also appeared in Sound & Communications, LF Examiner, Jim Hill Media, and MiceChat. His blog, ThemedReality.com takes an unconventional look at the attractions industry. Follow on twitter @ThemesRenewed Joe lives in Sacramento, California with his fiancé, two dogs, and a ghost.
Share
Facebook
Twitter
Linkedin
Email
Print
WhatsApp
Pinterest
ReddIt
Tumblr
Previous articleCaesars Prepped to Turn Historic 33-Year Old Vegas Strip Hotel Into Boutique Property
Next articleChrysler Foundation Donates $50,000 Towards Opening of Michigan Science Center