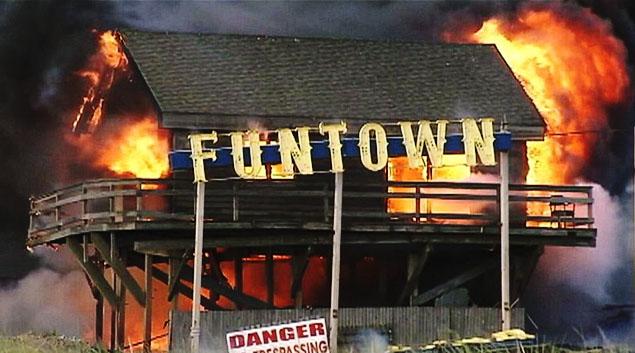 The boardwalk’s construction was completed on December 9, 1921, but its roots date back five years prior with the first discussions in city government and the introduction of the town’s first seaside amusement.  According to the book “Down on the Jersey Shore” by Russell Roberts and Rich Youmans (Rutgers University Press, 1993):

It was on January 7, 1916, that the matter of building a boardwalk was discussed during a Seaside Heights council meeting.  This might has been considered a bold step for a town that just seven years before had consisted of only three buildings, but clearly the time was right.  Within the previous few years the town had grown enormously, helped along by the opening on December 5, 1914 of the first bridge to span Baranegat Bay . . . This bridge made the Heights the closest beach resort to Philadelphia for those traveling by car, and across the bridge they came.

The foundation of the boardwalk had already been laid one year prior to that January 7 council meeting, when Philadelphian Joseph B. Vanderslice constructed a pavilion on the beach, the high point of which was a gasoline-powered merry-go-round.  This proved to be a failure.  However, in 1916 Frank H. Freeman, later to be mayor of Seaside Heights, took over the pavilion and installed an electrically powered carousel, beginning a long and successful career at the Heights.

The boardwalk has continued to grow over the years, adding numerous rides to its amusement operations, including some salvaged from closed Coney Island parks.  Currently two parks exist on the boardwalk, Casino Pier and Funtown Pier, along with a number of independently operated retail, restaurant, amusement, and bar operations.

The town has remained popular with families and young people for decades, with the annual population doubling from 35,000 to 60,000 as visitors stream in from New York, New Jersey, Pennsylvania, and other bordering states.  Between 2009 and 2012, MTV played the popular “Jersey Shore” television show filmed on the Seaside Heights boardwalk.  And while the town at first tried to distance itself from the production featuring rowdy, promiscuous youth, the Center for Governmental Research reported in 2012:

Seaside Heights pulled in $807,000 in parking facilities revenue in fiscal year 2007  (before the show went into production).  In FY 2010, the Seaside Heights budget reflected that more than $1.1 million was anticipated (the show’s first broadcast was in December 2009).  Actually realized in cash that year was $1.3 million, and the most recent FY 2011 budget shows anticipated revenues of $1.2 million.

From the $807,000 collected in 2007 to the $1.3 million collected in 2010, it can be said that Seaside Heights parking meters are now handling about 61% more of tourists’ and beachcombers’ pocket change. We can’t speak for other factors that come into play (weather, for instance; or the recession’s effect on what are now known as “staycations“).  But the Jersey Shore, with a viewership of 8.5 million and counting, has transformed Seaside Heights from just another summer beach destination in Jersey into a household word.

Last year, the town and boardwalk were devastated by tropical storm Sandy, which destroyed or damaged almost all of the boardwalk.  Casino Pier’s 52-foot high Star Jet rollercoaster sitting in the Atlantic Ocean, photos of which were seen worldwide, become an iconic image of the storm’s legacy.

Since Sandy, more than $20 million in federal, state, and local funds have been appropriated for rebuilding of the boardwalk.  Britain’s Prince Henry even paid a royal visit to the site on May 14, 2013.

Yesterday, tragedy hit again as, at 2:30 pm local time, fire broke out at he Kohr’s Ice Cream stand.  Five hours later, the fire had spread to a six block length of the boardwalk.  In all thirty-two businesses were destroyed, including most of the Funtown Amusement Pier, which was gearing for a 2014 reopening.

Firefighters were able to prevent the fire from spreading north by ripping apart a 25-foot portion of the boardwalk’s planks (much of it newly laid in anticipation of Harry’s visit) and filling the area with sand from adjacent beach dunes.  Among the businesses saved was Casino Pier, which posted this morning on its facebook page:

Our hearts go out to all of our neighbors and fellow business owners in Seaside Park and Seaside Heights during this difficult time. We thank all of the courageous fire fighters and first responders for putting up such a strong fight yesterday and today. Thoughts and prayers from Casino Pier.

Please note that our Casino Arcade and Pier Surf Shop IS OPEN today.
The Pier rides, Go Karts, Golf, Pier Grill and Midway Games will be open tomorrow at noon.

We hope to see you all then!

Following the destruction to the park by Sandy, Casino Pier hired Jack Rouse Associates to develop a master plan and programming services for its “rebirth.”  This plan is outlined in the upcoming issue of InPark Magazine, and it’s available now to read on InParkMagazine.com

Joe Kleimanhttp://wwww.themedreality.com
Raised in San Diego on theme parks, zoos, and IMAX films, InPark's Senior Correspondent Joe Kleiman would expand his childhood loves into two decades as a projectionist and theater director within the giant screen industry. In addition to his work in commercial and museum operations, Joe has volunteered his time to animal husbandry at leading facilities in California and Texas and has played a leading management role for a number of performing arts companies. Joe previously served as News Editor and has remained a contributing author to InPark Magazine since 2011. HIs writing has also appeared in Sound & Communications, LF Examiner, Jim Hill Media, The Planetarian, Behind the Thrills, and MiceChat His blog, ThemedReality.com takes an unconventional look at the attractions industry. Follow on twitter @ThemesRenewed Joe lives in Sacramento, California with his wife, dog, and a ghost.
Share
Facebook
Twitter
Linkedin
Email
Print
WhatsApp
Pinterest
ReddIt
Tumblr
Previous article
Qube Cinema Providing 4K 3D Solution for Digital Laser Projection Demo
Next article
A Moment of Silence for Dolby