Hollywood, CA, USA — Hollywood, California-based Gary Goddard and his company, The Goddard Group, world leaders in the concept, master planning, schematic design, and show design of mega resorts, casinos, retail destinations and theme parks on a global scale, have announced that construction has begun on their latest project, “Shenfu New Town,” and, specifically, on its monumental “Ring of Harmony,” the iconic symbol for that new city. Mr. Goddard made the announcement.

Construction on the new project, located between the cities of Shenyang and Fushun in China, is expected to take place in phases over the next decade. Shenfu New Town is an entirely new city, for which the Goddard Group provided the concept and master planning services for two square kilometers of the more than 10 square kilometer city. Goddard and his designers worked in close concert with the local government and development agencies on Shenfu New Town, which will be wrapped around two massive lakes, each of them shaped and designed by The Goddard Group. At the heart of the new city, overlooking these massive lakes, will be the “Ring of Harmony,” a 505-foot tall stainless steel ring that will serve as the new city’s iconic symbol. 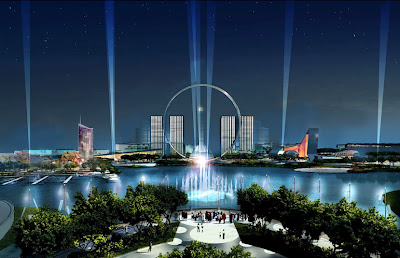 Shenfu New Town follows closely on the heels of the international success that has been enjoyed by the Goddard Group-designed “Galaxy Macau” Mega Resort and Casino in China. The $2-billion resort is the recent winner of the 2012 “World’s Best Casino / Integrated Resort of the Year” Award bestowed by the International Gaming Awards. In less than one year, the Galaxy World Macau venue has become a world class mega resort visited by millions of people from all over the world. According to Goddard and The Goddard Group, the same kind of drawing power enjoyed by the Galaxy Macau is expected for the dynamic “Ring of Harmony” at Shenfu New Town. 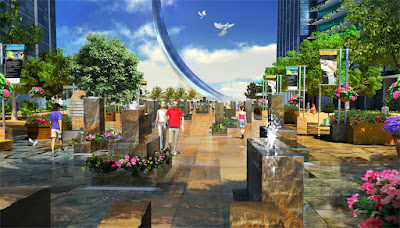 Mr. Goddard said, “When we were first approached about providing a master plan and vision for Shenfu New Town’s downtown urban core, I told our client that if they would like to see a city that was vibrant and artistic within a people-friendly environment, we could create that. And as we started to work toward that goal, I felt that this massive new town needed a visual ‘center’ to symbolize its place in China and in the world. I thought about the many iconic symbols throughout the world, and realized no one had really perfected the circle on a grand scale. So for this project, set against the lakes that we were designing, I felt that a perfect circle would represent the harmony of life in balance: the balance between man and nature, between land, water and sky, while also depicting the inner-connective nature of life itself.” 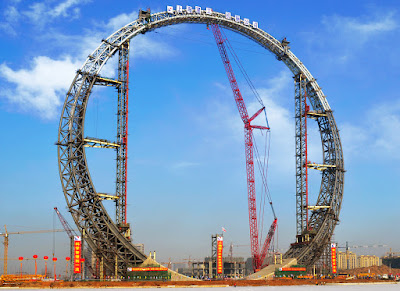 Goddard continues, “So we designed the ‘Ring of Harmony’ as a unifying symbol for Shenfu New Town – a place where people and nature live in harmony together. The city planners and city fathers were so taken with this idea, that they immediately embraced it, which allowed my team and I to quickly begin the schematic design. Within months, the city started construction. The large circle also inspired the graphic identity for this new city as well. Using the ‘Ring of Harmony’ as a defining graphic symbol, we developed the core graphic identity for the entire Shenful New Town as well.”

While the “Ring of Harmony” will be completed first, the Goddard Group’s master plan covers over two square kilometers (roughly 500 square acres) of urban design, including housing, retail, entertainment, civic buildings, parks, lakes and other community-based design elements. The total Shenfu New Town project is expected to be built out over the next four to five years.

ABOUT GARY GODDARD AND THE GODDARD GROUP
Today, Gary Goddard and his team are among the most sought after designers of mega resort and themed entertainment projects in the world. If you’ve ever been to New York’s Times Square, Las Vegas, Tokyo, Sydney, Cape Town, Jakarta, Hollywood, Shanghai or the Philippines, chances are you’ve personally experienced one of the themed entertainment attractions, hotels, resorts, aquariums, retail outlets or visitor centers designed and produced by Gary Goddard and The Goddard Group.

Since 1980, Gary Goddard has created many of the greatest attractions in the world, first through Gary Goddard Productions, which became Landmark Entertainment Group, and then after selling 50% of the company to Prince Alwaleed and Michael Jackson, leaving Landmark to form The Goddard Group in 2001. Specializing in concept, master planning, design, project management and media production services, The Goddard Group provides turn-key services for entertainment-based projects of every size and scope in America and throughout the world.

Goddard and his firm have grown to become one of the most successful independent entertainment design firms working in the industry today. For further information please see: www.garygoddard.com

Joe Kleimanhttp://wwww.themedreality.com
Raised in San Diego on theme parks, zoos, and IMAX films, Joe Kleiman would expand his childhood loves into two decades as a projectionist and theater director within the giant screen industry. In addition to his work in commercial and museum operations, Joe has volunteered his time to animal husbandry at leading facilities in California and Texas and has played a leading management role for a number of performing arts companies. Joe has been News Editor and contributing author to InPark Magazine since 2011. HIs writing has also appeared in Sound & Communications, LF Examiner, Jim Hill Media, and MiceChat. His blog, ThemedReality.com takes an unconventional look at the attractions industry. Follow on twitter @ThemesRenewed Joe lives in Sacramento, California with his fiancé, two dogs, and a ghost.
Share
Facebook
Twitter
Linkedin
Email
Print
WhatsApp
Pinterest
ReddIt
Tumblr
Previous articleViva la Musica Returns to Busch Gardens Tampa Bay
Next articleDiscovery Docked to 747 For Flight to Smithsonian