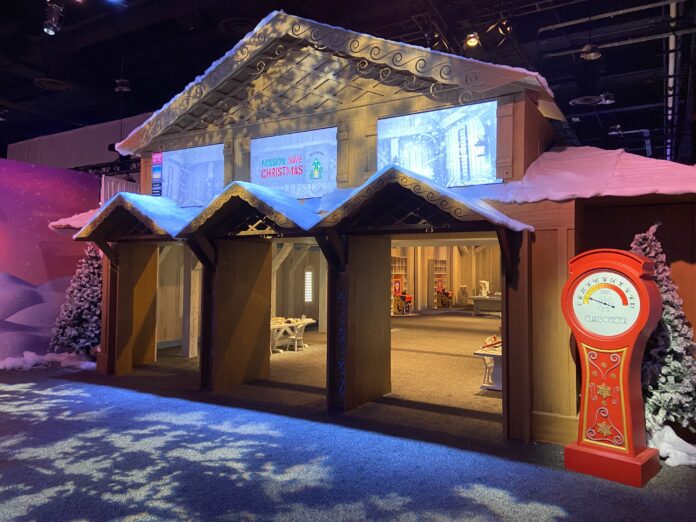 Christmas was coming, but the artisans responsible for carving two million pounds of ice for the Gaylord Hotels’ signature holiday shows were stuck in China, unable to leave home due to travel restrictions. The pandemic had ruined so many events, and it seemed that Gaylord’s annual festivities were at risk of becoming another disappointment to add to that list in 2021.

“We’ve worked on this concept. We want you to be our designers/fabricators/installers of this experience. It needs to happen at four properties across the country in less than 90 days,” was how Nickolaou’s phone conversation began with the fabrication specialist.

With the clock ticking, the Orlando-based Bungalow got to work building massive sets, a 16-foot-tall Mr. Narwhal, and an exact replica of Santa’s Kringle 3000 sleigh for Gaylord’s experience based on the holiday classic Elf. “Every aspect of it was over the top,” said Nickolaou, Senior Director for Special Events and Creative at Gaylord Hotels.

The appropriately titled “Mission: Save Christmas featuring Elf ” shows opened on time in Orlando, Dallas, Denver and Nashville. The 400,000 visitors were undoubtedly unaware of the tight deadlines and the COVID-19 challenges that lurked behind the scenes.

“We’re able to execute anything that we’re put up against within our industry,” said Bungalow Chief Operating Officer and co-owner Todd King.

What makes Bungalow unique is the variety of work it tackles under one roof, handling everything from foam to steel to 3D-printed plastic pieces. “That versatility has really been our claim to fame,” King said. “We own a lot of technology that allows us to expedite things and get down a path quicker and gives us a very broad range of the things that we can do.”

Roughly 50% of Bungalow’s work is fabricating custom items for themed or immersive environments. “Often, that is literally stuff that we’re building to 10- to 20-year life cycles that’s going into a theme park or retail space or something of that nature,” King said. The other side of the Bungalow portfolio is building custom scenery and staging for temporary use at corporate events. These items have a short life.

Every day, Bungalow straddles these two worlds with disparate needs, and according to King it’s rare that one firm can expertly handle both. “They’ll do one or the other. They’ll do theme park work and immersive environments, or they’ll do temporary, quick-turn stuff. And the reason why is that operations of those two are just complete opposites – how you design it, how you build it, how it gets engineered, how it gets installed, how it gets maintained,” King said.

A full-service shop in Orlando

Orlando being a primary hub of the themed entertainment industry, suppliers like Bungalow are positioned to readily serve clients in the region. Bungalow’s offices and production facilities are situated on 10 acres in an industrial area northwest of downtown. The company employs about 100 people and operates its own fleet of trucks to deliver finished products across the state. Even some of Bungalow’s own clients are surprised by the company’s vast footprint when they visit for the first time and see its 90,000-square-foot production space, King noted.

Co-owners Mark Gentry and Colin Murphy recently celebrated their 10th anniversary of founding the business in 2011. The company has grown steadily and revenue-wise, 2021 was one of its best years, according to King – a record it hopes to beat as it continues to expand its market share in attractions and immersive entertainment projects. Sometimes they are brought on the team directly by the operator and other times as a subcontractor.

“We really encompass all of the disciplines,” said Marketing Director Lauren Hatfield-Day. Bungalow’s vast shop was a bustle of activity on a recent morning as she toured us through the facility and showed off the warehouse spaces organized by specialty.

The full carpentry shop builds simple Hollywood flats for theater, up to finished laminate work that might be used in retail or broadcasting. A full metal shop handles ornate metal sculpture, all the way up to steel and aluminum structural fabrication. “We have the highest certifications possible in structural steel and aluminum,” King said.

The shop’s full electrical department does anything from basic lighting to automation and programming. The fiberglass department handles bodywork on pieces to get them paint-ready as well as casting, mold-making and building large items such as boats.

Bungalow’s automotive paint shop has a full-size booth able to accommodate a full-size bus. Workers airbrush props or characters to give them a lifelike finish. The full scenic department includes the skill to paint realistic bricks or design other textures.

The sculpture department handles the items coming off the CNC routers to add crisp details. “If we’re going to carve something out of foam and use that as the end piece, we’ll hard-coat it by spraying on a polyurea substance,” King said.

When work is ready to go out the door, Bungalow also has its own assembly team. “We have installers somewhere in the country pretty much any day of the week, throughout the course of the year,” King said.

To meet clients’ needs, Bungalow is often innovating and testing the limits.

One project that stands out is when Bungalow built three giant performance stages for a theme park show that also incorporated parade float technology. The mobile performance stages had screens and stairs built into the chassis that pulled out to be used during the daily shows before it was put away every night.

“Getting all the mechanics and engineering was a huge feat,” King said. “Bungalow will do whatever it takes to get a project done right. We do what we do because there’s a magic to this business that we love.”

Those tools include two flatbed CNC routers and a Kuka robotic arm that cuts large objects in 3D. Bungalow uses the Kuka for cutting foam and routing wood with the device that had once been used as a welding arm on the General Motors assembly line until the technology was repurposed and reprogrammed to do sculpting. “The Kuka is very broad in its application. With a Kuka arm, with the right attachment, you can cut stone,” King said. “Its capabilities are endless in that realm.”

Hatfield-Day’s tour leads past iconic pop-culture creations scattered throughout the building – foam busts and plastic figurines, plus various themed accessories. These industry pros are also fans at heart. Building something special lets them practice their skills and test the equipment.

King encourages employees to conduct research and development (R&D) regularly during lull periods. “It keeps us competitive,” said King. R&D could mean testing new lighting capabilities, experimenting on 3D printers or testing new approaches to any number of processes. “A lot of R&D is pushing our equipment to its limits. What can this machine really do? What can these programs really do? What will happen if we get a different tool?” King said.

To make the company more transparent and get employee buy-in, Bungalow regularly holds project kickoff meetings so workers can give feedback on the construction process. “By doing that, everyone’s pretty much on the same page from day one. They’re getting to collaborate. They’re getting to have a say on how that project goes and how those things get built,” King said.

“You create this work environment that’s very open, and you’re just trying to get down the path most efficiently. And I think that’s where we really thrive.”

Some workers never get to touch the finished product since they are involved in early steps of the process. That’s why King said he prioritizes communicating with employees to make them feel connected and makes sure to show them photographs of the end result. Their pride in a job well done is the other side of fulfilling the client’s vision for a great guest experience.

“They’re blown away,” King said. “They’re like, Oh, my gosh, I never realized those things that I was working on eventually turned into that.’”

To make an appointment to meet with Bungalow Scenic Studios, contact [email protected] bungalowscenic.com. The company will be at the 2022 IAAPA Expo in Orlando in November. • • •

Gabrielle Russon ([email protected] gmail.com) is a freelance journalist who lives in Orlando. She previously covered the business of theme parks for the Orlando Sentinel, earning several statewide and regional honors for her coverage over theme park injuries, the economic challenges facing theme park workers and the pandemic’s impact on the tourism industry. A Michigan native, she is a Michigan State University graduate and has worked at the Sarasota Herald-Tribune, the Toledo Blade, the Kalamazoo Gazette and the Elkhart Truth during her newspaper career. In her spare time, she loves visiting Orlando’s theme parks and running marathons.