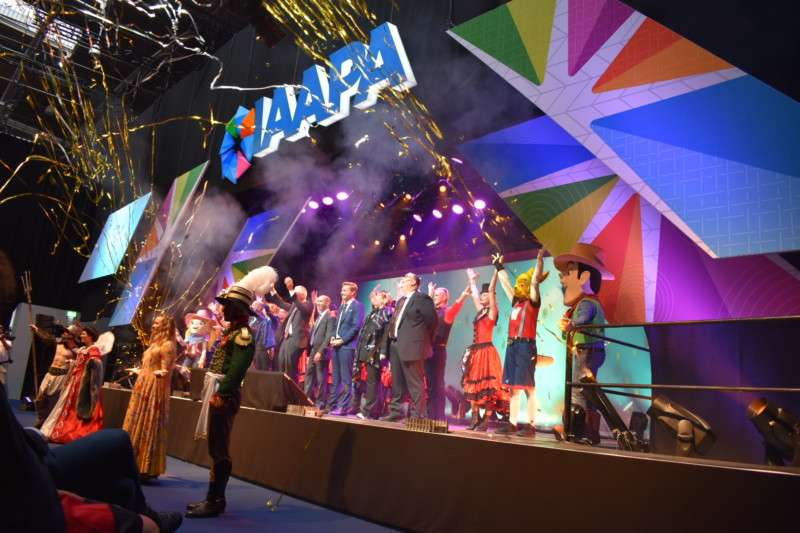 New partnerships and a focus on sustainability

“Do not forget to visit our parks and attractions while you are here in Paris. France has so much to offer,” said Agnès Pannier-Runacher, State Secretary, French Ministry of Economy and Finance, during the opening ceremony of IAAPA Expo Europe 2019.

Also during the opening ceremony, current IAAPA chair David Rosenberg of the Monterey Bay Aquarium talked about IAAPA’s initiatives in the arena of sustainability. It was a topic he feels passionate about and to which the IAAPA board dedicated a task force earlier this year as part of its five-year strategic planning.

The focus of the task force was to figure out not only how to integrate sustainability best practices into the IAAPA organization, but also how to make it accessible for IAAPA member companies. Immediate past chair Andreas Anderson headed the task force along with a team of concerned members. IAAPA referenced sustainability guides issued by the UN as well as information from leaders in sustainability within the industry to help craft their plans.

As a result of the task force’s work, IAAPA’s board recently voted to create a standing committee dedicated to addressing sustainability.

“The industry is asking for some direction on the issue of sustainability, in part because their visitors are demanding it,” said Rosenberg. “Now is the time for IAAPA to lead by example.”

One of the key points Rosenberg brings up is how sustainability and profitability can be synonymous. Disney’s solar farms and Six Flags parks that are already off the grid provide examples. Rosenberg’s facility, the Monterey Bay Aquarium, provides another. The aquarium decided to eliminate plastic water bottles from their food service location but found that customers simply left the property, bought bottled water at a nearby store and brought it back to the aquarium. As a result, Monterey Bay searched for a vendor that provided water in aluminum cans with screw-top lids (one thing consumers value about bottled water is the ability to completely close the top). Their partnership with this vendor facilitated that vendor’s growth within the US, allowing the vendor to produce at a lower cost; as a result the aquarium’s margins on the water also improved.

“People, particularly from younger generations, are expecting sustainability from locations they visit and they are willing to pay more for it,” says Rosenberg.

In terms of solutions, IAAPA has already created a sustainability self-assessment tool for attractions to use to determine areas of improvement. The association is also working with the exposition services company Freeman on sustainable practices for the IAAPA Expo. “Finding partners like Freeman that already have aggressive plans in place around this issue is one way to make a difference quickly,” says Rosenberg. At the new IAAPA global headquarters in Orlando the campus includes a solar farm that provides partial power generation for the building. Car charging stations are also available to encourage IAAPA staff to use electric vehicles.

One area in which the industry has opportunity for growth is waste generation. Rosenberg looks to eco-tourism parks for potential solutions. He recalls one park in Guatemala that is located far from the central city and prides itself on being self-sustaining. Waste is composted on site in giant bins and used as fertilizer.

“Collectively, the attractions industry is in a great position to effect change on a daily basis and impact our guest experience with an eye towards sustainability,” says Rosenberg.

During IAAPA Expo 2019, Rosenberg will become IAAPA’s immediate past chairman as Amanda Thompson assumes the leadership position. You can read more about Amanda and her own commitment to conservation in InPark issue #80.

Updates were provided on Europa-Park’s new indoor waterpark, Rulantica in Rust, Germany. Scheduled to open November 28, 2019, construction is nearing completion and slide testing is taking place. Europa-Park President Michael Mack gave credit to the communities around Rust for their help and involvement in helping to create Rulantica.

Developments property-wide include the opening of Snorri Touren, a new dark ride being built in the Scandinavia portion of Europa-Park that helps tell the story of Rulantica’s mascot, Snorri (named after 12th century adventurer Snorri Sturrson).

Jora Vision helped design the attraction, which will take guests on a Snorri-guided tour of Rulantica artifacts in giant rubber boats. One innovative element to the attraction that Mack Rides developed is a track turntable that will rotate cars and send them into one of two small curved screen theaters. This will allow for an extended media scene without sacrificing throughput. The tracked ride will include 11 cars and have an expected capacity of 500 guests per hour. The ride soft-opened in October.

A book about Snorri was released in Germany in October of this year, with English and French versions debuting in 2020.

Attendance at the park’s newest hotel, Kronosar, which is connected to Rulantica, is meeting expectations for its first summer, even without the waterpark being open. Mack said they are looking into options to better connect Kronosar to EuropaPark. Currently buses shuttle guests back and forth but Mack indicated a monorail was the likely solution.

Finally, Europa-Park’s beloved Pirates of Batavia dark ride that was lost in a major fire in 2018 is being rebuilt. The new ride will maintain the feeling and concepts from the original but will be updated with the latest technology, including new animatronics manufactured in the United States.

Triotech’s strong presence in North America and Asia is complementary to CL Corp’s track record in Europe, according to Triotech founder Ernest Yale. That’s why the two have decided to engage in a long-term cooperation. Yale highlighted how Triotech’s core business is individual or small group attractions, while CL Corp specializes in larger simulators. Together they hope to develop new products and expand both companies’ footprints around the world.

“Our job is to explore new opportunities and partnerships, and we are especially happy to do it within the industry,” said Lauren Wood Weaver, marketing director at Sally Dark Rides. She was referring to Sally’s new partnership with animation studio Aardman. The two companies have launched two new dark ride concepts available for development.

The 25th anniversary of “Shaun the Sheep” naturally led to the creation of an eponymously named attraction. The new concept also ties into the December 2019 release of “A Shaun the Sheep Movie: Farmageddon.”

A new IP called “Adventure Through Time” serves as the basis for the second dark ride concept. In the story, a young girl becomes fascinated by an ancient statue in a museum. She notices a finger trap artifact that, when triggered, sends her (and riders) back in time visiting various times and places throughout history.

Una de Boer, Marketing Director of WhiteWater West, spoke enthusiastically about their expanded gamification line of waterslides. After the company’s success with Slideboarding, they are launching a new group-play version that de Boer likens to “Guitar Hero in a waterslide.” Up to six people in a single raft work together to hit colored buttons to match lights within the waterslide tube. In the first installation in China there is added incentive because if the team scores high enough jets push the ‘winning’ rafts over a modified ‘Manta’ wing and into a different more exciting path to the exit.

de Boer says the market will start to see more of these types of experiences on waterslides. “We are looking at more choose-your-own-adventure style rides, changing the paradigm from a passive sliding experience to one where the rider becomes the protagonist.”

Belgium-based Painting with Light celebrated their 20th anniversary during the Expo. The lighting design firm is well known for their architectural and attractions lighting [See “Kernels of Truth,” InPark issue #79], but also is expanding more into the museum and cultural attractions market.

Painting with Light also showcased their new REALITES system designed for theatrical applications that utilize both theatrical lighting and LED walls or projected backdrops. REALITES is a real-time lighting design tool that automatically balances brightness and matches lighting between theatrical lights and LED wall backgrounds/projections, in order to create more natural-looking scenes. Although designed to create a better experience for the viewer, it also makes the lighting designer’s job easier and simplifies workflow.

Joe Kleimanhttp://wwww.themedreality.com
Raised in San Diego on theme parks, zoos, and IMAX films, InPark's Senior Correspondent Joe Kleiman would expand his childhood loves into two decades as a projectionist and theater director within the giant screen industry. In addition to his work in commercial and museum operations, Joe has volunteered his time to animal husbandry at leading facilities in California and Texas and has played a leading management role for a number of performing arts companies. Joe previously served as News Editor and has remained a contributing author to InPark Magazine since 2011. HIs writing has also appeared in Sound & Communications, LF Examiner, Jim Hill Media, The Planetarian, Behind the Thrills, and MiceChat His blog, ThemedReality.com takes an unconventional look at the attractions industry. Follow on twitter @ThemesRenewed Joe lives in Sacramento, California with his wife, dog, and a ghost.
Share
Facebook
Twitter
Linkedin
Email
Print
WhatsApp
Pinterest
ReddIt
Tumblr
Previous articleThe Hettema Group: Elevator Pitch
Next articleGrupo Xcaret: Xavage Gardens