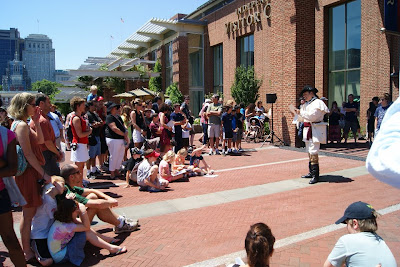 The spectacular five-tier cake will be decorated at the Visitor Center throughout the day prior to the celebration at 1 p.m. This will be the first time Termini Bros. will be off-site decorating one of their cakes in plain sight for passers-by to observe and get a sneak peak at the inner workings of what makes Termini Bros. a local icon and one of a kind. In addition to a custom designed cake, Termini Bros. will also give-away 2,500 cupcakes!

As if you were at Termini’s main location in South Philadelphia, they will bring the same exceptional customer service and signature Termini Bros. experience at the Visitor Center on July 4th in the heart ofPhiladelphia’s historic district. For more information and event updates, check out the event listing on Facebook.

Additional Visitor Center and INHP activities include:
A dramatic Reading of the Declaration of Independence will take place on Independence Mall next to the Visitor Center on June 30, July 1 and July 4 at 11 a.m. and 1 p.m. The reading will be performed by costumed performers and re-enactors with a fife and drum accompaniment.

A park ranger-led walking tour, Stories from the Past, will take place every day during Freedom Week from 10:30-11:30 a.m. Join a park ranger for a walking tour and hear about the people, both famous and forgotten, who played a role in establishing Philadelphia as the preeminent city of 18th century America. This walking tour starts at the Signers’ Garden on the corner of 5th and Chestnut Streets.

More Fourth of July Events
Wawa Welcome America! is also hosting events on Independence Mall throughout the week and on July 4:

The celebration continues on Independence Mall after July 4:

Free Concert featuring Payton Taylor at Crosswalk Cafe (July 7, 1–3 p.m.)
Crosswalk Cafe, located on Independence Mall across from the Visitor Center, is excited to host country singer Payton Taylor for a free concert on July 7 at 1:00 p.m. Taylor is a Southern New Jersey native who has been gaining national attention through multiple TV appearances, newspaper and magazine interviews, and online music retailers. This summer, she is touring and has appeared at “CMA Fest” inNashville, TN. She will be appearing at other festivals such as “Summerfest” in Milwaukee, WI, and “Country on the Beach” in Key West, FL.


The Independence Visitor Center Corporation is a Pennsylvania non-profit, 501(c)3 organization which operates in cooperation with the efforts of the National Park Service, the Greater Philadelphia Tourism Marketing Corporation, Philadelphia Convention and Visitors Bureau, the City of Philadelphia and the Commonwealth of Pennsylvania.


A unit of the National Park Service, Independence National Historical Park was created by an Act of Congress on June 28, 1948. Accredited by the American Association of Museums, Independence NHP covers almost 54 acres in Philadelphia’s Old City, and includes Independence Hall, the Liberty Bell, Congress Hall, Franklin Court, and other historic buildings associated with the founding of the United States. The park is open from 9:00 am daily with the exception of Christmas day. A visit to Independence National Historical Park should start at the Independence Visitor Center, located at 6th and Market Streets. Here, visitors can pick up a park brochure, park map, and the free, timed tickets required for Independence Hall. For more information visit the park’s website, http://www.nps.gov/inde or follow us at twitter.com/independencenhp or facebook.com/independencenhp.

Joe Kleimanhttp://wwww.themedreality.com
Raised in San Diego on theme parks, zoos, and IMAX films, InPark's Senior Correspondent Joe Kleiman would expand his childhood loves into two decades as a projectionist and theater director within the giant screen industry. In addition to his work in commercial and museum operations, Joe has volunteered his time to animal husbandry at leading facilities in California and Texas and has played a leading management role for a number of performing arts companies. Joe previously served as News Editor and has remained a contributing author to InPark Magazine since 2011. HIs writing has also appeared in Sound & Communications, LF Examiner, Jim Hill Media, The Planetarian, Behind the Thrills, and MiceChat His blog, ThemedReality.com takes an unconventional look at the attractions industry. Follow on twitter @ThemesRenewed Joe lives in Sacramento, California with his wife, dog, and a ghost.
Share
Facebook
Twitter
Linkedin
Email
Print
WhatsApp
Pinterest
ReddIt
Tumblr
Previous articleCelebrate the Fourth at SeaWorld and Busch Gardens
Next articleNow Open at Discovery Cove: A Fresh Approach to Animal Encounters