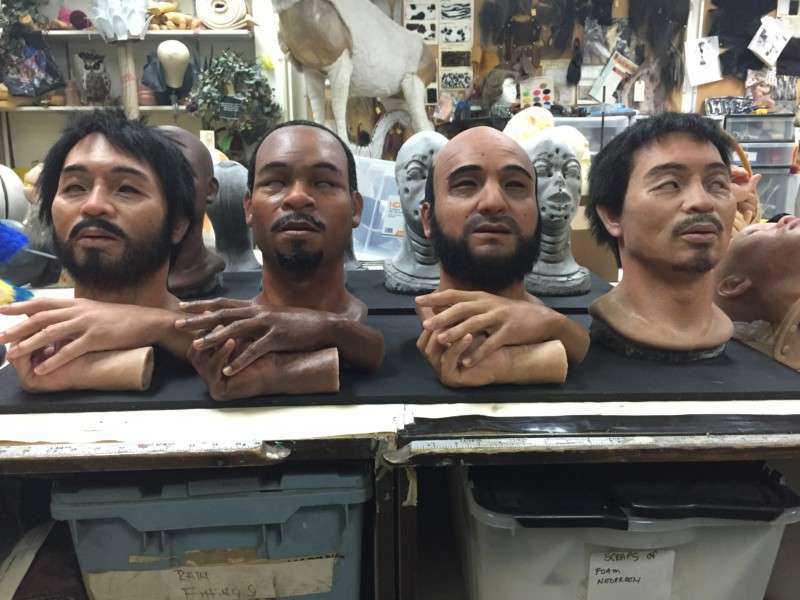 Expressive animatronics are making faces at the future

Animatronics are expressive, caricatured collections of plastic and metal. Since their theme park beginnings at Disneyland in the mid-1960s, animatronics (in the modern sense, quite a ways from old-school automata) have sought to deliver performances of expressive immediacy, whether from songbirds or pirates or bearded presidents. Walt Disney, in his role of philosophical and fundraising father of animatronics, recognized that the new technology was merely the extension of the animated shorts and full-length films he pioneered and perfected decades before. “Our whole past has been in the world of making things move,” Disney said. “From a drawing through all kinds of little props and things. Now we’re making these human figures, dimensional human figures move, making animals move, making anything move through the use of electronics. It’s a dimensional thing. It’s a new door.”

Mirroring the growing sophistication of animated films, animatronics have likewise always been an exercise in devising realism. Now, as part of the 40th anniversary celebration of our company, Garner Holt Productions, Inc., (GHP – considered the world’s largest animatronics builder) has introduced what we believe is the most expressive and realistic animatronic face in history. The new creation is part of GHP’s “Living Faces of History” series of animatronic characters.

The GHP “Living Faces” are exceptionally lifelike figures representing politicians, national and social heroes, celebrities and more using groundbreaking animatronics technologies. The first in the series is an animatronic bust of Abraham Lincoln. It’s company founder Garner L. Holt’s way of honoring the pioneering Lincoln animatronic first unveiled at Disneyland in 1965. “The Lincoln show at Disneyland was such a huge influence on me as a child and in founding my company,” said Holt. “I thought having our first highly-expressive animated head in his persona was a neat way to pay tribute to that.” The figure was shown in a preview form at the 2017 ComicCon in San Diego, and officially unveiled at GHP’s 40th anniversary open house in July 2017. It drew attention from leading online tech sites such as Gizmodo and appeared twice on “The Conan O’Brien Show.”

Among the figure’s audience at the open house was Disney Legend and renowned former Disney Imagineer Bob Gurr (who designed the mechanical body frame for the original Lincoln figure for Disney’s Illinois State pavilion show at the 1964 New York World’s Fair). Gurr spoke enthusiastically about GHP’s new Lincoln, saying: “I’m still flabbergasted with what I saw the Lincoln face do. Now you’re in a position to do the finest possible face when a client really wants the absolute best. Having watched the facial animation progression from Wathel [Roger]’s first efforts in 1955, through Jack Gladish’s work, then the 1964 Lincoln [through today], I’m probably the sole witness to all of it. Flabbergasted indeed!”

The new figure that so enthralled Gurr contains 45 individual functions in the face alone. GHP first implemented this sort of work in its projects for the US Marine Corps in the Infantry Immersion Trainer at Camp Pendleton near Oceanside, CA. There, a series of animatronic townspeople populate the immersive training environment, some friendly shopkeepers, others hostile combatants. “An effective way to illustrate an animatronic character’s scripted intentions or whether they are friendly or hostile is through changing the figure’s facial expression,” said Holt. “In this case, our figures could scowl or raise their eyebrows and smile or frown, all accomplished mechanically beneath the animatronics’ silicone face masks. It’s a subtle yet effective way to forewarn Marines that the ‘townspeople’ they are encountering may be getting ready to attack.”

The animatronic Lincoln bust and GHP’s figures for the military trace their origins to a larger, long-term project also currently in development. The “Project Yeti” initiative focuses on the creation of a seven-foot-tall animatronic yeti capable of more than 130 individual motions, more than thirty of which are in the figure’s face. “The Yeti’s hands are so articulated that they can be programmed to communicate with the hearing impaired using American Sign Language,” Holt said. The figure also employs a GHP-created visual/mechanical interface that allows the figure to track individuals in an audience, lock onto faces, follow specific faces, colors, or images (such as logos or other insignia), and cross-reference what it sees with an index of faces and other images so that the character can “recognize” individuals or specific insignia. Together, the figure not only looks and moves in an exceptionally lifelike way, but can also behave – using this form of artificial intelligence (AI)—in unique and non-linear ways.

In the same way, the GHP Expressive Head Project takes the things learned over the past decade or so with the Yeti to the next level. The Yeti’s head is over 24 inches tall, and most of its motions are accomplished with traditional linear pneumatic actuators. According to Holt, “At the time it was developed, miniature aircraft or industrial-quality servo-motors were not available at a level and price that made sense for this type of application.” Now, GHP’s designers can fit more functions (almost twice as many) than there were in the Yeti’s face into the considerably smaller footprint of the Lincoln character. These servo-motors are quite different from the traditional hobby servos used in movie animatronics or by the many expressive “robotic” heads being developed by universities and hobbyists.

The GHP Expressive Head’s proprietary silicone skin mask is an innovation, too: it attaches to the mechanical parts of the figure with dozens of unique flexible magnetic grippers that allow a balance of robust strength and compliant motion. In fact, the entire skin can be removed and replaced in less than two minutes and requires no tools. The skin is so malleable it can replicate wrinkling around the eyes, crinkling the nose, and a variety of strikingly lifelike creases that appear and disappear as the face moves from expression to expression. Crucially, it’s been thoroughly tested to prove it’s highly durable for theme park use.

The very first Lincoln figure at the 1964 New York World’s Fair had a few facial expression-related functions: it could raise its eyebrows, move its mouth and pinch its lips to make various speech motions, and even move its teeth to facilitate an “eff” sound. GHP is banking on the extension of this heritage, and the goal that animatronics pioneers and innovators share: to blur the line between what’s mechanical—metal, plastic, and motors—and what is real and alive. “I love research and development and the creative process behind bringing this sort of mechanized magic to life,” said Holt. “By pushing the state of animatronics further and further, we’re on the verge of something amazing. It’s got the potential to be bigger than animatronics. It’s the face of the future.” •

Joe Kleimanhttp://wwww.themedreality.com
Raised in San Diego on theme parks, zoos, and IMAX films, InPark's Senior Correspondent Joe Kleiman would expand his childhood loves into two decades as a projectionist and theater director within the giant screen industry. In addition to his work in commercial and museum operations, Joe has volunteered his time to animal husbandry at leading facilities in California and Texas and has played a leading management role for a number of performing arts companies. Joe previously served as News Editor and has remained a contributing author to InPark Magazine since 2011. HIs writing has also appeared in Sound & Communications, LF Examiner, Jim Hill Media, The Planetarian, Behind the Thrills, and MiceChat His blog, ThemedReality.com takes an unconventional look at the attractions industry. Follow on twitter @ThemesRenewed Joe lives in Sacramento, California with his wife, dog, and a ghost.
Share
Facebook
Twitter
Linkedin
Email
Print
WhatsApp
Pinterest
ReddIt
Tumblr
Previous articleHonoring the past, anticipating the future: JRA
Next articleSuper 78 turns twenty