Jackalope Junction offers “Gateway to the Grand Canyon” for its location 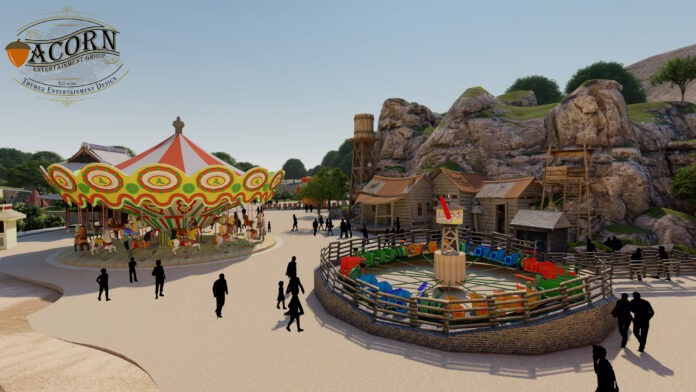 Acorn Entertainment Group is in escrow to build the Steampunk Western Storypark Jackalope Junction in the heart of Historic Williams, AZ — the “Gateway to the Grand Canyon” — on a 77-acre parcel, part of a future planned community development by Kansas Development LLC.

Teaming up with Acorn Entertainment Group to help with the story element is the award-winning studio collective AdventureLAB based in Denmark.

The story of Jackalope Junction centers around a small steampunk western town of the late 1800s — an old abandoned mining town that is restored by main character and hero, Jackalope Jim.

According to Greg Schumsky, creator of Jackalope Junction and founder of Acorn Entertainment Group, the story ties into two classic storytelling genres — from the adventures and tales of the Old West to the fantastical worlds of Jules Verne.

“There’s a certain element within the stories of the American Western genre as well as those of Jules Verne. Each touches on the innate human need for adventure and exploration into the unknown, and include true tales of perseverance, courage, sadness, loss and victory despite all the odds against the heroes,” said Schumsky.

The park plans include occupying an area around 10-12 acres and limited to 3,000 guests per day, utilizing a reservation system along with walk-ins. The town of Williams, AZ, averages 5 million visitors a year. Jackalope Junction will blend in as part of a massive 500-acre planned community themed to late 1880s architecture, which Acorn will be instrumental in the design and architecture, so the community feels like it’s historically part of the town of Williams and Jackalope Junction. Acorn Entertainment Group hopes that the State of Arizona Theme Park Tax District Bond will fund a majority of the build for the park.

The park will feature an unusual steampunk western town with retail, food and entertainment, including a robot-owned and -operated coffee house “Java Joe’s” to feature coffees from roaster Expedition Roasters known for their hand-crafted themed coffees. Jackalope Junction will also have a very unique “Back Country” with a turn-of-the-century county fair and rustic buildings that will host several original attractions based on characters and their stories. Also included in this area is a huge gem mine experience with a “Mine Cave Adventure Tour,” maze and hidden VIP eating establishment — the “Time Crystal Club” — or guests can go for an exciting ride above the treetops in one of Baron VonZümski’s SkyRunner Rocket Planes.

Outside the park, plans include a 5-acre event center; eventually, a 140-room themed hotel based on the famous Wawona in Yosemite; and a Live Farm Experience, working in conjunction with 4H and the Future Farmers of America, where high schoolers can give demos on raising small livestock as well as growing vegetable gardens. Guests to the farm can enjoy a farm-to-table menu in the small café.

Guests will also be able to have tours of the nearby Acorn Entertainment Studios to see firsthand how a theme park is designed and developed, watch animators working on our future animated television series or see artists and craftsmen working in our large fabrication facility on elements of new rides and attractions.

The event center plans to open by spring of 2023 along with the studios and the park to be opened by the summer of 2024. As an intellectual property, Acorn intends to bring the story of Jackalope Junction and its characters to children’s books, animated television and licensing for clothing and toys as well.