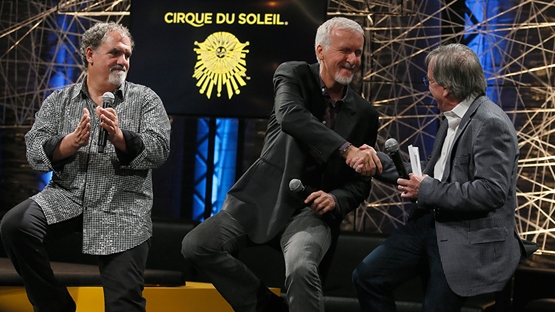 [quote]This will mark our second creative project with Jim and I believe it will be as stimulating for both our creative forces.” — Cirque du Soleil President and CEO Daniel Lamarre[/quote]

Montreal, QC, Canada (May 29, 2014) — Daniel Lamarre, President and CEO of Cirque du Soleil and Academy Award-winning filmmaker James Cameron announced a new partnership to develop an arena-touring show inspired by the world of Cameron’s history-making motion picture, AVATAR.   This “live experience” is expected to debut late 2015 for what will become a global touring schedule.

The announcement was made in Montreal during the international business C2MTL– Commerce + Creativity Conference.

The live production will feature the creative signature drive of Cirque du Soleil in association with Cameron’s and Jon Landau’s Lightstorm Entertainment. The show is expected to debut before the first of three upcoming AVATAR sequels, for which Cameron is currently in pre-production.  Twentieth Century Fox, which financed and distributed AVATAR, will bring the new films to theaters around the world and is also a partner on the live show.

“Our relationship with Jim Cameron began with my visit at his Avatar cutting room”, explained Daniel Lamarre.  “I am thrilled that almost 5 years later, Cirque du Soleil will be able to explore the very inspirational AVATAR realm for the live stage.”

“Over the years, I have discovered the extraordinary talents and imaginations of both the artists and the creative forces behind Cirque du Soleil,” said James Cameron. “I know we share the common goal of bringing audiences to another level of entertainment experiences.  I look forward to doing just that on this project.”

“Audiences around the globe have embraced AVATAR and we believe they will want to experience this amazing world in an entirely new way,” commented Kathy Franklin, President of Franchise Development at Lightstorm Entertainment.

“Avatar remains a phenomenon that continues to inspire people around the globe, and combining it with the live event ingenuity of Cirque du Soleil is a perfect synthesis of imagination and talent,” said Jim Gianopulos, Chairman and CEO, 20th Century Fox. “As Jim Cameron prepares to take us to even greater heights with three new AVATAR films, we’re thrilled with the innovative experience he’s developing in this groundbreaking agreement with Cirque de Soleil.”

Creative forces from Cirque du Soleil and Lightstorm Entertainment will meet and put in place a dedicated creative team, which will be announced at a later date.

Joe Kleimanhttp://wwww.themedreality.com
Raised in San Diego on theme parks, zoos, and IMAX films, InPark's Senior Correspondent Joe Kleiman would expand his childhood loves into two decades as a projectionist and theater director within the giant screen industry. In addition to his work in commercial and museum operations, Joe has volunteered his time to animal husbandry at leading facilities in California and Texas and has played a leading management role for a number of performing arts companies. Joe previously served as News Editor and has remained a contributing author to InPark Magazine since 2011. HIs writing has also appeared in Sound & Communications, LF Examiner, Jim Hill Media, The Planetarian, Behind the Thrills, and MiceChat His blog, ThemedReality.com takes an unconventional look at the attractions industry. Follow on twitter @ThemesRenewed Joe lives in Sacramento, California with his wife, dog, and a ghost.
Share
Facebook
Twitter
Linkedin
Email
Print
WhatsApp
Pinterest
ReddIt
Tumblr
Previous articleGarner Holt Productions Gifts Barker Bird to Walt Disney Family Museum as Centerpiece of New Audio-Animatronics Exhibit
Next articleUPDATED: Lionsgate Prepping “The Hunger Games” Museum Tour with Thinkwell, Names Jennifer Brown to Head Branded Attractions