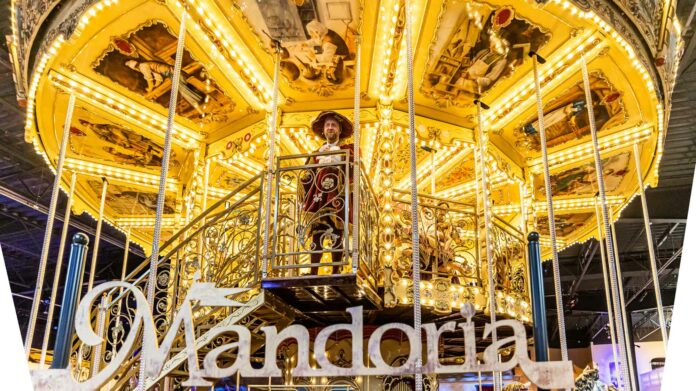 Mandoria, a year-round, massive indoor theme park, has opened in central Poland. Its designers relied on an original idea inspired by the times of the Renaissance. Attractions constitute an integral part of the created world, and visitors of Mandoria feel as if they entered a city from centuries ago.

“The entire park was styled as a 16th-century trading city,” explained Daniel Zieliński, Park Manager. “It has its inhabitants and its secrets. Attractions are part of this world, for many visitors the most important one. However, it should be emphasized that Mandoria is a family park where you can discover something new all the time. And what is important — visitors will experience it together because all attractions can be enjoyed by both children and adults.”

City of Adventures — entertainment for the whole family

The gates of Mandoria were opened to visitors on July 8 at 10 a.m. It was then that the key to the gates of the City of Adventures was officially handed over by Lady Estelle, Mandoria’s manager, to a girl, one of the park’s first visitors. The ticket costs PLN 99 (approximately US$25.75). Children shorter than 85 cm enter the park for free. There is also an Annual Card available for people who plan to visit Mandoria more than once a year.

Various attractions await visitors in the City of Adventures, including family roller-coasters as well as classic carousels and boats floating on the water. A large focus in the creation of many attractions of Mandoria has been to adapt them to increase the rides’ accessibility.

“Mandoria is the first theme park in Poland located so close to a large city: it is only 20 km from Lodz, the third largest city in Poland. We are convinced that it will become an important and frequently visited place for the inhabitants of Lodz and its surroundings. At the same time, it will be one of the most interesting family tourist attractions in Poland, which will attract many tourists to the Lodz Voivodeship,” added Iwona Buchcic, Mandoria’s spokeswoman. “Our park has a great location in the very center of Poland. Thanks to its location, it is an ideal attraction to visit also during longer trips.”

The originator and owner of Mandoria City of Adventures is PTAK S.A. The amusement park is located in Ptak Fashion City, where there are numerous shops and retail outlets, including Ptak Outlet. The investment cost was approximately PLN 110 million (about US$28.6 million). Currently, more than 100 people have found employment in Mandoria. A large part of them are attraction operators and employees of retail outlets and catering services. The 1.5 ha (about 161,000 square feet) amusement park is the first stage of a huge investment. In the future, an open-air zone will emerge next to it. Ultimately, Mandoria City of Adventures theme park will occupy an area of 50 ha (about 5.4 million square feet).