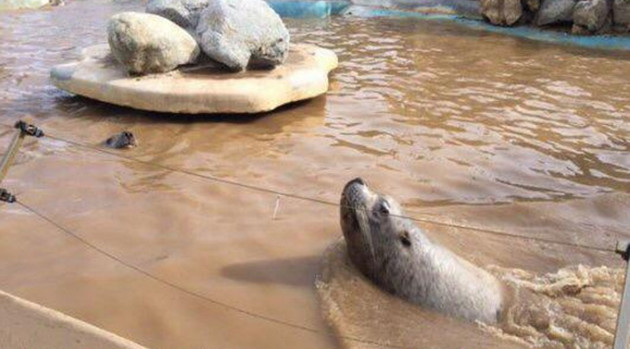 One of the five killer whales has died in the aftermath of the flood.   READ MARINELAND’S STATEMENT HERE.

Marineland reports that all filtration systems are operational and animals are in clean, clear water.

The following animals survived the storm and were able to be saved.  In some areas, this may contradict with earlier information received from the park listed in earlier updates:

At Marineland – eight turtles, all birds including penguins, all dolphins, all five killer whales, all sea lions, and all three polar bears.  At Kid’s Island – ponies, donkeys, lemurs, llamas, pigs, ferrets, gerbils, rats, and all birds.

The following animals are on record as having perished in the storm and flood:

In addition, the park’s tropical aquarium and facilities including the sharks in the walk through tunnel tank, were severely damaged with loss of animal life.

The resort is expected to be fully operational again by February.

The Department of Alpes-Maritimes, which makes up the center portion of the Côte d’Azur or French Riviera, stretches from Menton in the Northeast to Cannes in the Southwest.  Between the two lies Nice, and between Nice and Cannes lies the small resort town of Antibes, home of the Marineland Resort.

Marineland was founded as a marine life park in 1970 and was purchased by Spanish theme park operator Parques Reunidos in 2006.  It is currently completing a 30 million euro expansion transitioning it into a comprehensive resort comprised of the Marineland park, Kid’s Island (interactive rides and animal experiences), Adventure Golf (featuring five miniature golf courses themed to the works of Jules Verne), the Aquasplash waterpark, Marineland Lagoon (a Discovery Cove-type upscale experience), and a resort hotel. 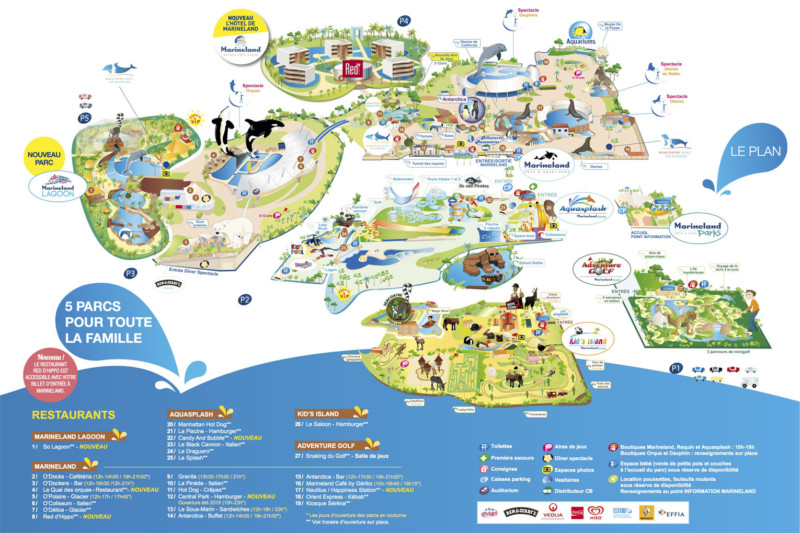 It immediately became clear that the region was unprepared for such a storm and that tragedy would soon follow.  On the second day of the rain, as the Riou de l’Argentière stream in the town of Mandelieu-la-Napoule began to overflow its banks, eight residents of the same neighborhood raced their cars to their underground car parks in an effort to make it home to safety, only to be drowned within minutes by the oncoming surge.

In Cannes, the opulent city best known for its wealthy visitors and famous film festival, nine people were arrested for looting on the second night of the rain, with the police continuing their search for many more. When the rain subsided in Cannes, rats left the flooded basements they usually reside in to feast on detritus that had been swept downhill through the city to its famous beaches.

THE RIVER IS WIDE

Two days of record rain caused streams, creeks, and rivers to swell.  In Antibes, bodies of water ranging from the Brague River (A) to the smaller Vallon des Horts stream (B) grew higher with each passing hour. Where the two converge (C), the force of two raging currents uniting caused a surging high energy wave to crash over the bank early Saturday night.  Some reports state that a levy may have been broken around this point.

The wave first swept through the Pylône campground (D), favored by British retirees, who rent the trailers and mobile homes placed throughout the property.  62 year old British tourist Linda Martinez was drowned inside her trailer as the wave crashed through.

Following the campground, the wave next hit Antibes Land (E), a small local amusement park.  French television network TF 1 reported that children kept from being swept away by waiting out the flood on top of a Toboggan slide. According to the network, a showman unable to make it to his trailer held onto a pole while the water raged around him.

The water then arrived at the wide empty parking lot of the Marineland Resort.  At this point, the crest of the wave was 2 meters/6.5 feet high.  The water spread into multiple directions.  Part of it went into the southern part of the Resort, where it flooded the first floor of the hotel and the park’s sea lion and penguin pools with mud and debris collected from the river and elsewhere along the flood’s journey.  The dolphin show tank was spared due the grandstand’s position in relation to the oncoming wave.  However, the aquarium (F) was hit hard, with all sharks and tropical fish dying due to contamination.

The remainder of the resort, including the waterpark (G) and Kid’s Island were also hit hard.  Most of the smaller petting zoo animals perished.  A Marineland manager reported seeing a fox swimming near the hotel.  The wave circled around the large killer whale stadium, the only facility in continental Europe housing the animals, inundating the five large tanks.  At the same time, it went through a portion of Marineland Lagoon (H), picking up turtles and rays and dropping some of them in an adjacent parking lot (I).  Turtles were found around the property, including one in a flooded filtration room.

Since the storm, the goal of the park’s management has been to bring life support systems, damaged by both flooding and loss of power in the town, back online as soon as possible. The Department of Alpes-Maritimes has made it a priority to bring both Marineland and Biot Glass, whose furnaces were damaged by flooding, back to operational status as they are the two top tourism attractions in the area – Marineland bringing in 1.2 million visitors and Biot Glass 700,000 – tourists that invest heavily in the local economy.

60 firefighters have been assisting park personnel with animal care.  They pumped out dirty water and pumped back in seawater to the tanks.  However, the problem has remained that chillers and filtration are needed to keep the animals alive and healthy.  The park’s management reports that all mammals are alive and accounted for, but many online, both supporters and objectors to such parks, have expressed concern that footage of these animals has been few and far between.

It will take millions of Euros to bring the park back to its pre-storm state.  More immediately, a highly vocal opposition to marine life parks has now added the flooding of Marineland to its repertoire and are discussing bringing up the incident on October 8 during a public hearing in Long Beach, CA, USA, where the California Coastal Commission is expected to vote on approval of SeaWorld San Diego’s proposed Blue World Project. Conversely, the flooding of Marineland could also be to SeaWorld’s advantage should the park be able to show that it has a contingency plan in place for such a disaster.

The other impact on the flood and response is how it might affect the value of parent chain Parques Reunidos. Taken off market a few months ago, Spanish publication El Confidencial reports that Morgan Stanley has provided a prospectus on the company to potential buyers from China.  According to El Confidencial, the two companies that appear most interested are Dalian-Wanda group, which just opened a new outdoor theme park in China and is 20% owner of Atlético de Madrid (one of Spain’s most popular football teams, based in the same city as Parques Reunidos’ headquarters), and Fosun, the owner of Club Med and 51% owner of Thomas Cook’s Chinese operations.  The alleged asking price is 2.5 billion Euros.

InPark will continue to update this piece as more information becomes available.

Antibes, France (October 4, 2015) — Reports from France indicate that the storm related flooding that hit the Côte d’Azur this weekend inundated Marineland with water, mud, and other debris.  Park officials have told French media that they have lost all life support systems and that 90% of the park is currently flooded.

Marineland Antibes is the only location in Western Europe housing killer whales.  The resort, owned by Parques Reunidos, is in the midst of a 30 million Euro expansion.

Joe Kleimanhttp://wwww.themedreality.com
Raised in San Diego on theme parks, zoos, and IMAX films, InPark's Senior Correspondent Joe Kleiman would expand his childhood loves into two decades as a projectionist and theater director within the giant screen industry. In addition to his work in commercial and museum operations, Joe has volunteered his time to animal husbandry at leading facilities in California and Texas and has played a leading management role for a number of performing arts companies. Joe previously served as News Editor and has remained a contributing author to InPark Magazine since 2011. HIs writing has also appeared in Sound & Communications, LF Examiner, Jim Hill Media, The Planetarian, Behind the Thrills, and MiceChat His blog, ThemedReality.com takes an unconventional look at the attractions industry. Follow on twitter @ThemesRenewed Joe lives in Sacramento, California with his wife, dog, and a ghost.
Share
Facebook
Twitter
Linkedin
Email
Print
WhatsApp
Pinterest
ReddIt
Tumblr
Previous articleWanda Xishuangbanna International Resort Opens featuring Company’s First Outdoor Theme Park
Next articleBrick-or-Treat Delights with Fun Frights at LEGOLAND California

Statement from Musée du Louvre on Evacuation of Artwork