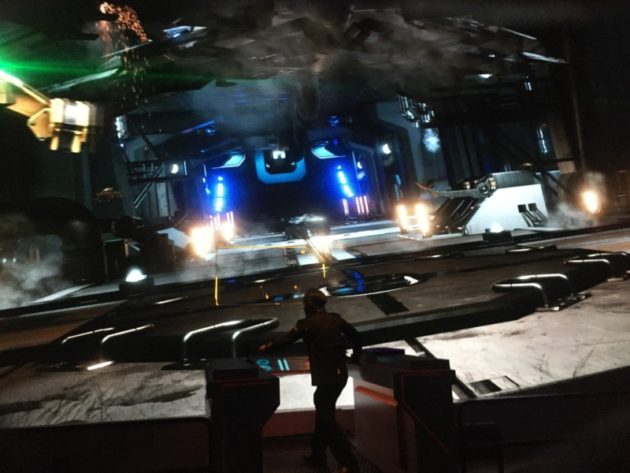 California’s Great America recently gave the former Action Theater a complete overhaul. It re-opened in 2016 as a major new attraction – Mass Effect: New Earth, based on the popular Electronic Arts/Bioware video game franchise. The park’s location in the heart of Silicon Valley proved ideal for the digital technology initiative of parent company Cedar Fair. “We’ve been considering digital technologies in the broader sense of the word,” says Christian Dieckmann, Cedar Fair Vice President of Strategic Growth, “which has resulted in a broad range of new attractions.”

[quote]The 3D projection and audio make it seem as if the ship’s captain is communicating with holographic characters that appear on either side of the actor via the stereographic animation. It is for these reasons that the park calls the attraction a ‘4D Holographic Journey.'[/quote]

Mass Effect: New Earth is a pioneering attraction for a number of reasons:

• Integration of a live actor with pre-rendered video and audio

• New levels of guest immersion into the story and environment thanks to today’s digital technology, tools and integration capabilities

Guests receive passive 3D glasses and are separated into three tiered rows along the exterior of the attraction building. At the end of each row, a monitor shows a three-minute preshow covering the backstory – a trip to a vacation resort on a distant planet.

As they enter the theater, guests find a live actor portraying the ship’s captain. What makes Mass Effect: New Earth stand out from its predecessors is the level of immersion and integration. During the four-minute experience, the 3D projection and audio make it seem as if the ship’s captain is communicating with holographic characters that appear on either side of the actor via the stereographic animation. It is for these reasons that the park calls the attraction a “4D Holographic Journey.”

Mass Effect was designed to break new ground in several ways. It is centered around what is likely the first application of a patented 3D LED screen technology in a permanent attraction. In their twin quests for new technology and IP collaborations, Dieckmann and his Cedar Fair team became acquainted with Los Angeles based firm 3D Live, which specializes in 3D LED screens and virtual reality programming.

“We began experimenting with a live actor placed in front of the 3D screen, interacting with it,” said Nathan Huber, CEO of 3D Live. When Dieckmann paid 3D Live a visit, they showed him a demo. Dieckmann agreed to have 3D Live develop the entire attraction, from concept to set and costume design. Huber and his team would report to Dieckmann and, once Electronic Arts was onboard, to Mac Walters, of Mass Effect developer BioWare.

According to Cantrell: “Nathan and I met to have lunch and talk about a 4D attraction using 3D Live’s LED technology instead of projection. I thought it sounded like a cool project, and we sat and made a napkin sketch of how the different technologies could work together, all coordinated with a Medialon show control system.”

Cantrell continues, “But I also knew that in order for the project to be successful, Nathan would need uncompressed video players for the content to look its best, so I recommended 7th Sense Design media servers and made an introduction right there on the trade show floor.”

Cantrell also led Huber to Electrosonic. “Video playback and LED walls are not all it takes to make a 4D attraction,” says Cantrell. “3D Live would need to collaborate with a seasoned engineering, integration, and project management team familiar with themed attraction work. Medialon has worked on many attractions with 7th Sense and Electrosonic, and I know that whatever these teams band together to create will be simply awesome!”

In addition to its role as turnkey designer and project coordinator on Mass Effect: New Earth, 3D Live would construct and install the screen. Electrosonic would install the preshow, the show control equipment, and the far-field audio in the theater, while Crescendo, recently acquired by its licensee Comhear, installed the near-field audio.

Mass Effect: New Earth utilizes a pioneering application of audio technology developed jointly by the University of California, San Diego and the University of Southampton. The finished product at California’s Great America features 70 far-beam channels, designed by Crescendo and installed by Electrosonic, along with binaural near-field beamforming audio speakers, a form of 3D audio that allows for discreet audio beams to target each ear directly and independently, in a bar placed exactly four feet in front of each rider’s head, its first application in an attraction.

The theater utilizes a semi-circular curvature to its raked seating area, with the front of the theater having been expanded into a large stage area from what previously existed in the Action Theater. At the top of the seating area lies the former projection booth, which had utilized a number of 70mm projectors. It has been turned into the attraction’s control room.

For seating, 3D Live chose MediaMation. The company supplied its MX4D motion effect seats, which include pneumatic motion in six directions and a complement of in-seat effects, which include water and scents emitted from the armrests and neck ticklers built into the seatbacks. The 78 seats (there are also the two wheelchair spots, with near-field audio bars) are separated into four-seat, moving benches. According to Dan Jamele, President of MediaMation, “The key advantage of our pneumatic system is that everything is modular and can easily be switched out with off-the-shelf parts. It responds like a hydraulic system, but with far less maintenance, and far less expense than electric seats.”

There are no seatbelts or harnesses on these 4D seats – which is pretty much unprecedented and unexpected for a motion simulation experience. According to Jamele, “It was very important to avoid seatbelts as it increases the load time.” This, however, does not mean that safety factors aren’t in place. The arrangement is based on an understanding that the real hazard potential is colliding with a moving seat – as opposed to sitting in it. Jamele explained, “Cal/OSHA has extremely strict safety regulations. We’ve added a safety mechanism by which our server can tell if someone leaves his or her seat. If that occurs, it shuts down the entire row of seats, to ensure that someone doesn’t get hit by another rider while trying to exit the row.”

The effects within the MediaMation seats are complemented by many others integrated into the attraction. Crescendo’s nearfield audio is used in conjunction with a film produced by Halon Entertainment, to create 3D holographic effects. The audio gives the impression that the characters are appearing at distinct distances from the screen, surrounding the live actor, the pilot of the ship guests are riding in.

Halon animated the film as a video game cinematic using the Unreal 4 game engine at 4K resolution and 60 frames per second (fps). This was designed to dovetail with the 4K resolution of the screen, made up of 576 LED modules.

Transforming a popular IP from a home gaming platform to a theme park attraction and retaining authenticity to satisfy an exacting audience would be yet another of the challenges met in the creation of Mass Effect: New Earth. The attraction is based on Mass:Effect, the popular series of video games from Electronic Arts studio BioWare, which tells the story of Commander Sheppard, and his attempt to save Earth from an incoming alien menace. The game series combines shooting and role playing elements and offers thousands of potential gameplay possibilities.

According to Clint Reagan of Halon, “We were very sensitive to BioWare’s need for precedent for the existing games. We consistently went back and forth with the BioWare art directors on art directions. The story elements became more challenging. We had to come in line with what they desired. It helped that we hired a number of Mass Effect gamers as artists.”

Reagan noted that one of the biggest challenges was to keep the ride family-friendly while still maintaining the Mass Effect brand and culture – “Violence and sexuality were removed from the ride. We kept action-adventure. We needed to make sure that whatever happens in the ride, there’s no indication of a funeral for anyone.” 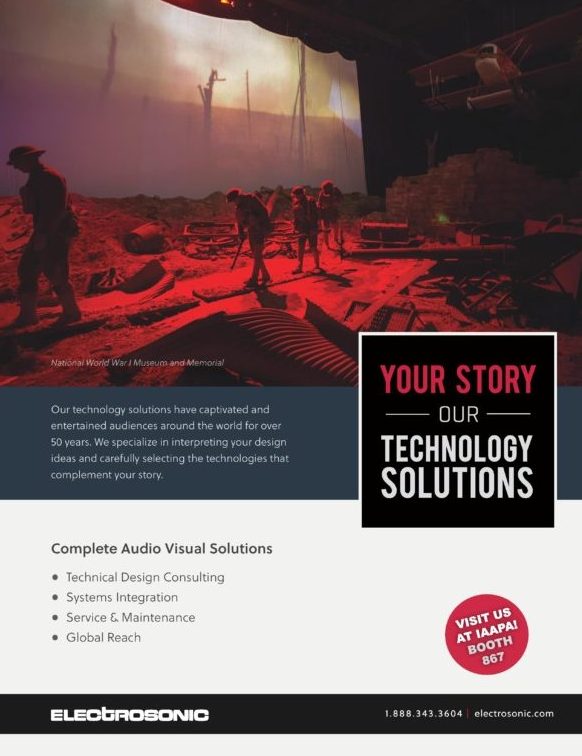 Onsite mixing is generally considered ideal for immersive theme park attractions, but in this case, the theater was not available to test the film and sound mix by Crescendo. Initial tests were done at 3D Live’s offices. Eventually, 2/3 of the screen was built in a Long Beach airplane hangar. “The lower left and right couldn’t see the edge of the screen,” says Reagan, “We tried various depths and made small adjustments in the software by 3D Live. Most of the issues were minor.”

According to Cedar Fair’s Dieckmann, “Mass Effect is an attraction families can enjoy together. It’s skewed towards teens and young adults, but it’s also bringing in fans who might normally not come to the park. It’s important for our park fans to know this is a custom experience built for them, not just a generic experience ported in.”

Mass Effect: New Earth is an integral part of Cedar Fair’s technology initiative, which also includes new physical and virtual architectures for ticketing and the FunPix digital photo platform and smartphone apps. With attractions, this emphasis on digital technology has resulted in the interactive dark rides at other Cedar Fair parks. The new partnership with Electronic Arts also includes an interactive Plants vs Zombies attraction at Carowinds, with additional IP from the gaming company being considered for additional attractions.

Cedar Fair has been redefining the regional park scene, but also the park scene as a whole. These contributions can stand up to what the big operators are doing. Mass Effect: New Earth shows that a regional theme park can now competitively produce and offer high tech, high caliber experiences that rival those of a major destination park. • • •

Joe Kleimanhttp://wwww.themedreality.com
Raised in San Diego on theme parks, zoos, and IMAX films, InPark's Senior Correspondent Joe Kleiman would expand his childhood loves into two decades as a projectionist and theater director within the giant screen industry. In addition to his work in commercial and museum operations, Joe has volunteered his time to animal husbandry at leading facilities in California and Texas and has played a leading management role for a number of performing arts companies. Joe previously served as News Editor and has remained a contributing author to InPark Magazine since 2011. HIs writing has also appeared in Sound & Communications, LF Examiner, Jim Hill Media, The Planetarian, Behind the Thrills, and MiceChat His blog, ThemedReality.com takes an unconventional look at the attractions industry. Follow on twitter @ThemesRenewed Joe lives in Sacramento, California with his wife, dog, and a ghost.
Share
Facebook
Twitter
Linkedin
Email
Print
WhatsApp
Pinterest
ReddIt
Tumblr
Previous articleTHINKWELL GROUP: Being Beijing
Next articleTHE WEBER GROUP: In Memoriam