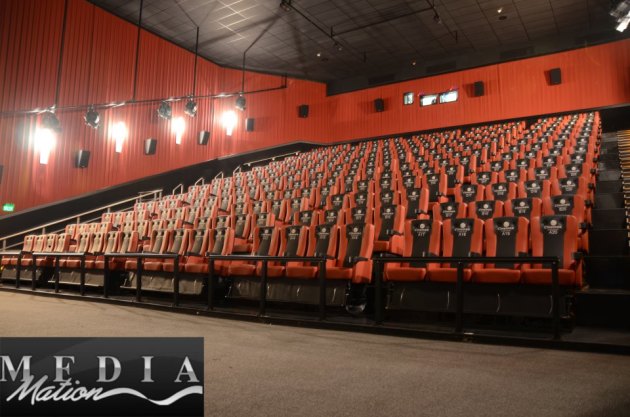 Orlando, FL, USA (November 18, 2014) —  Industry-leading interactive technology house MediaMation, Inc. (MMI) (www.mediamation.com) of Torrance, CA debuts two major innovations at IAAPA 2014 which have the potential to “shake up” the motion EFX theater industry and boost the bottom line for attractions across the globe. The first, a Virtual Reality 4D interactive prototype, is believed to be the first gaming system of its kind to integrate MediaMation’s 4D Motion EFX seats with the widely heralded Oculus Rift Virtual Reality Technology and an interactive gaming controller. The second innovation – a patent-pending arm rest option for MMI’s 4D Motion EFX seats – is designed to enhance the patron experience while resulting in an overall cost savings to operators for theater installation and maintenance.

Featuring custom interactive content by MMI created in collaboration with a RUST LLC interactive content development team, the Virtual Reality 4D prototype will be displayed at MMI’s booth 254 and poised for mass manufacturing and shipment once the consumer version of the new oculus rift virtual reality “motion tracking” headset (CVI) is released – anticipated by many sources to be Q3 of 2015. MediaMation – a veteran, multi award-winning company which has garnered numerous technology-oriented IAAPA, TEA (Themed Entertainment Association) and other accolades throughout its nearly 25-year history, believes its new immersive gaming system will indeed be a “game-changer” for many attraction operators looking for an edge as they continually compete for discretionary entertainment dollars. The MMI 4D Virtual Reality interactive system will allow a network from two to 200 players to interact with the action and one another in a “really cool gaming experience,” observes MMI CTO and founder Dan Jamele.  “The ‘out-of-the-box’ oculus rift technology, combined with our popular 4D EFX seats and user-friendly gaming controllers, will elevate the gaming experience to a new plane. We at MediaMation envision attraction owners setting up ‘pods’ in a room where this new gaming experience can be installed and enjoyed by kids and adults alike.”

In keeping with the company’s ongoing mission to offer cost-effective, user-friendly solutions to attractions and cinemas throughout the world, MediaMation will be offering a ‘sneak peak’ of its first generation, patent-pending arm rest option for its MX4D seats. The special arm rests have the capability to emit wind, air blasts, water blasts, and scent effects on cue to MMI’s 4D motion EFX seat programming. This arm rest innovation essentially replaces the need for setting up a network of fans throughout the theater that would traditionally serve the purpose of helping create these effects.

According to Jamele, operators who purchase this arm rest option will likely save money in overall theater installation costs due to no more need for effects fans, their maintenance or the energy expenditures to run them. Meanwhile, valued patrons – whether sitting in row 2 or row 15 – will enjoy a more uniform, and thus, enhanced, immersive entertainment experience via the special arm rests.

Joe Kleimanhttp://wwww.themedreality.com
Raised in San Diego on theme parks, zoos, and IMAX films, InPark's Senior Correspondent Joe Kleiman would expand his childhood loves into two decades as a projectionist and theater director within the giant screen industry. In addition to his work in commercial and museum operations, Joe has volunteered his time to animal husbandry at leading facilities in California and Texas and has played a leading management role for a number of performing arts companies. Joe previously served as News Editor and has remained a contributing author to InPark Magazine since 2011. HIs writing has also appeared in Sound & Communications, LF Examiner, Jim Hill Media, The Planetarian, Behind the Thrills, and MiceChat His blog, ThemedReality.com takes an unconventional look at the attractions industry. Follow on twitter @ThemesRenewed Joe lives in Sacramento, California with his wife, dog, and a ghost.
Share
Facebook
Twitter
Linkedin
Email
Print
WhatsApp
Pinterest
ReddIt
Tumblr
Previous articleNew Polin Technologies Offer Light and Sound Experiences for Waterslides
Next articleGiant Screen Cinema Association Announces 2015 Board of Directors