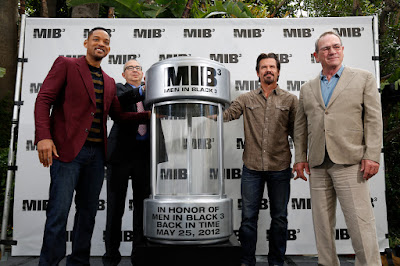 Culver City, CA, USA /PRNewswire/ — On May 3, in anticipation of the nationwide release of the action adventure comedy Men in Black™ 3, in theaters May 25, the cast and filmmakers donated memorabilia from the film into a time capsule that began a cross country tour next week. Following the tour, the time capsule will be locked away for 43 years – mirroring the jump back in time from 2012 to 1969 that Agent J experiences in the film.

The Men In Black 3 time capsule was dedicated at an event at the Four Seasons hotel in Beverly Hills, where the movie’s stars Will Smith, Tommy Lee Jones, and Josh Brolin, as well as director Barry Sonnenfeld, contributed a neuralyzer, sunglasses, and other props and costumes from Men in Black 3 to the time capsule.

The time capsule is traveling to San Francisco, San Diego, Las Vegas, Phoenix, St. Louis, Dallas, and Miami, where local television press will contribute items that represent their cities. The time capsule tour will end in New York City, where it will make appearances at the Intrepid Sea, Air and Space Museum and at the World Premiere of the film. Following the movie premiere, the time capsule will be entrusted to NASA, which will lock away the capsule at Cape Canaveral for 43 years.

Commenting on the announcement, Sonnenfeld said, “In Men in Black 3, Agent J goes back in time 43 years to 1969, and it’s exciting to think that 43 years from now, we will have the same chance when we open up this time capsule. It’s full of great memories of the making of this movie and I can’t wait to see what all of the tour cities contribute.”

In Men in Black™ 3, Agents J (Will Smith) and K (Tommy Lee Jones) are back… in time. J has seen some inexplicable things in his 15 years with the Men in Black, but nothing, not even aliens, perplexes him as much as his wry, reticent partner. But when K’s life and the fate of the planet are put at stake, Agent J will have to travel back in time to put things right. J discovers that there are secrets to the universe that K never told him — secrets that will reveal themselves as he teams up with the young Agent K (Josh Brolin) to save his partner, the agency, and the future of humankind. Barry Sonnenfeld directs the film. The film’s screenplay is written by Etan Cohen, based on the Malibu Comic by Lowell Cunningham. Walter F. Parkes and Laurie MacDonald produce, and Steven Spielberg and G. Mac Brown are the executive producers.

Joe Kleimanhttp://wwww.themedreality.com
Raised in San Diego on theme parks, zoos, and IMAX films, InPark's Senior Correspondent Joe Kleiman would expand his childhood loves into two decades as a projectionist and theater director within the giant screen industry. In addition to his work in commercial and museum operations, Joe has volunteered his time to animal husbandry at leading facilities in California and Texas and has played a leading management role for a number of performing arts companies. Joe previously served as News Editor and has remained a contributing author to InPark Magazine since 2011. HIs writing has also appeared in Sound & Communications, LF Examiner, Jim Hill Media, The Planetarian, Behind the Thrills, and MiceChat His blog, ThemedReality.com takes an unconventional look at the attractions industry. Follow on twitter @ThemesRenewed Joe lives in Sacramento, California with his wife, dog, and a ghost.
Share
Facebook
Twitter
Linkedin
Email
Print
WhatsApp
Pinterest
ReddIt
Tumblr
Previous articlePROGRAM REMINDER: "Confederate Flying Machine" tonight at 8:00 pm on National Geographic Channel
Next articleHistory Colorado Center Now Showcasing State’s History in State of the Art Facility in Downtown Denver