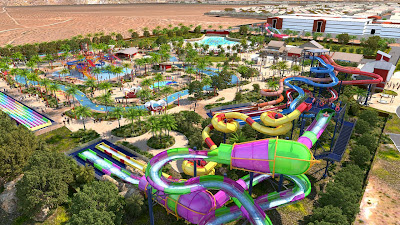 Located in the entertainment capital of the world, this world class water park will be fun for the whole family, featuring a spectacular line-up of more than 25 slides and attractions including North America’s firstRattler slide.

The strategically positioned parcel of land will be leased from The Howard Hughes Corporation. Investors in the more than $50 million water park include Andre Agassi and Steffi Graf, Dr. Steven and Karen Thomas of the Thomas and Mack family, Roger and Scott Bulloch of SPB Capital Partners, Steve Miller and Australian entertainment conglomerate Village Roadshow Limited.

“This will be an incredible water park, the perfect addition for this fun-filled town, featuring a huge range of experiences designed for both families and thrill seekers,” said Agassi.

“We are very excited to bring this amazing new water park to the perfect city that is Las Vegas,” said Tim Fisher, chief executive officer of Village Roadshow Theme Parks. “The park will feature some of the world’s most incredible slides and will offer an experience unlike anything Las Vegas residents and visitors have ever seen before.” 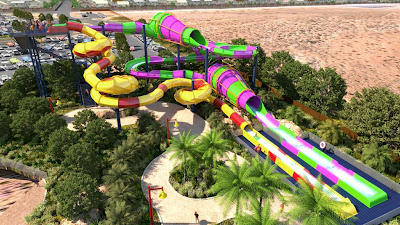 “Wet ‘n’ Wild Las Vegas has the potential to entertain more than 650,000 guests annually, providing them with a world class day of family fun. Together with Phoenix and Hawaii, Village Roadshow Theme Parks will soon entertain well over a million guests at our North American water parks each year,” said Fisher. “The local government and business support we have received for this project has been unprecedented. In particular, County Commission Chair Susan Brager has offered her full support to this project, and we are confident this will be another hugely successful attraction for Las Vegas.”

Wet ‘n’ Wild Las Vegas will be a more than $50 million world class attraction perfect for families and thrill seekers alike. Adrenaline junkies can enjoy heart-pounding slides such as the Canyon Cliffs, which will send riders on a gut-wrenching 60-foot freefall racing at speeds of up to 33 feet per second. Kids will love the multi-level interactive children’s aquatic adventure playground, while those seeking a more relaxing time can float around the Colorado Cooler. The park also will feature a host of world class attractions including a giant wave pool,North America’s first Rattler and much, much more!

About Wet ‘n’ WildLas Vegas:
Wet ‘n’ Wild Las Vegas will be Nevada’s largest water park and home to more than 25 exhilarating slides and attractions. The 41-acre park will be located at 7055 S. Fort Apache Rd. ,Las Vegas, NV 89148 in southwest Las Vegas near the I-215 and Sunset Road. The attractions will range from extreme water slides designed to get hearts racing to family friendly interactive play areas. The more than $50 million park will be located on an ideally located parcel of land leased from The Howard Hughes Corporation. Investors in the project include Andre Agassi and Steffi Graf, Dr. Steven and Karen Thomas of the Thomas and Mack family of Las Vegas,Roger and Scott Bulloch of SPB Partners and Australian entertainment conglomerate Village Roadshow Limited which also will manage the park along with holding a 51% ownership. Wet ‘n’ Wild Las Vegas is scheduled to open in May 2013. For more information, visit WetnWildLasVegas.com.

About Village Roadshow Limited:
Internationally recognized as one of the largest and most diverse entertainment companies in the world, Village Roadshow Limited (VRL) has investment portfolios in many businesses including cinemas, music production, theme parks and movie production and distribution. To date, VRL has produced 66 films with global box office takings of more than $10 billion, including blockbuster hits such Oceans 11, 12 & 13, Happy Feet, I Am Legend and Sherlock Holmes. VRL is also Australia’s largest theme park operator with Sea World, Warner Bros. Movie World, Warner Roadshow Studios and Sea World Resort among its Gold Coast portfolio. The company’s flagship water park, Wet ‘n’ Wild Water World, also located on Australia’s Gold Coast, consistently is recognized as one of the top water parks in the world and entertains more than one million visitors each year. Village Roadshow also is currently developing a $115 million Wet ‘n’ Wild ‘super park’ in Sydney, Australia.

Joe Kleimanhttp://wwww.themedreality.com
Raised in San Diego on theme parks, zoos, and IMAX films, Joe Kleiman would expand his childhood loves into two decades as a projectionist and theater director within the giant screen industry. In addition to his work in commercial and museum operations, Joe has volunteered his time to animal husbandry at leading facilities in California and Texas and has played a leading management role for a number of performing arts companies. Joe has been News Editor and contributing author to InPark Magazine since 2011. HIs writing has also appeared in Sound & Communications, LF Examiner, Jim Hill Media, and MiceChat. His blog, ThemedReality.com takes an unconventional look at the attractions industry. Follow on twitter @ThemesRenewed Joe lives in Sacramento, California with his fiancé, two dogs, and a ghost.
Share
Facebook
Twitter
Linkedin
Email
Print
WhatsApp
Pinterest
ReddIt
Tumblr
Previous articleMiziker Entertainment Brings Resident Evil to Terrorize Universal Studios Japan
Next articleVOA Associates Leading Redesign of Walt Disney World’s Royal Plaza Hotel into B Resort