Among many other things, the annual IAAPA Attractions Expo serves as a marketplace for ideas. It is often the first and last stop in the development process. Dreams start to coalesce. Deals are made. Products emerge from R&D. Projects are launched.

We’ve collected some of the promising ideas featured at the 2016 IAAPA Expo:

An improved model of DNP’s popular kiosk photo printer, the SnapLab+ is a lightweight, low cost solution for the event and attractions markets. The printer can be set up for a customer interface, and can accept photo files wirelessly. The system offers custom frames and borders and also produces panoramic photos at the touch of a button.

DNP also teased about new products launching in January 2017: the new WPS Pro will include a screen for easier control and a brand new ID making solution will also be brought to market.

Visual effects company Pixomondo is working with National Geographic installing a virtual aquarium in Times Square. The project encompasses nine different film environments featuring a variety of projection styles and screens, culminating in a half dome show. The story-driven project opens in New York next August.

Holovis is continuing to build on the extended experience they helped develop this year for Cedar Point. In addition to helping roll out the technology for other Cedar Fair parks, they are working on the next version of the concept, which means more in-depth interactions with guests.

Phase three of the project will include integrating the experience at the ride level. Content will be redesigned to allow guests to interact with the ride, especially the ride vehicle. Expect more information to be announced by the end of 2017.

Plans have been confirmed for the creation of a new 80-acre waterpark in the Outer Banks area. Aquatic Development Group, Inc. (ADG) is designing the park. The Weber Group is responsible for design and fabrication of non-water themed elements throughout the park. “This is a great opportunity to work with our partners at ADG,” said Weber President Donny Weber. “We have worked together well before and are excited to collaborate on this great project.” 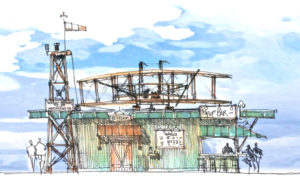 The park borrows from pirate culture as well as the Wright Brothers in its theming. “The concept is to create the look and feel of an upscale resort while still being a family-friendly waterpark,” said Weber.

The first phase includes the outdoor waterpark. A second phase is set to include an outdoor adventure park. “It is a large site and large facility, so we have room for people to relax and spread out,” said Weber. The park signals the end of a dry spell for new waterpark construction in the US. Recent projects like Camelback Park and Typhoon Texas are proving the market still has room for expansion.

H2OBX is targeted to open by Memorial Day 2017.

JRA is working on a host of projects for 2017 and beyond, most of which fall into corporate brand experiences or quirky unusual concepts. On the brand side, JRA is doing design, planning, and project management for the Appleton Estate Rum Tour in Jamaica. The tour will cover 23,000 square feet of renovated and new space, including a tasting room, restaurant and retail.

On the quirky side, JRA is also doing design and planning for the National Mascot Hall of Fame, slated to open in Whiting, Indiana (USA) in 2018. The Hall of Fame currently only exists in digital format, but the new experience will be tied to state and local curriculum to make it appealing for school visits. Exhibits within the 25,000-square-foot Hall of fame include “The Phuzzical Education Department” and the “Science of Silliness Lab.”

Finally, on the serious side, work is progressing on Science Centre Singapore’s “Illusion and Human Perception Gallery.” JRA is currently providing planning and design for the entry gallery. The project deals with illusions designed to puzzle all your senses. The scheduled May opening will be just in time for visits during IAAPA’s Asian Attractions Expo.

Vortex was showing off recent projects such as Singapore’s only indoor waterpark, SAFRA Punggol. The park features a Oceanic-themed splash pad and water play structure.

The Westgate Town Center Resort in Kissimmee, Florida includes a pirate-themed play structure and splash pad. Of particular note is a waterslide that goes through the splash pad into a pool area located below. Since opening the attraction, the resort has reported an increase of sales to the tune of roughly $1 million per week.